City councilors Bill Linehan (South Boston, South End, Chinatown) and Frank Baker (Dorchester) will try for legislative approval to let Boston charge up to a 2% tax on sales of alcohol in local liquor stores and restaurants as a way to curb substance abuse in the city.

The two will ask the council tomorrow to start the ball rolling on their proposal, which they say would not only help alcoholics and addicts but the city as a whole by reducing the amount of crime related to substance abuse.

If the rest of the council agrees, a council committee will hold a hearing on the proposal, after which the council would vote on it.

Not all councilors loving the idea of BYOB

City Councilors Ayanna Pressley (at large) and Bill Linehan (South Boston, South End, Chinatown) both say they love the idea of increasing the number of restaurants that can serve alcohol in Boston, but both are saying they have major concerns about a proposal by Councilors Michelle Wu and Steve Murphy to let smaller eateries offer BYOB service.

City Councilors Bill Linehan (South Boston, South End, Chinatown) and Steve Murphy (at large) will try once again to persuade the state legislature to let Boston residents over 55 who meet certain income requirements defer parts of their property tax until they sell their homes.

Linehan says the matter is even more urgent now that the city has come out with revised property assessments, which he said are really hitting long-time residents of his district hard - he said he himself has seen his quarterly tax bill rise $200 due to the latest assessments.

City Council wants its say on the Olympics

A City Council committee on Friday considers setting up another committee to let councilors examine the implications of the 2024 Olympics bid.

Bill Linehan has a Mini-Me 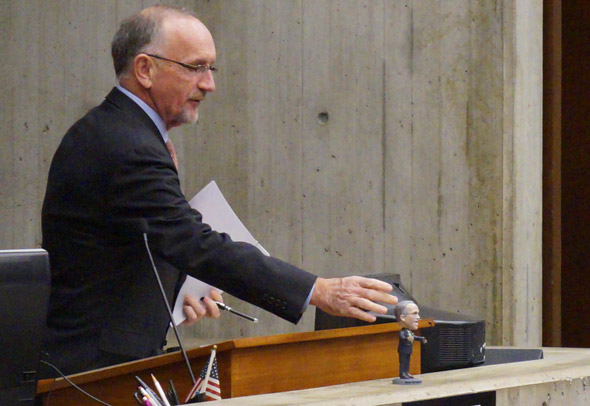 City Council President Bill Linehan presided over today's council meeting with the help of his very own Bill Linehan bobblehead.

Councilors demand to know: Why was BPL president getting bonuses when workers were foregoing raises to save libraries?

Linehan has vociferously backed increasing councilor pay to $112,500, saying councilors are well worth it, have not gotten raises in eight years and cost city residents less than $9 apiece a year. But at a hearing on Monday, a city attorney warned councilors could be risking fines and prison time if they gave themselves pay hikes under state conflict-of-interest laws.

Linehan: Bostonians don't realize what a value the city council is

It costs the average Bostonian just $8.60 a year to enjoy all the amenities of its current City Council, Bill Linehan (South Boston, South End, Chinatown, downtown) said today, urging his fellow councilors to support raising their salaries to $108,500 - which would be the first raise since 2006.

The council agreed today to have its committee on government operations hold a hearing on the proposed pay increase before the council votes on it.

Councilor Bill Linehan (South Boston, South End, Chinatown) tomorrow asks the City Council to consider a proposal that would let people over 55 who have lived in their homes at least ten years defer payment of their city property tax until they sell the property or die.

In his request for a hearing on the matter, Linehan says the measure would let longtime residents stay in their homes even as their property taxes skyrocket due to the effect of the well off snapping up all the properties around them at ever escalating prices.

City Council could vote itself some raises

The Globe reports on Council President Bill Linehan's proposal to increase councilor salaries about 29% - to $108,500.

Two kinds of city councilors: Those who use services like Uber and those who don't

The City Council agreed today to hold a hearing on how to regulate Uber, Lyft and other ride-sharing services.

Councilors Bill Linehan - who proposed the hearing - and Steve Murphy said it was time for regulation to protect public safety and out of fairness to existing medallion owners, who are subject to scrutiny by the police hackney division.

City Council President Bill Linehan says it's time to bring companies such as Uber and Lyft under the same sort of regulations already that taxi and pedicab operators already have to follow.

On Wednesday, the city council considers a request from Linehan for a hearing on how to give city regulators say in the operation of the new services:

The past is always prologue in Boston: Three councilors refuse to vote to recognize Brown v. Board of Education

David Bernstein takes a look at a resolution before the City Council today to recognize the 60th anniversary of the Supreme Court's desegregation ruling. Ten councilors voted for it while councilors Bill Linehan, Steve Murphy and Sal LaMattina voted "present."

LaMattina and Murphy talked to Bernstein about why he voted that way; Linehan and Yancey, who sponsored the measure, didn't return his calls.

Boston's most powerful politician bestrides the Atlantic like a Colossus

UPDATE: The Limerick Leader has revised its story and now calls Linehan merely ONE of Boston's top politicians. You know what this calls for, of course:

If he can't have his cake, he'll just fly to Ireland instead

Rather than just sitting there at the St. Patrick's Day roast while that woman from Dorchester MCs, City Councilor Bill Linehan will instead be in Limerick, Ireland, the Globe reports.

Councilors say they were lied to and misrepresented on pot dispensaries

The Boston City Council today called for a hearing on the medical-marijuana dispensaries the state recently approved for Boylston Street in the Back Bay and Southampton Street on the South End/Roxbury line.

Councilor Steve Murphy (at large), who submitted a letter of "non opposition" to the general idea of dispensaries was blunt: "I was lied to" by the operators of the proposed Boylston Street facility - who listed him as supporting their specific location.

The council is scheduled today to consider his request for a formal hearing on his proposal.

In addition to naming chairs of council committees and presiding over council meetings, Linehan would become mayor should anything happen to Marty Walsh.

MassLive reports at-large Councilor Ayanna Pressley has decided she'd like a go at running the City Council and so will make fellow councilors choose between her and District 2 Councilor Bill Linehan.

On the other side of the fifth floor at City Hall, Marty Walsh has selected a former aide to Tom Menino and a current exec at the Huffington Post as his chief of staff, the Dorchester Reporter reports.

The city council today voted 12-1 to ask the legislature to lift the current state cap on liquor licenses in Boston and return control of the Boston Licensing Board to the mayor.