LaMattina might run to fill Edwards's council term, but would vow to focus on constituent services and not run again

Sal LaMattina, who retired from the District 1 City Council seat that Lydia Edwards won in 2017, is talking to supporters about possibly running for the seat again after Edwards is elected to the State Senate next month. Read more.

East Boston getting denser: Board approves slew of projects, none of which will include affordable units

The Board of Appeal today approved a total of 27 new residential units across East Boston. Because none are in projects of 10 or more units, all can be sold at market or luxury rates, with no units designated for people making less than the median income.

In a sign of political changes to come in the neighborhood, though, incoming City Councilor Lydia Edwards, who takes office in January, opposed two of the projects supported by outgoing Councilor Sal LaMattina. Read more.

LaMattina, first elected in a special election in 2006, joins Bill Linehan (South Boston, South End, Downtown, Chinatown) and Tito Jackson (Roxbury) in the retirement club - although Jackson hopes to move to get elected mayor instead.

The Boston City Council today approved looking into how to regulate rental services like Airbnb from laying waste to neighborhoods and harming local hotels and workers while also protecting poor homeowners who increasingly rely on the services to make ends meet and stay in the city. Read more.

Medical-marijuana dispensary in East Boston gets nod from City Council

The Boston City Council voted unanimously today to write a letter of "non-opposition" for a medical-marijuana dispensary proposed for 220 McClellan Highway in East Boston. Read more.

Boston City Councilor Sal LaMattina says he sometimes gets frustrated with the otherwise beautiful view from Piers Park in East Boston: He can see the Seaport in South Boston, but knows the only way to get there by public transportation is via three subway lines and a bus. Read more.

The City Council today gave BTD approval to expand a Charlestown pilot project in which street-sweeping fines would go from $40 to $90 - but the city wouldn't tow any cars.

The council passed the measure only after including a provision that no neighborhoods get the changes regulation without a public hearing first. Read more.

At last minute, council puts off vote on limiting number of pot shops in Boston

The City Council almost voted today on a zoning change that would prohibit both medical marijuana dispensaries and potential recreational pot shops from being closer than a mile to each other. Read more.

New war erupts around Sam Adams - this time, between street performers jostling for space under his statue

With additional reporting by Kayla Canne.

City Councilor Sal LaMattina says he enjoys street performers. But faced with complaints about "bullying" from the amplifier-enhanced dancers in front of Faneuil Hall - from both tourists and other performers - he says it's time for Boston to consider some sort of busker regulations. Read more.

The city council tomorrow considers their request for a hearing on a proposed ordinance that would require street performers to wear their permits - and to show them to inquiring police officers and to stay at least 100 feet away from elementary schools and hospitals - and at least 50 feet away from other buskers. Read more.

Packie owners to City Council: Don't tax us more to pay for substance-abuse programs, just wait until pot is legalized and tax the hell out of that 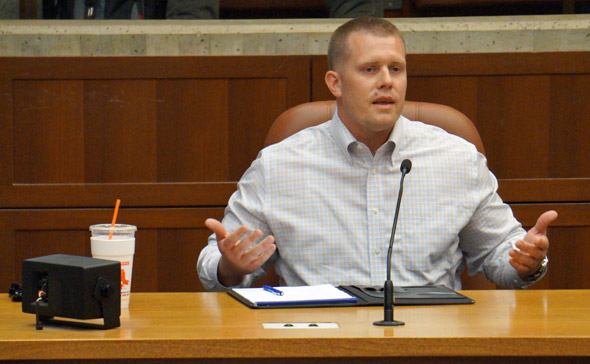 Substance-abuse experts and recovering addicts say a proposal by City Councilors Bill Linehan and Frank Baker to fund new treatment programs through a 2% tax on Boston alcohol sales could provide new beds - and new hope - to addicts who now have to wait long periods for help.

Councilor: City needs to keep Airbnb and its ilk from turning residential areas into hotel zones

The City Council on Wednesday considers a request to begin looking at possible regulations over online services that let people rent apartments, such as Airbnb - and even Craigslist.

Globe Direct: Yeah, our drivers shouldn't just be flinging the things out their car windows

Officials from the Boston Globe and the company it hired to distribute its advertising circulars told angry city councilors at a hearing today they're willing to try to keep Boston from being papered over with the circulars.

Councilors to vent ire at Globe Direct trash at hearing next week; public invited to join in

A City Council committee next week attempts to bring Globe Direct to task for its unceasing efforts to plaster Boston's porches, sidewalks and shrubs with its advertising circulars.

The hearing, by the council's Committee on City, Neighborhood Services and Veterans Affairs, starts at 4 p.m. on Thursday in the council's fifth-floor chambers in City Hall.

City councilors say Globe Direct circulars are not just unsightly, they're a threat to public safety

City councilors from across the city said today their constituents are complaining about the seemingly unstoppable onslaught of plastic-sheathed Globe Direct ads.

The past is always prologue in Boston: Three councilors refuse to vote to recognize Brown v. Board of Education

David Bernstein takes a look at a resolution before the City Council today to recognize the 60th anniversary of the Supreme Court's desegregation ruling. Ten councilors voted for it while councilors Bill Linehan, Steve Murphy and Sal LaMattina voted "present."

LaMattina and Murphy talked to Bernstein about why he voted that way; Linehan and Yancey, who sponsored the measure, didn't return his calls.

At a City Council meeting today, O'Malley said Boston's maximum littering fines are only $25, compared to $300 in New York and $1,500 in Chicago.

O'Malley also wants to look at expanding the city "hokey" program, in which workers with trash bins on wheels go around business districts cleaning up and introducing new technolgy, such as the sort of "binless bins" the T uses for recycling newspapers.

Election roundup: Connolly gets some endorsements, too

A progressive leader who understands the importance of keeping families in the city by transforming our schools, creating more affordable housing options, and building safe and healthy neighborhoods throughout the city.

Connolly has scheduled "an endorsement event" at his Roxbury campaign office at 5:15 p.m. today. Gosh, who could that be?

Election roundup: Casino as the circular firing squad of the mayoral race

Up until now, the candidates have mostly contented themselves with playing up their own platforms on issues. Casinos, however, change everything.

Mike Ross blasted Dan Conley for calling for a citywide referendum on the Suffolk Downs proposal and threatening to sue to stop an Everett casino if Suffolk Downs goes down in flames: