Ferry service between East Boston and Seaport to start next week

Charlestown getting its ferries back

The MBTA announced today that it'll be using some of that sweet federal stimmy to resume the Charlestown and Hingham ferries it had canceled in January because of Covid-19-related lack of demand, starting May 22. Read more.

Soon may the ferryman come 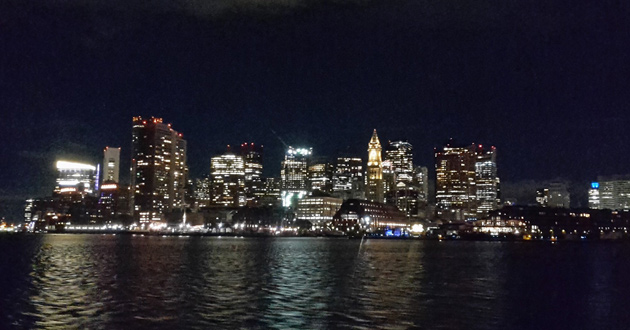 David Gregory snapped this view of downtown Boston from the last ferry out of Charlestown tonight, after which the T is shutting down the service because of Covid-19-related losses.

CommonWealth Magazine reports on MBTA planning for service in an era when ridership remains way down due to Covid-19. Bus routes serving low-income communities, where demand has not collapsed, might be protected from cuts.

Maverick Square to get a new ferry dock

Mayor Walsh today announced a temporary ferry dock will be install at Lewis Mall, next to the Maverick Square T stop, this summer, with a permanent dock to come next summer. Read more.

WCVB reports a ferry from Hull ran aground on Long Island this morning after being cut off by a "sport fishing boat." Photos from the evacuation.

WBUR reports on calls for ferry service between Downtown and Columbia Point in Dorchester.

Groaning commuter rail, ferries struggle to keep up with all the people 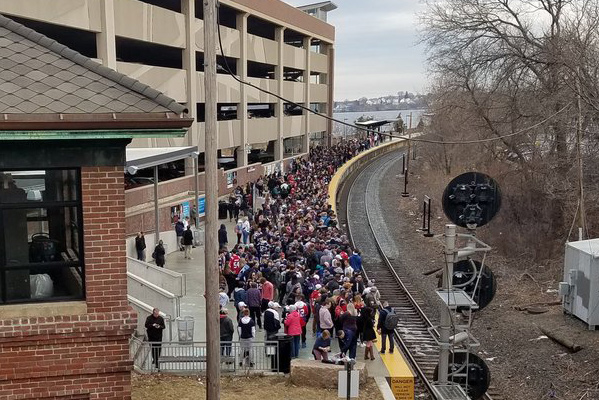 Claire Blechman captured the scene at the Salem commuter-rail stop shortly before 9 a.m. She reports some people opened an unmanned door on an outbound train and got on, which is either very dumb or very smart. Read more.

Mean rider on one ferry from the South Shore

"Meanest MBTA ferry customer I have ever shared a shared a boat with," Nathan Peyton reports.

NorthEndWaterfront.com reports state transportation officials are looking at possible routes for a ferry that would shuttle between the downtown/North End side of the Harbor, the South Boston Waterfront and the East Boston/Charlestown side of the briny shallow. The exact routes and stops are still under study.

Boston City Councilor Sal LaMattina says he sometimes gets frustrated with the otherwise beautiful view from Piers Park in East Boston: He can see the Seaport in South Boston, but knows the only way to get there by public transportation is via three subway lines and a bus. Read more.

Nick Puleo is livetweeting his commute this morning on a ferry from Hingham. After leaving paint on the ice, the ferry got stuck and now a tug from New Jersey is trying to pull the boat out.

Heard on the ferry: "I'd rather die on this boat than sit on the GD commuter rail"

Now this is a real icebreaker 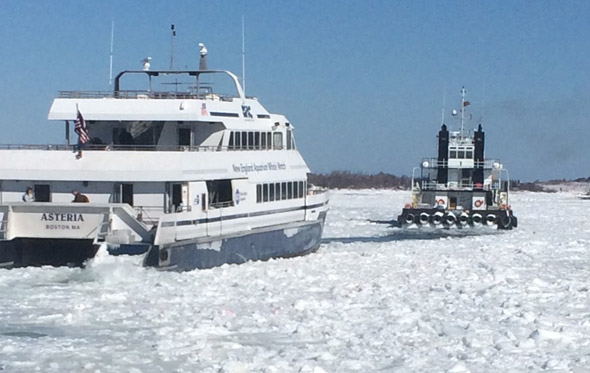 In Karhide, on the planet Gethen, ferry voyages always include an icebreaker sent ahead.

In Hingham harbor, as well.

A Boston-to-Lynn ferry ran aground off Nahant shortly before 8 p.m., according to Steve Deveau, one of the passengers aboard it.

Deveau reports the ferry was the Cetacea, the same ship whose passengers spent a night in the harbor last month when its propeller became entangled in a cable at an LNG offloading area off Nahant.

Deveau says unlike that ill-fated trip, he and his fellow passengers were offloaded around 10 p.m.

Lynn may never get the Blue Line, but it could get a ferry soon

The Boston Business Journal reports Lynn is looking to hire a company to run a ferry to Boston this year.

The T's started soliciting bids from companies willing to bolster WiFi service on the Purple Line and ferries in exchange for advertising opportunities, starting with painting over the AT&T logos now on the sides of commuter-rail trains (unless, of course, AT&T bids and wins). According to a T press release:

Starting tomorrow, riders on all commuter-rail and ferry lines will be able to use their Android or iOS phones instead of paper tickets. People who use the mobile tickets will get a $10 discount on monthly passes.

Still no integration with CharlieCards, however.

MBTA Transit Police tweet this morning a fuel-truck driver died after being hit by his own truck at the Quincy Shipyard. The Herald reports the brakes on his truck failed as he was pumping fuel.

Could the FAA sink possible Massport takeover of harbor ferries?

No, not because Massport would want to buy some 40-story ferryboats if it agrees to take over ferry service from the MBTA but because the FAA is concerned the authority might use some of its airport revenue to subsidize commuter boats, Jon Chesto reports. T officials have floated the idea of handing the ferries over to Massport as a way to keep them running as the T runs out of money.

Also see: Riders of the Hull ferry talk about the proposed end of their commute: