Verizon will pull the copper plug in 2018

A heads up to those on Verizon regular telephone or DSL service. Verizon will decommission copper wire service in Massachusetts starting in 2018.

The web address below explains what will happen. PDF documents for Massachusetts are linked. Read more.

Verizon officially announces FiOS expansion, including in neighborhoods they'd been wiring up for weeks now

Verizon announced today it will soon make its FiOS Internet/cable/phone service available in all of Jamaica Plain, Hyde Park, Mattapan, Roslindale and Roxbury, and in parts of South Boston, including the waterfront. Read more.

Hizzona signed an agreement letting Verizon offer TV channels and the company says it begins cabling up homes in parts of West Roxbury, Roslindale and Dorchester tomorrow - with Dudley Square by the end of the year. The move means parts of Boston now have three main broadband/TV/phone providers: Verizon, Comcast and RCN; Verizon says it will roll out FiOS to the entire city within six years.

Shake, rattle and FiOS in Dorchester

The Dorchester Reporter reports that Verizon's FiOS rollout is making life hell for people living near the Enterprise Street garage where all the FiOS trucks are based.

Abutting full-time residents say the clamor at the facility is disturbing them through the evening into the early morning hours before picking up again a few hours later, often before 6 a.m.

Verizon and city officials said tonight that if they reach agreement on a cable contract, the company will roll out its FiOS service to four Boston neighborhoods using its traditional fiber-optic cables right to people's homes or buildings. Read more.

City officials and Verizon reps hold a meeting next week on the $300 million deal that's supposed to usher Boston into the next generation of communications greatness, or at the least provide an alternative to Comcast in the roughly 70% of the city not already served by RCN. Read more.

Parts of Dorchester, Roxbury, West Roxbury and Roslindale could be first to get FiOS 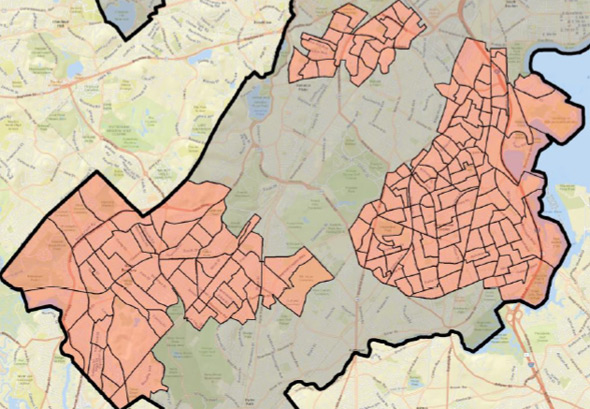 Verizon has filed updated plans with the city for its roll out of FiOS Internet, phone and cable service that show that West Roxbury and parts of neighboring Roslindale, most of Dorchester, the area around Dudley Square, would be the first areas in the city to get the Comcast competitor. Read more.

The FiOS Farce: A bait and switch

I normally would not quote two articles from the Huffington Post, but they are Boston specific and make a ton of sense to me.

I've been trying to figure out this whole FiOS rollout in Boston. There has to be a sweet deal in there for Verizon for them to re-neg on years of telling the city, "No, no FiOS for you". Now I have the smoking gun. Read more. 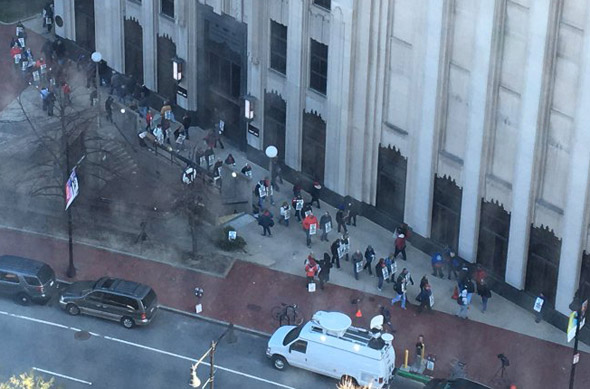 Casey Liston looks down from her office at 100 Cambridge St. at Verizon workers, now on strike.

Mayor Walsh today announced a deal in which Verizon will spend $300 million to bring its FiOS fiber-optic cable/Internet service to Boston.

Under the deal, the company will also attach wireless modems to city street lights and utility poles to provide better 4G and eventually 5G services to its wireless customers. Read more.

Boston city councilors on Verizon FiOS: Screw that, city can find an alternative

City Councilor Matt O'Malley (Jamaica Plain, West Roxbury) says Comcast just isn't cutting it for Boston and wants to look into ways to get Verizon to bring its fiber-optic connections into town - or other companies or utilities that might do so.

RCN isn't really competition enough for Comcast and with FiOS stopping at the city line, Boston is in danger of falling on the wrong side of the digital divide for a lack of competition, O'Malley said at a City Council meeting today. Read more.

Verizon dropped the local Fox affiliate from its Boston-area system today in some sort of contract dispute, meaning lots of people outside Boston didn't get to watch football. Except for a tiny sliver of Dorchester, Verizon never cabled up Boston, in part due to a long-running dispute with Tom Menino and now the company has stopped expanding its service anyway.

Citizen complaint of the day: Enough with the phone books already

An annoyed citizen complains about the scene on Mt. Vernon Street on Beacon Hill:

Verizon phone books left on street; who uses them anyway!!!!

Citizen complaint of the day: Why are phone companies still allowed to kill trees?

An eco-citizen on Beacon Hill complains of the annual December infestation of phone books:

Litter everywhere! Why are the phone companies allowed to dump a dead tree on everyone's doorstep?

A persnickety citizen complains about these bundles of phone books on Mt. Vernon Street on Beacon Hill:

Verizon phone books left on street; who uses them anyway!!!!

UPDATE: Service came back on shortly after 4 p.m.

800 Boylston is the Prudential Center. One frustrated network administrator says the outage is going on 15+ hours:

Affecting hundreds of companies in Boston and Cambridge. Worst outage I've seen in 7 years of working in Kendall.

A Boston lawyer is suing Verizon over a monthly fee it imposed for the privilege of being able to make long-distance phone calls.

In a lawsuit filed yesterday in US District Court, Brian Lenfest says the company should reimburse him and all other businesspeople it charged for the $10 "monthly minimum charge for long distance."

Lenfest says that while his statements say that in months when he makes long-distance phone calls, the
cost of the calls would be deducted from the charge, in fact:

In a lawsuit originally filed last month in state court but transferred this week to US District Court in Boston, the Massachusetts Systems Contractors Association charges:

Ed. note: Post updated to clarify that the ruling was only on the poles between 2005 and 2009.

The Massachusetts Appeals Court ruled today that Verizon does not owe Boston $5.3 million in back taxes on its poles and wires over a four-year period.

The court said 150 years of telephone-related legislation in Massachusetts has consistently excluded overhead wiring along public ways from the personal-property tax - even as legislators have let cities and towns tax wiring that snakes under public ways.

The question became moot for future years in 2010, when the law was changed, city officials say.