The plethora of current water ecology issues have significant effects on the world population, but the sheer number and range of topics make it difficult for individuals to separate the facts and take action. The Water & Resiliency EcoForum on August 11th will feature five environmental activists, policy makers, and water conservation professionals, who will share valuable information for individuals looking to take action.

The Globe reports water's bubbling up near where water erupted into a full-blown torrent this past spring.

Water-main break makes a mess of traffic around Ruggles

A burst main at Tremont and Ruggles streets this morning meant gushing water and diverted traffic on those streets and Melnea Cass Boulevard.

So we lost our water supply because of a Depend-O-Lok clamp?

That'll teach us to rely on Vogon engineering.

The Globe reports on the search for the giant steel collar that blew off the aqueduct - and that the water flowing through backup aqueducts from long dormant emergency reservoirs turned out to be safe after all (just we couldn't know that for sure until Monday).

A city with a real water emergency

Not to belittle what happened this past weekend, but after reading what's going on in Nashville (here and here), you realize we didn't have it all that bad.

She brushed her teeth with a bottle of jack

... The Verdict: I smell like a scratch'n'sniff public service announcement, but my teeth feel clean and glossy. ...

Ladies and gentlemen: Start your taps!

Ban lifted at 3 a.m. But officials say: Let your cold water run for a minute and your hot water run for 15 minutes (if you have a 40-gallon water heater) or 30 minutes (80 gallons) before drinking deeply of the local tap water.

From the governor's office:

Once again, we are a disaster

Pres. Obama signs a federal disaster declaration for cities and towns served by the MWRA:

Specifically, FEMA is authorized to identify, mobilize, and provide at its discretion, equipment and resources necessary to alleviate the impacts of the emergency.

No word when we get our trailers.

From the folks manning the Twitter and Universal Hub Aquapocalypse desks:

Cambridge: Pretty much every single place that normally serves coffee, because they're special.

Longwood Medical Area: All the hospitals have their own water supply, so everything should be running. Au Naturals at Brigham and Women's for example.

North End: Boston Common on Salem Street. All out, but will have more Tuesday morning.

Roslindale: Select Cafe, Roslindale Square (across from the train station).

Roxbury: Peet's at Northeastern International Village, 1175 Tremont. No espresso, though.

Across the area: Au Bon Pain shops have coffee; except the one at the Pru.

So says the MWRA updates page (yes, refresh it).

The 120” pipe connection has been repaired, pressurized and put back into service. Fully treated water has been distributed to the MWRA system since about 6 PM on Sunday and is expected to continue. Water pressure in MWRA service area is in typical ranges.

Please remember that a Boil Water Order is in effect for the following communities until otherwise notified and water use should be restricted to essential use only.

Jane Kokernak puts together a video showing us how to disinfect dishes and pots with some bleach.

Supply and demand or price gouging? 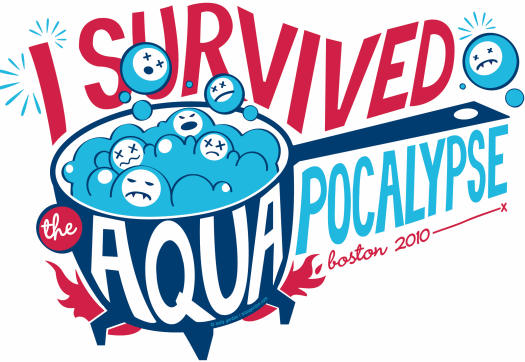 Designer Holly Gordon came up with this nifty aquapocalyptic design. You can get it on a T-shirt, a mug or a mousepad.

But, of course, you also want Aquapocalypse water bottles.

All Boston Public Schools will be open as usual. We will have bottled water in the schools and we will have pre-packaged meals for breakfast and lunch.

There's no sadder sight for a Dunk's coffee drinker: Empty pots. Seen at the Dunkin' Donuts on Hyde Park Avenue in Hyde Park this afternoon.

Yes, of course you can now buy a T-shirt. Proceeds go to the Kidlet College Fund.

The kids are alright

Boston University reports it's secured a supply of 34,000 bottles of water to quench student thirst and several tons of a ice a day (to cool boiled water). And, the school has figured out how to have coffee available to students during final exams.

Ross Levanto photographs an explanation of the issue posted at a White Hen Pantry on Cambridge Street (click on the photo for a larger view).