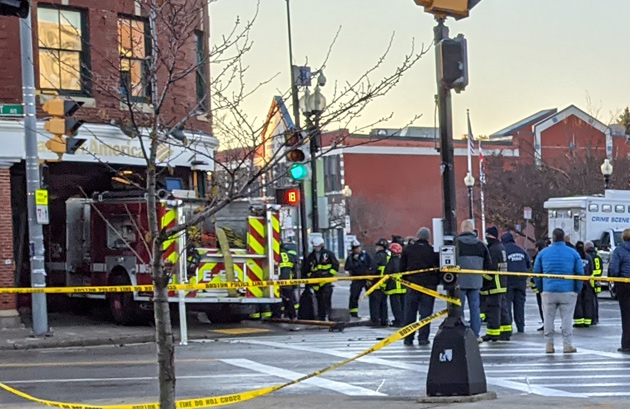 Engine 52 in Bank of America. Photo by Aaron Zaubi.

A fire crew responding to a fire at Charlie's House of Pizza, 1740 Dorchester Ave., crashed into a car and then the Bank of America in Codman Square early this morning. Read more.

A manager at the Bank of America on Federal Street faces federal wire-fraud and money-laundering charges for the way he allegedly embezzled hundreds of thousands of dollars from an investment firm with two dozen accounts at the bank. Read more.

Revere bank robber tried to bribe T bus driver to drive him to Dorchester, but she said no, feds say

After making off with more than $13,000 from a Bell Circle bank in August, a man up from New York hopped on a T bus. Being a New Yorker, of course, he didn't have a CharlieCard, so he offered to pay the driver with one of the $100 bills he'd just gotten, according to federal officials. And when that didn't work, he offered her $500 for a little side trip down to Dorchester, they allege. Read more.

The FBI's Bank Robbery Task Force reports this happy man held up the Bank of America branch at 333 Longwood Ave. in the Longwood Medical Area, around 1:40 p.m. on July 31. Read more.

A senior vice president at Bank of America, her husband and a Boston woman were indicted today on charges they figured out how to steal $2.7 million from the bank through transactions with non-profit groups in Boston and Atlanta, the US Attorney's office reports. Read more.

The FBI's Bank Robbery Task Force has released a photo of the man they say tried to hold up the Bank of America branch at 29 Corinth St. in Roslindale Square the afternoon of May 27.

If he looks familiar, contact the task force at 617-742-5533. And while you're at it, ask about the Mass Most Wanted TIP Program - there could be a reward in it for you.

Arthur Samuels, who once ran Bank of America's Fields Corner branch, was sentenced to a year and a day in federal prison and ordered to pay $2.2 million in restitution for his role in Michael David Scott's scheme to suck money out of banks with fraudulent real-estate purchases in 2007 and 2008, the US Attorney's office in Boston reports. Read more.

Around 1:30 p.m. in the Bank of America parking lot, 1440 Dorchester Ave., by a black man with a long gun and wearing a bright red jacket, who rode away on a black bicycle.

A man apparently too busy to don a mask held up the Bank of America branch at 1440 Dorchester Ave. around 1:35 p.m. on Monday, the FBI's Bank Robbery Task Force reports.

Stay out of the ATM near the Landmark Center Best Buy

Holloway McCandless reports on an incident around 8:40 p.m.:

Warning to BofA ATM users near Best Buy Landmark--card opens door to get in, but exit lever is broken. Rescued by passer-by.

Police are looking for a light-skinned Hispanic man in his 40s for a holdup at the Bank of America branch, 29 Corinth St., around 1:45 p.m. The man was about 6' and wore what appeared to be prescription glasses and a gray sweatshirt. He fled on foot.

Rapping Bank of America in Dorchester and Hyde Park

Thank God: Boylston Street to get another bank!

The Boston Business Journal reports the welcome news that the former FAO Schwarz space is going to become a Bank of America branch, bringing relief to long suffering residents and workers on the South Endish side of Boylston who will no longer have to go an entire block down and across the street to bank with Bank of America.

The Boston Business Journal reports that Secretary of State Bill Galvin will ask for legislation requiring state agencies to withdraw all their money from banks that continue to try to find new ways to charge residents for access to their own money, such, as oh, Bank of America.

On march through Downtown Crossing. Photo by Jeff Tamagini. More.

The Suffolk County District Attorney's office today dropped misdemeanor trespassing charges against 24 people who tried to stage a sit-in at Bank of America's Massachusetts headquarters as a protest against its lending and foreclosure policies on Friday.

"The Commonwealth makes this recommendation based on the peaceful nature of the protest and the non-confrontational manner of their interactions with police," Assistant District Attorney Susan Terrey said in Boston Municipal Court today.

24 arrested at Bank of America protest

BPD Supt. William Evans made one of the first arrests.

The protesters were taken away from the bank's Federal Street building when they attempted a sit-in as a protest against the bank's lending and foreclosure policies.

The six who I saw arrested at the bank's front entrance went peacefully when police asked them to stand and hag plastic restraints put on. The six had taken up position in groups of two at the doors. Boston Police Superintendent William Evans made the first arrest.

Some 1,500 people participated in the protest, organizers of Take Back Boston say.

Dewey Square takeover might be the smaller protest on Friday: Bank of America targeted for afternoon sit-in

As the Occupy Boston forces gear up to occupy the space in front of South Station on Friday, participants in another protest will be marching around the Financial District - before settling down for a sit-in at Bank of America's Massachusetts headquarters on Federal Street.

Malden Patch reports foreclosure protesters gathered up trash from a foreclosed Malden house they say Bank of America has let go to hell, then took it over to the Beacon Hill home of the president of the bank's Massachusetts division and dumped it there.