Police: 14-year-old already on GPS was tooling around Washington-Beech in Roslindale with a loaded gun in his underwear

Person shot in Washington-Beech in Roslindale 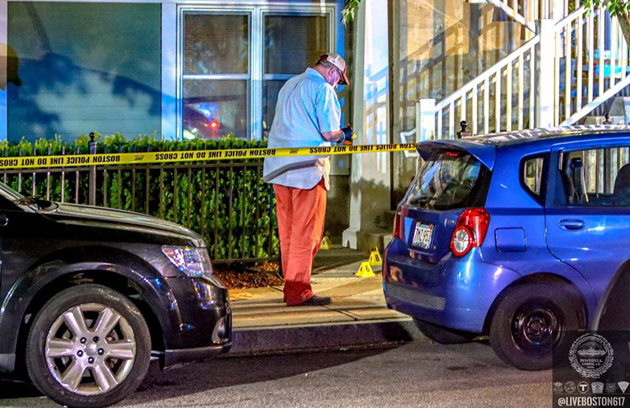 Around 10 p.m. Found on Mercedes View, the street that runs behind the large apartment building at the corner of Washington and Beech streets.

A shell casing was found at Mercedes View and Beram Street. Nearby residents reported hearing as many as three shots.

Boston Police report arresting two Roslindale men on gun charges Saturday night after finding one with a loaded gun in his hoodie and the other sitting in a car with a loaded gun under his seat - and finding a third gun in front of the car. Read more.

The BRA updates us on the work at the Roslindale housing project.

A tree dies in Roslindale When the city released plans for the new Washington-Beech project, the renderings showed builders would keep a huge tree right at the corner of Washington and Beech streets. And, for a while, it looked like that really was the plan - workers even surrounded it with a protective wooden "hula skirt." But for some reason, they tore down the tree today and carted away its remains.

This is what the neighborhood was promised: Wicked Local Roslindale posts a photo. The project is being replaced with a series of townhouses and a single apartment building.

The Globe reports Boston will spend $33 million in federal stimulus funds for the Washington-Beech renovation project, which due to begin this spring anyway (the BHA had started moving people out last year as it gets ready to tear the whole place down and replace it with townhouses and a single large apartment building). So does this mean the city will spend the $33-million portion of the money it had already set aside for the project on something else? Daniel Mitchell, 7, a second-grader at the Bates School, shows Gov. Patrick and Mayor Menino where his apartment is.

Gov. Patrick came to the Washington-Beech housing project in Roslindale today to sign legislation that will result in the 1952 project replaced by a series of low- and moderate-income townhomes and apartments by 2012.

Trinity Boston, a private developer, will replace the current dormitory-style buildings on the 7.6-acre project with townhomes and a 72-unit apartment building at the corner of Washington and Beech streets, which will mainly house elderly residents. The project will cost $90 million; earlier this year the Boston Housing Authority won a $20-million federal grant to help pay for the work. Artist's rendering of the new Washington-Beech. You're looking south on Washington, past Beech.

Amos pleaded innocent at his arraignment, was ordered held without bail until a dangerousness hearing on Friday, according to the Middlesex County DA's office.

The Transcript reports Amos was arrested on a cocaine-possession charge on Beechland Street last October.

Seems there's a rumor going around Dedham that when Roslindale's Washington-Beech housing project is torn down for renovations, the tenants would be moved en masse to that fair town, and you know what that means.

Didn't seem logical to me (why would Boston residents be forced to move to another town, wouldn't they then stop being Boston residents?), but I asked Lydia Agro, communications director for the Boston Housing Authority, which is coordinating the $100-million rehab. Her basic answer: No. Her longer answer follows:

The Roslindale Transcript reports Boston police looking at the connections between the occupants of a unit at 65 Beechland St. and a spate of gang-related violence that has left nearby residents increasingly fearful.

The paper reports the occupants moved out of the apartment this week rather than wait for the Boston Housing Authority to evict them after a search of their apartment following Tuesday's double shooting on Beechland found drugs and a semi-automatic weapon. Three people were taken into custody following the Tuesday-afternoon shootings; however, no one has been charged yet.

The paper quotes a local police captain as saying the occupants also have connections both to January's triple shooting (in which one man died), following the funeral of a Dorchester gang member.

Unclear from the article is the remaining shooting. An alleged gangbanger from Dorchester and his 12-year-old brother were shot in January on Cornell Street.

In addition to these incidents, police report confiscating drugs and weapons at the project in recent weeks (as well as at the Cornell Street home).

Police have said gang members began showing up in Roslindale when the BHA moved tenants out of Dorchester's Franklin Hill complex for renovations.

Connect the dots: See if you can figure out the location of the Washington-Beech project on this map.

The Boston Housing Authority has won a $20 million grant to tear down the Washington-Beech project and turn it into a mixed-income townhouse neighborhood.

Under the grant, the BHA will replace the existing 266-unit series of apartment buildings with townhouses: 139 public-housing units and 126 affordable rental units. The redevelopment plan also includes money for 71 affordable homes for purchase. The BHA will pay for relocation of residents to other projects or Section 8 rental units during construction.

The grant is good news for nearby residents, who have watched the project become a center of gang-related violent and gun crime in recent months. Police blame this on an influx of new residents from Dorchester's Franklin Hill project, itself a violence-ridden complex that is nearing the end of its own reconstruction.

An ambush shooting at Metropolitan Avenue and Poplar Street around 1:16 p.m. today left one dead and two local schools locked down.

Boston Police report three young men, 17-23, were in a limo with a driver when their car was raked with gunfire. The driver, unhurt, then took off toward Washington Street, coming to a stop at Beech and Beram streets, in front of the Bates school.

The Bates was locked down for 30 minutes, as was the Conley Elementary School on Poplar Street, a couple of blocks from the shooting scene.

A year ago, two teenagers were shot around the corner from the Bates at Washington and Beech.

Ed. arrgh note: That hits a little too close to home. The kidlet's bus stop is at Metropolitan and Poplar (and she plays sometimes at the Conley playground); I drive by the Bates on the way to work.