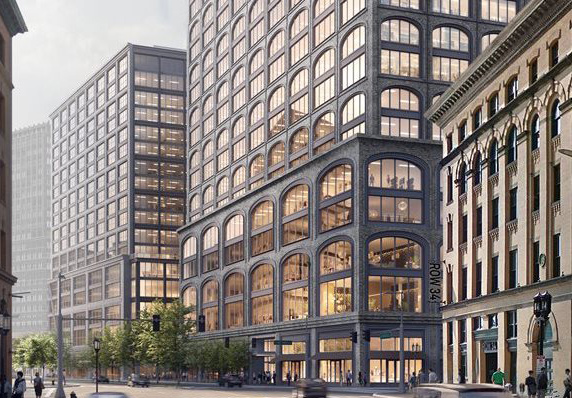 The developer of the massive Seaport Square project is seeking BPDA approval to shift an as-yet unbuilt building on Congress Street from residential to office and R&D space and to replace many of the large luxury units it had originally planned on other parcels with "smaller, lower-priced units." Read more.

Maple syrup made from Seaport trees? Developer shows off plans for 1.5-acre park 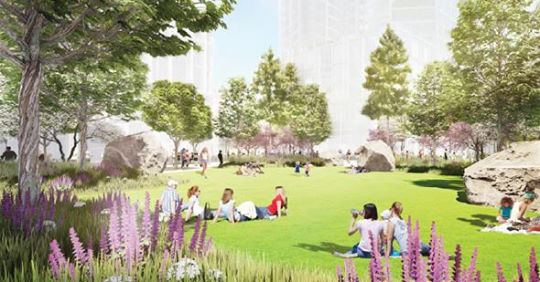 WS Development goes before the Boston Civic Design Commission tomorrow to show off the plans for the 1.5-acre park it's planning for the heart of its large Seaport Square development, in a new neighborhood that currently has little in the way of public amenities. Read more.

Angling for Amazon on the South Boston Waterfront 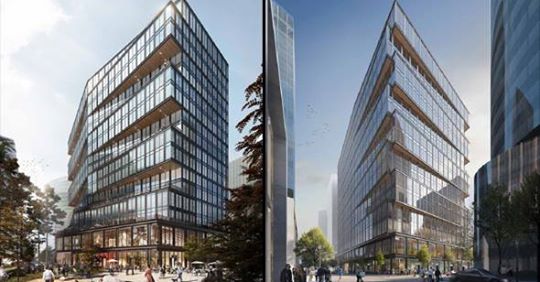 Angular rendering by Gensler (hard to see, but, yes, requisite flock of birds are in both images).

The developers of the Seaport Square project released renderings of what Amazon's proposed 17-story building would look like at last night's meeting of the Boston Civic Design Commission. Read more.

Instead of a park, South Boston Waterfront to get a walkway

The Globe reports the new owners of the massive Seaport Square land have Xed out longstanding plans for a park in the middle of the property and will instead give the BPDA plans for a walkway from Summer Street to the water that will be "narrower but longer, and friendlier to foot traffic."

From the current plans on file with the BPDA: Read more.

Cranes get no rest: Construction set for next year on next, $700-million phase of Seaport development

The Boston Business Journal talks to developer John Hynes about the three-building, 750-unit Seaport Square complex on which work is set to begin in mid-2016.

When you're mayor, you get to play with the best toys. Photo by the mayor's office.

Work officially began yesterday on the $600-million One Seaport Square project off Northern Avenue in South Boston, which will feature more than 800 residential units in two 22-story buildings, a luxury movie theater, a luxury bowling alley and a luxury health club, as well as space for additional luxury shops and restaurants.

The Boston Business Journal reports that owners of the Barking Crab won't go silently into that good night: They've submitted plans to replace their shack with a six-story building that could complicate plans for the gazillion-dollr Seaport Square project all around the restaurant.

The developers of that project had proposed their own six-story building basically right atop the Krusty Krab Fort Point Channel establishment - and offered space in it to the Barking Crab.

John Keith offers some grudging admiration for the shellfish behavior:

Gale International did all the "dirty" work, hosting at least six community meetings, modified all its plans, got everyone on board (including the BRA) and now the BC wants to come in and just build? Well, wouldn't you?

John Keith posts an aerial view and a couple of maps of the 23-acre Seaport Square project next to and around the federal courthouse.

John Keith reports on a neighborhood meeting last night on the 6.5-million square foot Seaport Square project near the federal courthouse: I'm thinking he and Vivien Li of the Boston Harbor Association won't be sitting down for coffee anytime soon.