James Michael Curley reminds you that while it's now spring, it's still cold out there 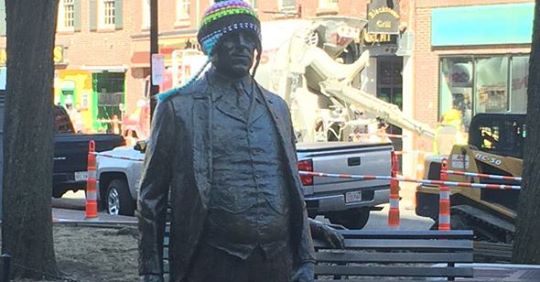 Inside the Curley house. From the Boston City Archives collection of photos of the house.

James Michael Curley's old place on the Jamaicaway, which has mostly sat unused for decades, will get new life under a plan by the Emerald Necklace Conservancy to re-open it for regular historical and cultural events. Read more.

What do you do with 1,000 photos of James Michael Curley? 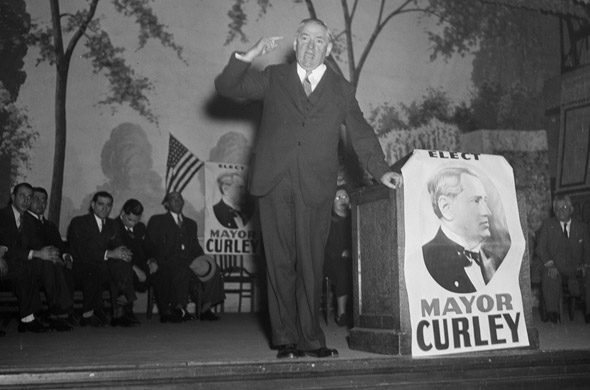 The Jamaica Plain Historical Society recently purchased some 1,000 negatives chronicling the life of James Michael Curley between 1934 and his death in 1958. They turned them into photos, digitized them all and posted them on Digital Commonwealth. 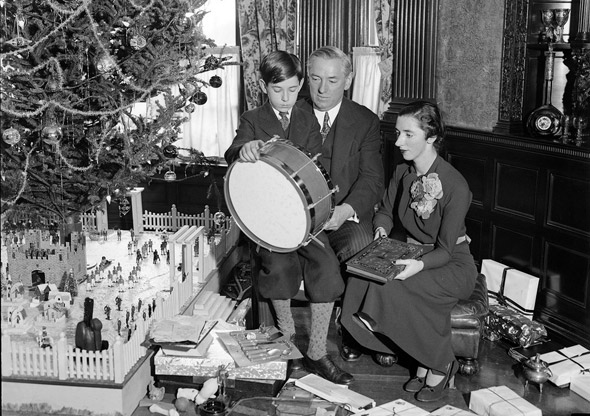 A somewhat tragic figure, his father wanted him to be a pol; he wanted to be a Jesuit.

From the BPL's Leslie Jones collection. Posted under this Creative Commons license.

James Michael shows off his playful side 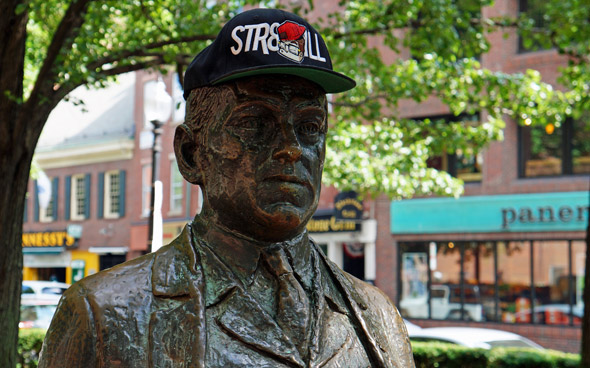 Somebody outfitted the standing James Michael Curley statue with a new cap this morning.

Merry Christmas from the Curleys

From the BPL's James Michael Curley collection. Posted under this Creative Commons license.

The Jamaica Plain Gazette reports on a class project at Wentworth to scan in photos of both the exterior and interior of James Michael Curley's house at 350 Jamaicaway - which is owned by the city but which is almost never opened to the public.

The Boston Licensing Board decides tomorrow whether to let Diarmuid O'Neill buy the West Roxbury Pub on Centre Street and turn it into a new restaurant and pub called Eat with Jack O'Neill.

At a hearing today, the proposed $250,000 purchase got the approval of city officials and West Roxbury neighborhood and business groups. O'Neill, who owns the Squealing Pig in Brigham Circle, said he plans to add a small bakery and wants to start offering Sunday brunch.

Never get into a staring contest with Mayor Curley

The Boston Public Library has posted a ton of photos by Leslie Jones of James Michael Curley as mayor and governor, including this one of him sitting at his fabled desk at what is now Old City Hall in 1933. City Hall panjandrums have long wondered what happened to that desk.

Other photos show him posing with people such as Honey Fitz, Johnny Kelly, FDR, Father Coughlin, Aimee Semple McPherson, General Pershing and Richard Byrd. He's captured fishing in Jamaica Pond, throwing out the first ball at both Fenway Park and Braves Field, posing as an Indian chief, holding a snowshoe, being inaugurated as governor, visiting the Brockton Fair. His car is shown after two crashes. There's a picture of his son Francis with his pet monkey (and, of course, the photo of Curley with a hat-wearing zebra).

When the mayor packed heat:

James Michael Curley with a zebra wearing a hat

Over in Allston/Brighton, Marcie Laden is advertising responsible, carbon-neutral snow removal, in other words, her daughters with snow shovels.

Contrast that with Mayor Curley's 1948 letter to MIT (found by BostonTweet), asking for the Institute's help in coming up with a way to use flame throwers or chemicals to shrink snow accumulations.

The dining room of the West Roxbury Pub and Restaurant is a paean to the life of James Michael Curley, from boyhood through old age - a Curley mural fills all four walls of the room (local residents paid $20 to have their faces immortalized behind and next to Curley).