Terror ride on the Red Line as man attacks other passengers with fists, feet and a metal bottle, police say

Transit Police report arresting a Dorchester man on charges he turned an afternoon Red Line ride from Ashmont to JFK/UMass into ride for hell for other passengers, at least four of whom they say he punched, kicked and chucked a metal bottle at them. Read more.

Transit Police report arresting a 14-year-old and a 16-year-old on charges related to an incident last night at the JFK/UMass Red Line stop. Read more.

Another set of stairs at JFK/UMass shut as unsafe

The Dorchester Reporter explains why another set of stairs at the JFK/UMass Red Line and commuter-rail station is shut.

Man smashed in the face on the Red Line at JFK/UMass; suspect arrested

Transit Police report arresting a Dorchester man they say repeatedly hit another man in the face with some sort of blunt object on a Red Line train Friday night. Read more.

DA: Nobody to blame criminally for professor's death at stairs outside JFK/UMass T stop

E-mails show bureaucratic inertia, finger pointing might be to blame for missing steps man fell through at JFK/UMass

Braintree riders might want to pass; there's a dead train at JFK/UMass

The MBTA reports delays of up to 15 minutes on the Braintree branch of the Red Line due to a deceased train. One rider reports from the train it didn't quite make it into JFK/UMass:

We're across from the Globe building just sitting here. 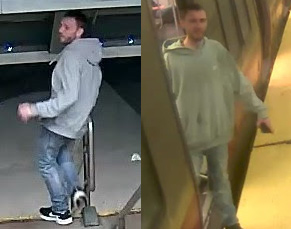 Transit Police have released photos of a man they say grew angry that Braintree train wasn't leaving JFK/UMass when he wanted it to, so he punched an MBTA worker in the face, around 1:10 a.m. on Oct. 17.

A bit late: State removes the stairs at JFK/UMass that a BU professor plunged to his death through

The Dorchester Reporter reports state workers this weekend removed the stairs with the large gap next to the JFK/UMass T stop, a week after a BU professor died there.

David Jones, an associate professor at the Boston University School of Public Health, died Saturday afternoon when he fell through a rickety set of stairs between the JFK/UMass T station and Old Colony Avenue. Read more.

Person falls on tracks at JFK/UMass 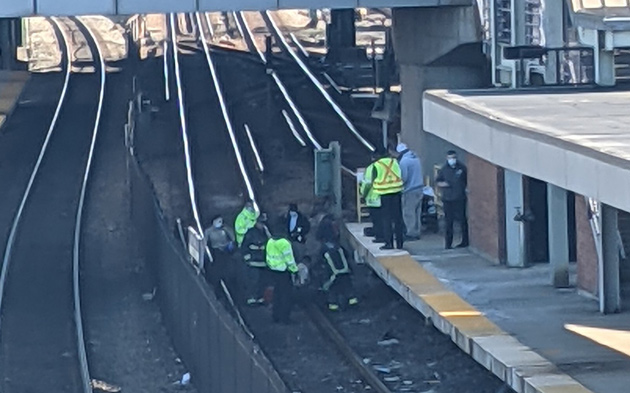 John Smith captured T workers, firefighters and EMTs getting a person off the Red Line tracks at JFK/UMass this afternoon.

The T halted Red Line service around 5 p.m. to allow the person's rescue; service has since resumed.

Man wanted for kicking, spitting at woman at JFK/UMass T stop may have also attacked an Uber driver downtown 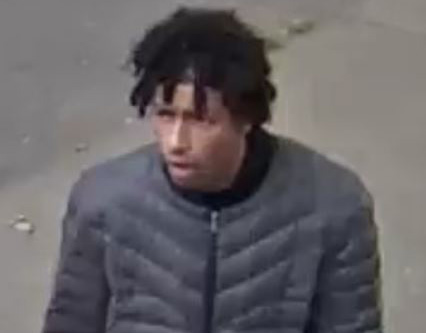 A man Transit Police say attacked a woman he was piggybacking behind at the JFK/UMass Red Line stop last Tuesday also punched an Uber driver on Arch Street on Friday afternoon, according to the driver's passenger at the time. Read more.

The Red Line and commuter-rail service came to a halt on either side of JFK/UMass shortly after 10 p.m. after a man jumped on the Red Line tracks, ran down them a bit and then jumped off. He didn't start the night as a Red Line track runner but as a simple motorist, except he apparently crashed into a parked car, then ran away and seemed to figure the best escape route might be on the subway tracks. Read more.

The little Red Line train that couldn't; was supposed to go downtown, but wouldn't

The MBTA is reporting Red Line delays up to 15 minutes due to a balky train inbound near JFK/UMass. John Lyons reports he was on the dead train for 20 minutes with nary an announcement what was going on.

Not to give the MBTA any sass, but things went wrong at JFK/UMass

That Red Line derailment caused by an old axle snapping

The State House News Service reports the T has figured out that the June derailment that caused problems for months started when a27-year-old axle on one car simply had enough and snapped, sending cars into those switching cabanas.

The MBTA has released video of the June 11 Red Line derailment at JFK/UMass. WBUR has a copy. 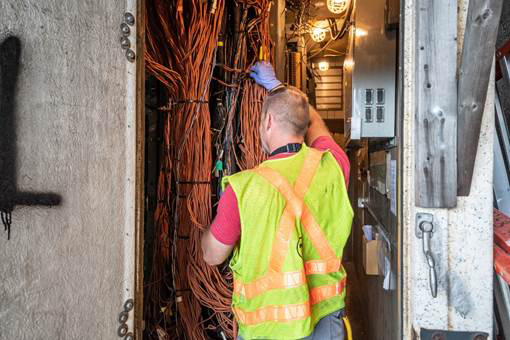 Working on the wires at JFK/UMass. Photo by MBTA.

With repairs to the destroyed JFK/UMass signal bungalows continuing apace, the MBTA announced today it hopes to restore fully automated signaling between JFK/UMass and Broadway by Aug. 15, which should cut five minutes off the longer Red Line commutes. Read more.

WBZ reports on the incident last night. The sound made at least one person think somebody was firing a gun and told that to Transit Police, which sent cruisers rushing to the scene, but by the time they got there, the hammer guy was gone. 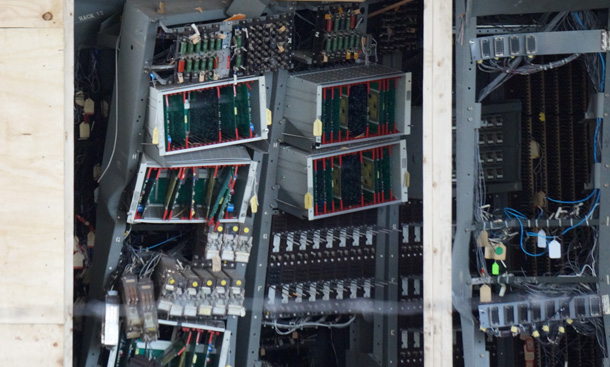 Damaged signal equipment at JFK/UMass a week ago.

The MBTA says that fully restoring the signaling equipment destroyed in the June 11 derailment at JFK/UMass will likely take until at least Labor Day, so that means riders will continue to need to allow extra time for their commutes. Read more.