C Line not so fleet; dead train at Washington Street

"Moderate" delays due to the froze-up trolley at Washington Street, the MBTA says.

MassDOT announced today that it's installing specialized traffic signal systems along Beacon Street in Brookline, and Comm. Ave. and Huntington Ave. in Boston that will switch to green lights for approaching trolleys. Mass. Ave. in Cambridge will get similar treatment for buses. Read more.

Transit Police report arresting a Canton man for "conducting himself in a lewd manner" on a C Line trolley as it approached Coolidge Corner around 9:30 p.m. yesterday.

NBC Boston reports a trolley derailed at the Cleveland Circle yard and Beacon Street around 7:20 a.m. No injuries, no effect on service.

Turkeys take on T and win - in Brookline, of course

Shortly before 5 p.m., as Katrina Demulling shows us, service halted on the C inbound due to a pair of turkeys that refused to yield the tracks to a trolley.

The T ran fine in the snow; it's today the trains won't go

The T says service was pretty durn good on the four subway lines thanks to all the investments in things like new third rails and plows and dispatch centers.

So far this morning, the T has reported Red Line problems that include dead trains at South Station and near Ashmont, signal and switch problems on the Braintree branch and at Park Street. Green Line trolleys ran even slower than usual on the C line.

Dead trolley at Hynes causing problems on B, C and D lines

Just "minor" delays on the Green Line so far, the T reports.

The MBTA reports "moderate" delays on the C and D lines due to signal issues at Kenmore Square. 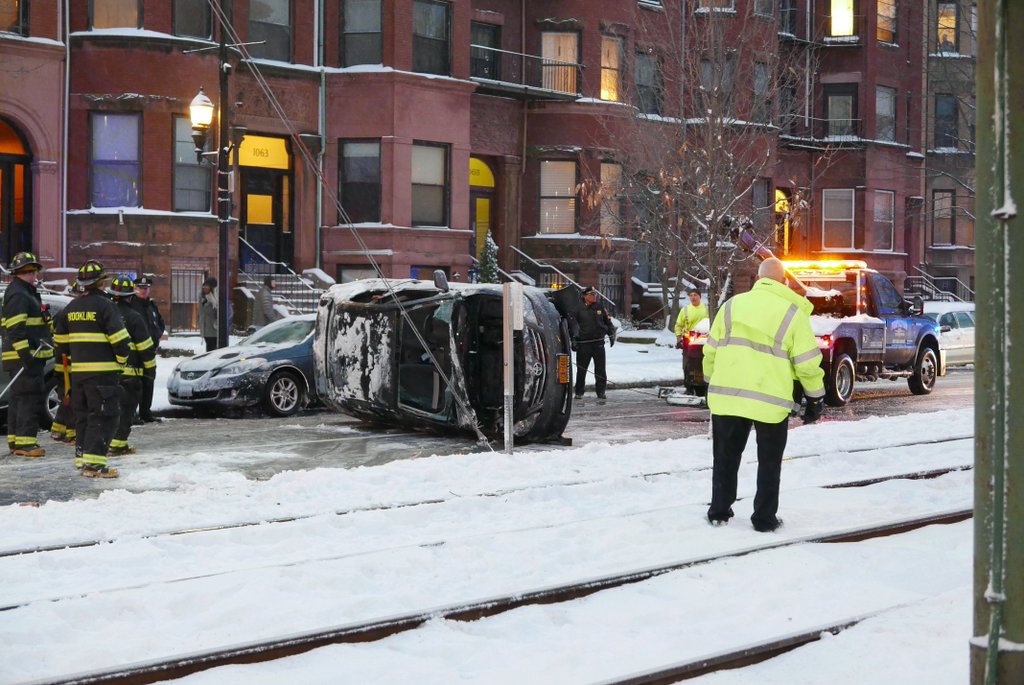 Shortly before 7 p.m., the driver of a car with New York plates rolled over on Beacon Street at Carlton in Brookline, shutting both the road and the Green Line, Nick Barber reports.

The view from inside the trolley. Photo by Vienne.

The crash happened around 11:45 a.m. at St. Mary Street. No service between Kenmore and Coolidge Corner as a result.

The T is reporting some ish on the C Line, where an inbound trolley eased into eternal slumber at Summit Avenue just a tad before 8 a.m.

Catherine N reported at 6:45 p.m. she was on a dead outbound C trolley in the tunnel between Kenmore and St. Mary. There was another fjord-pining trolley on the B line.

Well, the C Line now goes all the way to Cleveland Circle and the Orange Line to Wellington 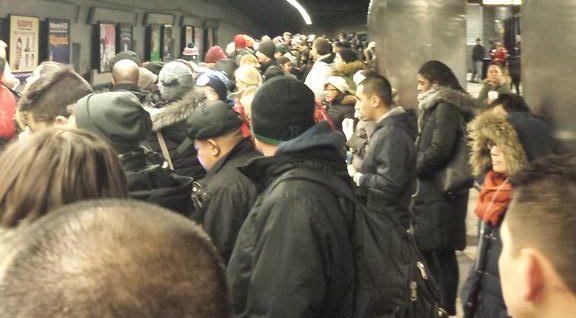 Aggro Maverick: No train for 20 minutes. Photo by Tim Lawrence.

But the B Line? Amanda McNeil reports:

Direct quote from 57 driver "All the buses leaving Watertown are full. Y'all better just start walking"

An Orange Line tried withered on the vine at Tufts.

Three inbound Red Line trains passed through Central after 8:30 a.m. and nobody could get on any of them.

Green Line plows itself out

David Parsons used slit-scan photography to take this unusual view of a Green Line trolley on Beacon Street in Brookline.

Around 9 p.m., the driver of a Golden Temple delivery vehicle proved unable to gau around a trolley in Washington Square, Brookline. The two vehicles were still there 30 minutes later when Joe Ranft arrived on scene. Rachel Chernick reports:

Driver side bashed up but seems fine.

Naturally, the collision brought C Line service to a halt, but T inspectors used their noodles and ordered up substitute bus service along Beacon Street.

The Red Line and the Green Line (C in particular) have had better mornings, as have their riders.

And speaking of the Green Line, at 11, some folks will see if they can outrun the Green Line between BC and Blandford Street. Watch them live.

C and D trolley service back to normal

Now the T tries to figure out what caused a trolley to derail in the tunnel between Kenmore and Fenway yesterday.

Death pointed a bony finger at an inbound Red Line train at Charles/MGH shortly before 4 p.m. A trolley on the C Line departed this mortal coil before it could get to Cleveland Circle.

The C Line had delays due to flamethrower

Ari Ofsevit watched as a T worker used a flamethrower to thaw out some track in Coolidge Corner around 8 a.m.

The T ran trolleys all night to keep the tracks clear; but that didn't help much on the B and D lines, which experienced major delays this morning due to trains that died.