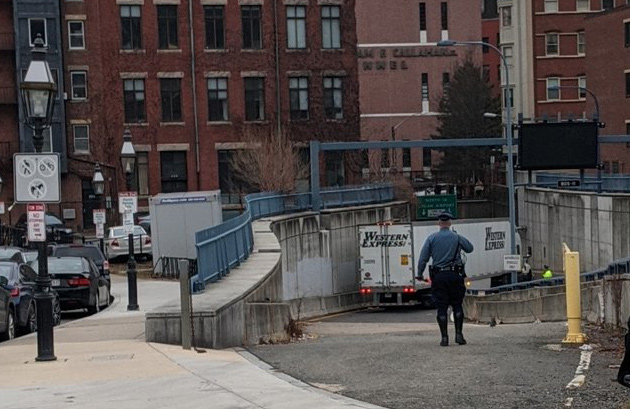 Finn witnessed one of the rarest of Boston sights this afternoon: Somebody actually using the normally blocked ramp down from North and Cross streets down to the Callahan Tunnel, across from the old Tunnel Administration building. Read more.

Callahanned just doesn't look right, so let's say a backhoe got storrowed at the entrance to the Callahan 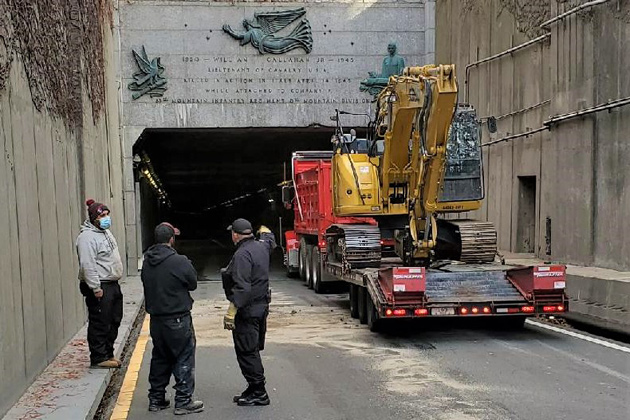 State Police report the Callahan Tunnel remained shut even after a crew unwedged the backhoe whose trailer driver managed to get it stuck at the entrance so an engineer can make sure the cramming and jamming didn't damage the tunnel. Read more.

There'll always be a Boston: Truck driver near-storrows at entrance to the Callahan 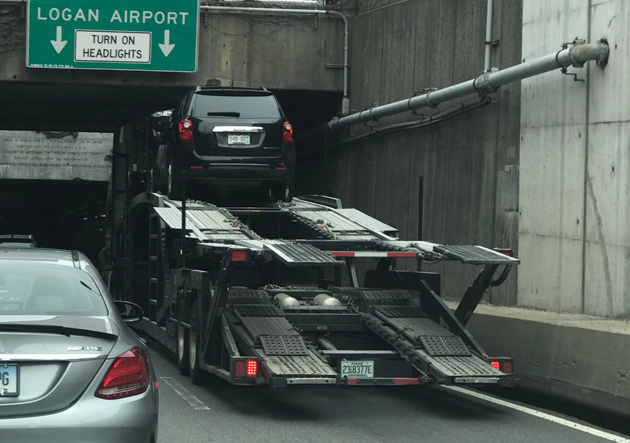 You think MassDOT should put signs up warning truck drivers to ensure proper social distancing between the tops of their vehicles and river-road bridges and tunnel entrances? Kathleen Ferry captured the scene at the entrance to the Callahan Tunnel early this afternoon:

Todd Buffum reports he was in the Callahan Tunnel shortly after 10 a.m. when a construction sign fell from the ceiling, "just 15 feet in front of our car."

Go figure: Trucks can storrow at the entrance to the Callahan Tunnel, too 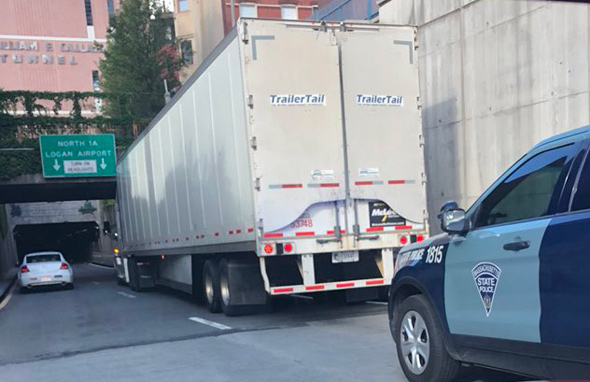 EastieStrong, who just wants to get home, reports both lanes into the Callahan are way backed up due to a tractor-trailer with a driver with good enough reflexes to avoid having his vehicle peeled back like a can of sardines - so chalk this up as a near storrowing.

Around 2 a.m., Liam Stapleton, 38, of Revere, drove into a work site in the Callahan Tunnel, causing damage to equipment, but, unlike in similar recent crashes, no injuries, the Suffolk County District Attorney's office reports. Read more.

Around 5 a.m. on Sunday, WHDH reports.

NorthEndWaterfront.com reports on a meeting about the roar from the entrance to the Callahan Tunnel. Also, state officials agreed to cut through the bureaucratic morass that currently means sidewalks over the trench don't get shoveled after snowstorms.

Workers prepare to take top off a Longfellow shaker. Photo by MassDOT

State officials say the Callahan Tunnel should open round about 5 a.m. Monday morning, which will begin to restore karma to Boston traffic and eventually end those mysterious clumps of state troopers along Rte. 16.

However, late-night drivers can expect some delays elsewhere along I-93 for the rest of the week as MassDOT gets the mighty highway back into fighting form:

MassDOT has a site to explain the rehab work, which will be followed by 11 months of nighttime and off-hours work.

Callahan Tunnel to shut for three months of repairs, starting in January

And then after that, the tunnel, originally opened in 1961, will be shut every night between 11 p.m. and 5 a.m. for four to five more months, MassDOT reports:

Every aspect of the tunnel is in fair to poor condition, and the time has come to put the Callahan in shape to last another 50 years.

MassDOT tweets the tunnel will be closed from 9 p.m. Sunday through 5 a.m. Monday to allow inspectors to examine all the wall panels to make sure no more will simply fall off, like one did last night. The Globe reports the inspection is pretty basic: Workers will yank on every single panel; any that are loose will be replaced.

Ten current and former toll collectors at the Ted Williams and Callahan tunnels were charged today with stealing toll money from the Massachusetts Turnpike Authority, which owns the tunnels.

As vehicles pass through the tolls, the collector is supposed to hit a switch indicating the type of vehicle passing through and collect the appropriate fare. In most of these instances we've charged, toll collectors would classify some of the taxi cabs or other commercial vehicles as ordinary vehicles, but charge the drivers the higher toll rate and pocket the difference.

Another scheme involved toll collectors manipulating the timing switch used to count cars so that two vehicles would be counted as one. Again, the toll was collected from the uncounted vehicle but pocketed by the toll collector. The dollars stolen from the Turnpike by misclassifying or miscounting vehicles could range anywhere from $20 to $150 per toll collector, per shift, and amount to thousands of dollars.

State Police began their investigation last October. The ten were issued summons to appear in Boston Municipal Court to answer the charges.