Boston Parents Schoolyard News reviews what's going on with the move of the Boston Community Leadership Academy from the old Hyde Park High School to the McCormack Middle School: Even as BPS promotes its $1-billion "BuildBPS" vision of 21st-century almost suburban like high schools, the BCLA students say they are getting a building without enough classrooms, no auditorium, a smaller gym with no bleachers and maybe even not enough lockers. 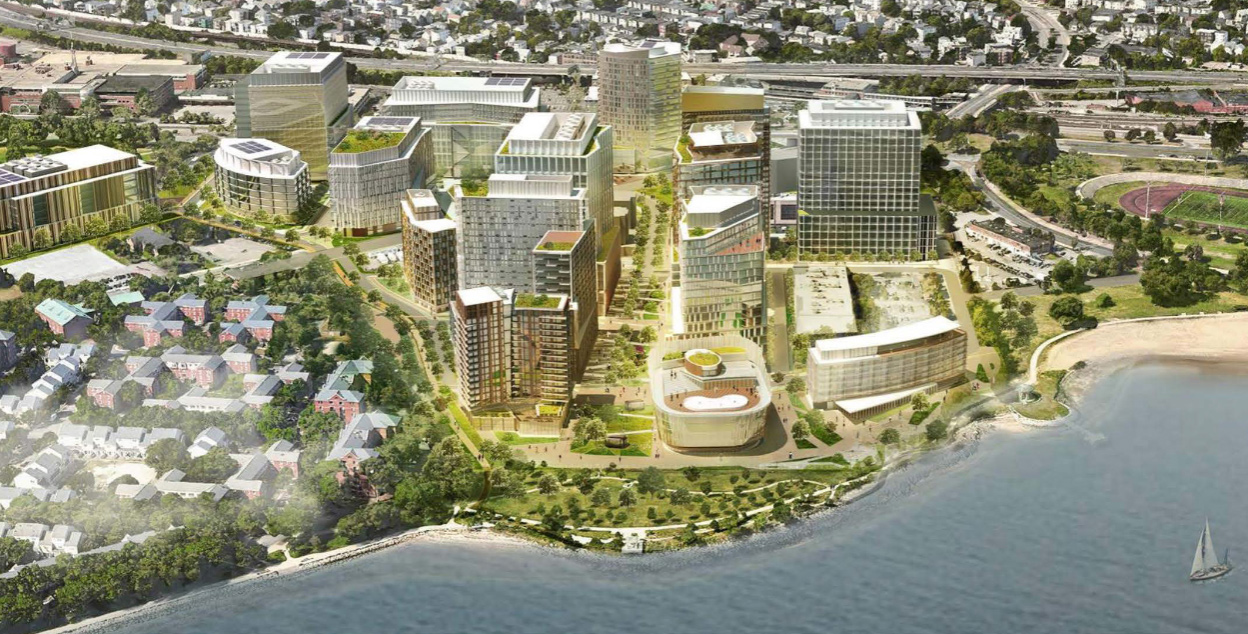 The Dorchester Reporter reports on ideas from eight developers for a ten-acre site on Columbia Point that includes the historic Calf Pasture sewage-pumping station.

The Boston School Committee narrowly voted last night to cede what is now a McCormack School field to a new Boys and Girls Club field house.

Boston Police report arresting seven men in an SUV and seizing a gun wrapped in a sock not long after several shots were fired into an apartment at 36 Harbor Point Blvd. last night. Read more.

The sewage castle of Columbia Point

Aline Kaplan introduces us to the history of the Calf Pasture pumping station on what is now the UMass Boston campus on Columbia Point: The pumping station was built in an era of ornateness for public buildings, even those whose function was to help pump raw sewage to Moon Island, where it would be released as the tide went out - on land that was originally used for grazing cows.

Boston Parents Schoolyard News reports McCormack School parents and others remain upset how the city decided to simply hand over a school field for the proposed new center without even talking to them first = and as the school morphs into a larger 7-12 school, and that they'll be bringing their concerns to school officials at a meeting at 5:30 p.m. today at the Dever School. A civil-rights lawyers group and a group representing Harbor Point residents are also objecting to the land transfer.

The Dorchester Reporter reports the Boys and Girls Clubs of Dorchester and the Martin Richard Foundation are planning a $30-million facility on what is now a field next to the McCormack School on Mt. Vernon Street.

The Dorchester Reporter reports the company leasing the old expo center from UMass Boston on Columbia Point to redevelop it has put down $110 million to buy Santander Bank's five buildings across Mt. Vernon Street, most notable for the large building with no windows.

WBUR reports on calls for ferry service between Downtown and Columbia Point in Dorchester.

The Dorchester Reporter reports the state has appointed BPS veteran Michael Contompasis as receiver of the Dever School on Columbia Point to try to turn around the low-ranking school.

Contompasis long served as headmaster at Boston Latin School before serving as superintendent and BPS COO. He retired, then went back to BLS as interim headmaster in 2016 after Headmaster Lynne Mooney Teta quit following the Black Lives Matter controversy there.

Usually we just have one mayor, but this week, we have hundreds, here for the US Conference of Mayors, and they'll be celebrating with a fireworks display from the water off the Kennedy Library, starting around 9:30 p.m. So get yourself to a Dorchester or South Boston beach or high point, or just get your dog's thunder blanket ready.

Schoolyard News brings us up to date on the tussling between City Hall - which wants to take a school yard now shared by kids at the Dever and McCormack schools and turn it over to some private group that could build its own recreational facility and improve public space there. Read more.

Yes, those were fireworks you heard

James Lau watched the fireworks being shot off near the JFK Library from his home in Quincy. Seems somebody rented out the library for an event tonight and figured, hey, why not shoot off fireworks for 20 minutes? Read more.

The Boston Fire Department reports firefighters rescued a woman who had somehow wound up in the water off the JFK Library around 11 p.m. on Tuesday. She was semi-conscious when brought up to shore and handed over to EMS for transportation to a local hospital. 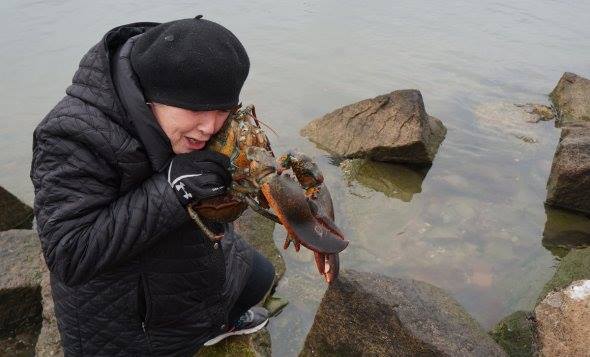 A farewell before Larry is released.

Ever since Roche Bros. in West Roxbury re-opened its seafood department before Valentine's Day, one lobster went unsold: The biggest of them all, a lobster so large the other lobsters crowded around the edges of the tank just to stay away from him, so large that shoppers would bring their kids over to see him.

The poor plight of the lobster began to bother some people over in Roslindale, who used a neighborhood Facebook group to begin to ponder doing something about Larry's fate - yes, of course they named him Larry. Read more.

Emmanuel Callwood, 34, was sentenced to 8 to 10 years in state prison today following his conviction on charges he stabbed a man in the lobby of the victim's apartment building,, then took his keys and dragged him up and down a hallway trying the keys to find his apartment, the Suffolk County District Attorney's office reports. Read more.

Before UMass, Harbor Point and the JFK Library, there was the Calf Pasture 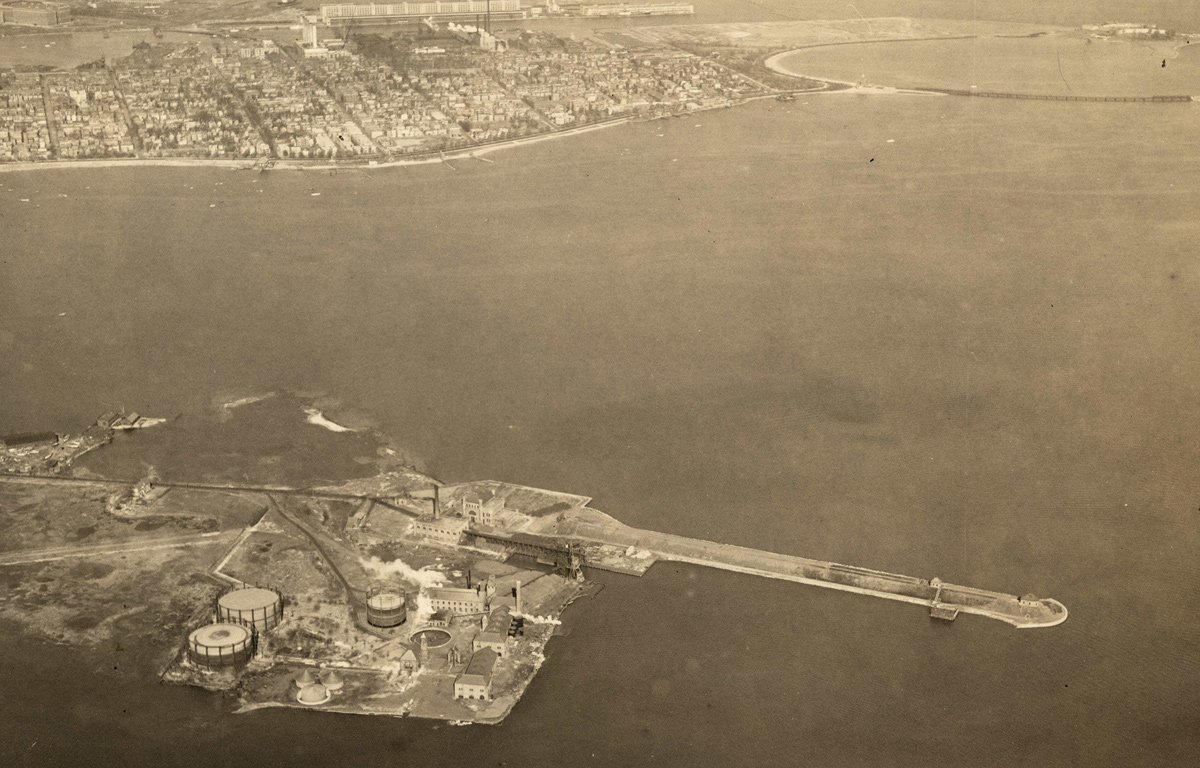 See it larger. Or even larger.

For sale: 20 acres of waterfront property

The Dorchester Reporter reports that UMass Boston is looking to sell the 20-acre site where the Bayside Expo Center used to be. UMass bought the land for expanding its campus but now hopes to use the money it'll earn from its sale just to shore up its existing buildings.