No more Macy's at CambridgeSide ex-Galleria

Rowdy teens do damage in Macy's; one arrested after pulling out a stun gun and Mace, police say

An elderly couple from Burlington is suing both Macy's and its escalator maintenance company for the serious injuries they say they suffered when the railing they were holding onto an up escalator suddenly jerked forward on Oct. 12, 2016 at the Burlington Mall Macy's. Read more. 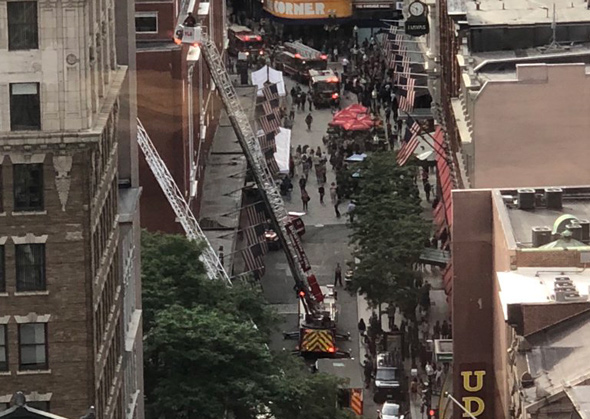 Firefighters responded to the eighth and seventh floors of 1 Summer Street in Downtown Crossing late this afternoon where rooms containing uninterruptible power supplies and large batteries at Markley Group's data center began filling with arc'ing and smoke and then water when the sprinklers went off. Read more.

Macy's sells Filene's shirts - but not in Downtown Crossing 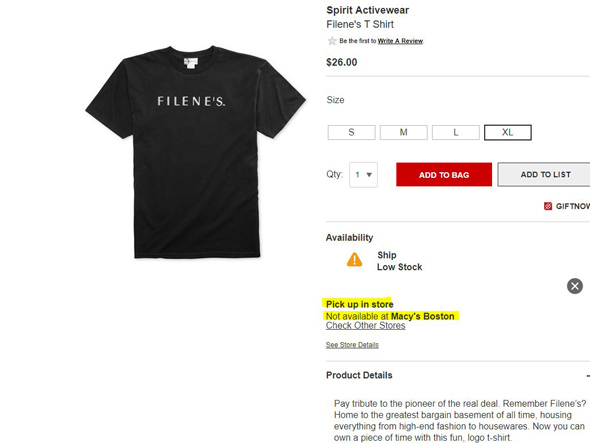 Cybah was browsing the Macy's online store, came across this item and wonders what's up with that.

Local sculptor is hopping mad at Macy's, so he sues 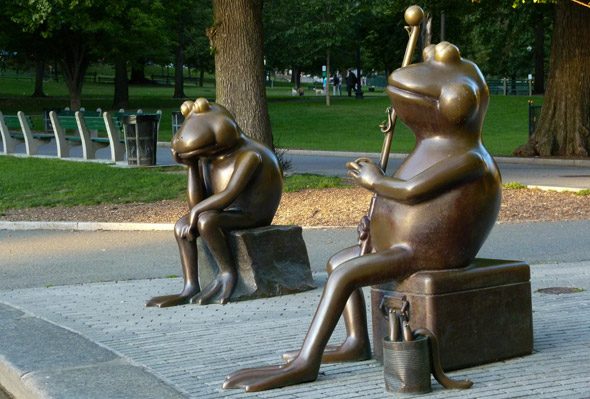 Photo by Christine Espino. Used under this Creative Commons license.

David Phillips, who sculpted six frog statues at Frog Pond, says Macy's violated his copyright when it used a replica of one of them in a Christmas display at its Downtown Crossing store.

In a ribbeting lawsuit filed last week in US District Court in Boston, Phillips, whose studio is in Medford, charges:

Braintree Police report on this guy who travels up here with "stolen credit card information skimmed onto other cards" with which he then buys Macy's gift cards, then heads back home to use the gift cards.

UPDATE: Judge Mark Hart Summerville set bail for the watch case at $500 and denied a request from the DA's office to revoke Quiles's release on personal recognizance in the open drug case.

A man allowed freedom after the drug evidence against him turned out to have been tested by ex-chemist Annie Dookhan was arrested yesterday on charges he and a pal stole 13 watches from the Downtown Crossing Macy's.

Transit Police report officers' attention was aroused when they spotted two guys acting all suspicious on a platform at the Chinatown Orange Line stop around 10:15 a.m. yesterday:

Boston Police report they are looking for a guy who allegedly tried to get three male teens at Macy's downtown into his car by telling them he was a police officer who would give them a ride home - after he'd followed them around "for a few hours."

Police say the man - In his late 20s or early 30s, 5'9" with a slim build, brown hair and blue eyes - approached the teens around 2:30 p.m. yesterday at the Downtown Crossing store:

According to the teens, the suspect stated, "I am a cop and I have a car upstairs. I'll give you a ride home." At this point, the teens asked the suspect to prove that he was a police officer by asking him to show them his badge. When the suspect refused, the teens say they fled the store.

Alex Kaufman tweets workers and customers have been sweltering since the air conditioning failed yesterday.

I think I went down a shirt size by the time I left. Felt like heat was on, def cooler outside.

Move over revivalists, the Mennonites are in town

Singing and preaching outside Macy's in Downtown Crossing.

Person hurt in battery explosion at Macy's in Downtown Crossing

Battery explodes around 8 a.m., victim gets himself to the hospital - by taking the Red Line. Nearby streets closed off.

Macy's has a lot of balls - Christmas balls

Alicia reports Macy's in Downtown Crossing is already decked out for Christmas; photographs a worker bring lots more balls up the escalator.

Macy's is a huge company. Surely, somebody in its IT department would know how to do a database select that excludes people with Massachusetts Zip codes when they send out an e-mail ad for this garish, hideous thing, this awful glass chunk that you can see after the jump. So the only conclusion one can reach upon learning that Macy's actually e-mailed an offer to residents of Massachusetts this morning to buy this, this thing is that Macy's hates New England (at least, past Stanford). Or as Pomsmith, who forwarded it, writes: "Filene's and Jordan's are turning in their graves."

OK, are you ready?

Steve Garfield explains why; starts with a phone call from "Mr. Johnson" in India.

When Macy's pulled the Pride mannequins from its Downtown Crossing store, Sandouri Dean Bey wrote the store to cancel his charge account in protest. He's just gotten a letter from Macy's that basically says homophobes are people, too:

... Unfortunately, while many people share your views about the content of the window display, many others do not. They too, are our customers. I hope you can appreciate our position on this subject, even though it may differ from your own. ...

What's a pregnant woman have to do to get some help in this joint?

The very pregnant Christonicle goes into the Macy's shoe department to get some shoes. A salesman gets her a pair, drops them at her feet, then leaves to go chat with co-workers.

Macy's East Chairman and CEO said that Macy's made a "mistake - unquestionably" when employees removed mannequins from the gay pride display at its downtown Boston location last week.

"Am I regretful that Macy's made a mis-step in this instance? Yes," Ron Klein writes. ...

At the Macy's mannequin protest

Jesse Kanson-Benanav photographs the protest over the pulled gay mannequins at the Downtown Crossing Macy's.

Earlier:
Protesting Macy's decision to can the gay mannequins.