Around 8 a.m. on July 12, 2007, Mr. Butch, the mayor of Allston, was driving his scooter down Brighton Avenue when hit a light pole. He was 56 and left a large community of people who knew him from his time on the streets of Allston and, before he was exiled after BU yuppified it, Kenmore Square.

Christopher Arthur took this picture of Mr. Butch - who graduated Berklee - and later turned it into a painting on the last suitcase he carried.

More photos and video at The Mr. Butch Show.

Photo of the procession.

Historygradguy posts tons of photos from the procession and service.

... I was particularly awed by the little girl wearing a Butch t-shirt and trying to convince her mother to go inside for the service itself. ...

Starting at 8 p.m. at the ICC Church in Allston. More details.

Until his ashes are ready to be scattered around Allston - and his family can make it to Allston.

One of the firefighters who worked on Mr. Butch says good-bye

We always noted that he never gave the Boston Fire Department any trouble and for that we will be eternally grateful. Godspeed! New Hobby took the photo of a street tribute to Mr. Butch. There will be a memorial procession for him on Monday, July 16, starting at 8 p.m. at Ritual Arts, 153 Harvard Ave. Update: The memorial planned for July 16 has been postponed.

Mr. Butch, the dreadlocked "King of Kenmore Square" and "Mayor of Allston," died this morning an hour after crashing his new Vespa motorbike near the Union Square fire station.

I am very sorry to report that Mr. Butch is dead. I have a confirmation.

There will be a memorial service Monday, July 16th beginning at 8pm. Meet at Ritual Arts.

He was transferred alive to B&W this morning with a broken neck and passed away about an hour later.

There will be an obit in the paper on Sunday.

I'm wicked late with the news, but seems Mr. Butch was arrested last month (after police watched him help a woman across the street, then take a sip from an open container of beer), then sent to Bridgewater, from which he might be released on the 25th.

Via The Mr. Butch Show.

Mr. Butch has a posse 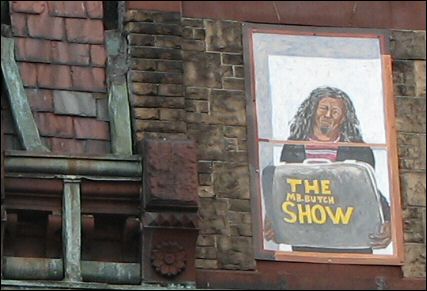 Ode to Mr. Butch on one of the windows in the Allston Hall Block building across from the Sports Depot.

Today, Mr. Butch discovers he has a Web site:

... Dude, you know I never want to bother a brother of the post office, but do you have a spare quarter so I can get some beverage. I have a website? Cool. No change, no problem, I will try somebody else. ...

Back in the day, Mr. Butch used to hold court as Mayor of Kenmore Square. Then we moved to the boonies (well, Roslindale) and lost track of him. And, of course, the square went yupscale; just wouldn't do to have him scaring off the Euroguests at the new hotel. Good to see he's still around, albeit in Allston.