Sandy Zamor Calixte, who has worked for the Suffolk County Sheriff's Department since 2006, announced today she is running for the top job in this fall's election. Read more.

WBUR takes us inside the Suffolk County jail building that might be used to house Methadone Mile residents who get involuntarily committed if they refuse to move on their own.

"It's more like a college dorm with a breakout room for programming and smaller rooms where people can have individualized counseling," and will have its own courtroom the sheriff says. But unlike a college dorm, occupants will not be able to leave.

UPDATE: One arrest made.

A guard at the South Bay House of Correction was in his car, arriving at work, this morning when he was beaten by several people on Atkinson Street, the Suffolk County Sheriff's Department reports. Read more. 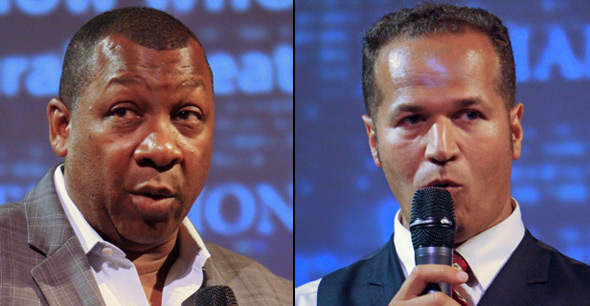 A corrections officer at the South Bay House of Corrections had bail set at $20,000 today at his arraignment on a charge of having sexual contact with a female inmate, the Suffolk County District Attorney's office reports. Read more.

Candidate for sheriff gets ticket for posting sign on public property

If you think you can guess which one, you'd be right.

Steve Tompkins registered as a Democrat on April 1, 2013

You know when you are heading for victory when anonymous posters attack and ridicule you. It always out of fear, hatred, and jealousy that these "stalker trolls" attack you when you are on the brink of success and triumph.

My good friend Moe Love obviously does not like the fact that yes I am a former Republican. However, fortunately I am in good company.

Doug the Bug's Voter Registration History and Other Lies

Gadfly candidate Doug "the Bug" Bennett recently claimed that his latest opponent, Suffolk County Sheriff Steve Tompkins, was formerly registered as a Republican. A quick review of Massachusetts voter records indicate that this is not true and that Sheriff Tompkins has, in fact, always been a registered Democrat. This deception was presumably propagated by Doug the Bug to deter the good Democratic voters of Boston from noting that Doug himself is a Republican who only occasionally registers as a "D" to jump into some race or another of which he's utterly unqualified to be involved.

You know when you are heading for victory when anonymous posters attack and ridicule you. It always out of fear, hatred, and jealousy that these "stalker trolls" attack you when you are on the brink of success and triumph.

My good friend Moe Love obviously does not like the fact that yes I am a former Republican. However, fortunately I am in good company.

My opponent Steve Tompkins, a Press Secretary, registered as a Democrat only this past April 1, 2013 according to the Boston Elections Department. Before that he was a Republican.

Steve Tompkins acts like animal, has mental meltdown, and loses control of himself at Revere Parade.

REVERE- At the Christopher Columbus Day Parade held in Revere on October 14, 2013, Interim Suffolk County Sheriff Steven Tompkins once again lost control of himself when he began acting like an animal, and threatened to “kick his opponent’s (Bennett) ass…”

Jean Jackson, the owner of La Paix barber shop at 1059 Hyde Park Avenue in Boston, testifies how Suffolk County Interim Sheriff Steven Tompkins unlawfully pulled out his badge and demanded that the store owner remove Douglas Bennett for Sheriff's sign "because it was too early to put up campaign signs..."

In many of these thefts and destructions of personal property, Mr. Tompkins, along with another Commonwealth of Massachusetts employee from the Suffolk County Sheriff’s Department, proceeded in entering these store fronts and identifying himself as the Sheriff of Suffolk County, pulling out his “sheriff’s badge” and demanding that the store owner remove the sign or they would get “on his (Tompkins') bad side.”

Attached with this press release is:

3. A complaint from Bennett to the Massachusetts State Ethics Commission Enforcement Division asking to investigate Tompkins’ actions from August 14, 2013.

Doug Bennett running this year after all - for sheriff

Doug Bennett, who has made two unsuccessful tries for a seat on the City Council, today announced he's setting his sights a bit wider - on Suffolk County Sheriff, a job that involves running the two jails that serve Boston, Chelsea, Revere and Winthrop.

Bennett, a Dorchester resident, is running as a Democrat this year for the six-year term to replace Andrea Cabral, now state secretary of public safety. Steven Tompkins, a former Cabral aide, is current acting sheriff.

Bennett's statement is as follows and he will be explaining to the voters why they should vote for him tomorrow morning Friday May 31th at 7AM on TOUCH 106.1FM:

"With the appointment of Andrea Cabral to the Public Safety Cabinet Position in the Governor’s administration, there will be a special election in September 2014 to elect a full-time Sheriff to serve out the remainder of a six year term which expires in 2016. Therefore, I ask for your support for Sheriff of Suffolk County. I am starting early in effort to run an aggressive and triumphant campaign.

As Sheriff, I will oversee a $122 million budget, the Nashua Street Jail and South Bay House of Correction, and the Civil Service Process here in the county.

With somebody else's placard, Channel 4 reports.

The Supreme Judicial Court ruled today that the Suffolk County Sheriff's Department had the right to get out of a ten-year lease seven years early because of a clause in a separate city document that the landlord didn't get canceled in writing - and which was not attached to the lease it did sign.

This is the second time in two years the sheriff's office has managed to get out of a lease because of language in documents not directly tied to leases.

At issue was a lease on office space on Morton Street in Jamaica Plain. In 2000, the sheriff's office signed a ten-year lease for the space, but then canceled the lease three years later when state funding for the program it had housed there ran out.

The court noted that the landlord's agent noticed this at the last minute, looked up the city form and told the sheriff's office he could not sign the lease unless that clause were stricken. Whoever negotiated the lease for the sheriff basically told him it was just boilerplate to keep the lawyers happy. The agent signed the lease but attached a letter noting that conversation.

The court, however, ruled, tough, it's not the sheriff's fault the landlord failed to follow through and get the cancellation in writing, as part of the lease, so the sheriff wins.