It's official: West Roxbury residents will have to drive into Dedham for chain burgers a step up from McDonald's

Boston Restaurant Talk confirms that Burger Fi on Spring Street is now well and done: Those "closed for renovations" signs should really read "closed until we sell the place."

That leaves the Dedham Five Guys as the closest non-McDonald's/Burger King chain outlet to West Roxbury.

If you really like Tasty Burger, don't stand in front of its South Boston location with a beer next St. Patrick's Day, 'kay?

The Boston Licensing Board yesterday handed a warning to the Tasty Burger on L Street for the beer-holding people Boston Police detectives said they found loitering outside its pick-up window during the St. Patrick's Day parade this year. Read more.

A restaurant broker is advertising a "top-notch fast casual restaurant" in West Roxbury that has $900,000 worth of "brand new first rate facilities," a beer-and-wine license, a location at the end of the building it's in and 85 indoor seats and 20 patio seats: Read more.

We are not worthy, but apparently we could be soon

Is there room in the Boston area for one new burger place? Boston Restaurant Talk reports that Worthy Burger, a Vermont outlet that has attained a sort of cult status for both its wood-fired burgers and its craft beers, is looking to open an outlet in the Boston area.

A moooving restaurant story out of JP

Jamaica Plain News reports Forest Hills residents will no longer have to hoof it all the way up to Centre Street for gourmet burgers, because Grass Fed is opening a second location in the space where Tonic used to be, across from the T station.

The city is holding a neighbors' meeting on Wednesday on the idea of converting the old Kelly's at Commonwealth and Harvard avenues into a Five Guys hamburger place. Read more.

How far we've fallen: Not only do a bunch of Bruins fans in a bar go into foodgasms over a McDonald's hamburger, they don't realize who's feeding it to them. Also, McDonald's is too cheap to get the rights to show the Bruins logo.

A different kind of burger in West Roxbury 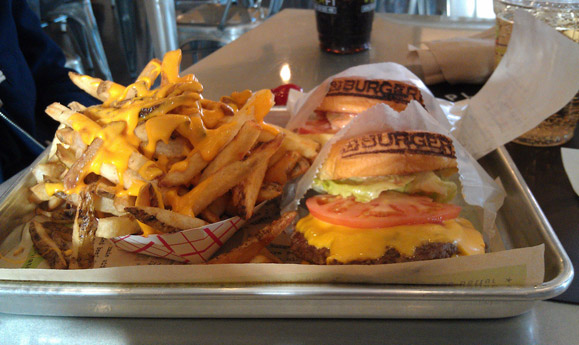 The BurgerFi recently opened on Spring Street, a couple doors down from Panera. Old timers could be forgiven for walking in and going "What's this doing in West Roxbury?"

Goody: Fenway Wahlburgers gets a liquor license; Fenway Park gets permission to make it easier to liquor up

The Boston Licensing Board yesterday gave Wahlburgers permission to spend $325,000 for the liquor license of the old Goody Glover's in the North End for its impending burger joint at 132 Brookline Ave.

The Boston Business Journal reports on changes at b.good:

The burgers and shakes are still available, but they've been surpassed in popularity by kale-and-quinoa bowls and smoothies.

The owner of the McDonald's at Harvard and Commonwealth avenues is seeking permission to stay open around the clock.

The Boston Licensing Board considers its request to extend its hours, which now run 5 a.m. to 2 a.m., at a hearing on Wednesday.

A little over a year ago, the board agreed to let the burger place change its opening hour from 7 a.m. to 5 a.m., after owner Bob King agreed to take steps to keep his franchise from becoming a hangout for methadone patients.

Burgerfi, which sells things such as free-range meat patties covered in American cheese, bacon, hash browns and maple syrup, goes before the Boston Licensing Board next week for permission to open up in the Shaw's plaza on Spring Street, where LeanWorks closed up months ago.

The chain, which already has an outlet on Comm. Ave. near BU, is also seeking permission to buy the beer and wine license of Beijing Kyoto in Chinatown, in what would be a rare example of an outer neighborhood grabbing an alcohol license from a downtown or waterfront eatery.

UBurger, 140 Tremont St., goes before the Boston Licensing Board next week for permission to start serving beer and wine.

If the board approves, the burger joint would buy a beer and wine license from a Fuddruckers at the airport.

The board's hearings begin at 10 a.m. on Wednesday in its eighth-floor hearing room in City Hall.

Smoked meats? Tasty Burger wants to open up in fume-filled Back Bay station

Tasty Burger thinks there's a market for a burger bar that also serves up beer and wine in the diesel-filled confines of Back Bay station.

The local chain goes before the Boston Licensing Board next week for permission to buy the beer and wine license of the defunct Parlor Pizza in West Roxbury for a proposed restaurant that would also feature 30 patio seats on Dartmouth Street - as well as entrances on both Dartmouth and Clarendon.

What seemed like most of South Boston showed up at Castle Island today for the first day of Sullivan's in 2014.

Although the air temperature was 52, the wind chill was way, way lower, thanks to an unceasing and heavy wind that kicked up white caps on Pleasure Bay, where at least the wind surfers enjoyed it.

Consumerist reports a Massachusetts Five Guys - exactly which one is not disclosed - has a manager, who, when confronted with a consumer complaint about an order goes by, gets really fried. And then sends a copy of his tirade to the person who filed the complaint.

Craving a really good burger in Allston. Anyone have any good leads?

East Boston McDonald's vows to clean up restrooms, where cops keep finding drug addicts, one of them dead

The new owner of the McDonald's at 178 Border St. says a $1-million renovation of the facility should curb the appetite of drug addicts who keep shooting up in his restrooms.

Chief among the new changes: The new restrooms won't have locks, Peter Tripoletti told the Boston Licensing Board today.

Tripoletti was there to answer a citation by Boston Police for "permitting an illegality, drug use on premises," issued after several incidents over recent months involving the restrooms at the restaurant. Police say addicts would go into one of the restrooms, lock the doors and shoot up.

Harvard Avenue McDonald's gets OK to open at 5 a.m.

The Boston Licensing Board says the presence of methadone patients who aren't breaking any laws isn't reason to keep the McDonald's at Harvard and Comm. avenues from opening at 5 a.m.

Its approval means the burger/Egg McMuffin emporium can now open 21 hours a day. It previously had opened at 7 a.m., which franchisee Bob King said meant he could not serve the crowds clamoring for McDonald's take on breakfast earlier in the morning.