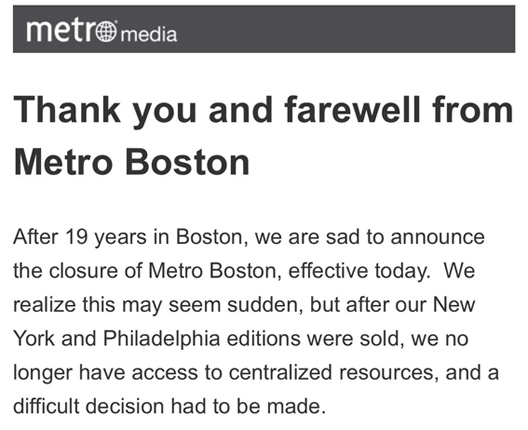 A Boston Metro reader forwarded this note he got today: After 19 years, the paper for subway riders is no more. Read more.

Area newspaper: Yeah, our headline on a story about sexual attacks was a bit much 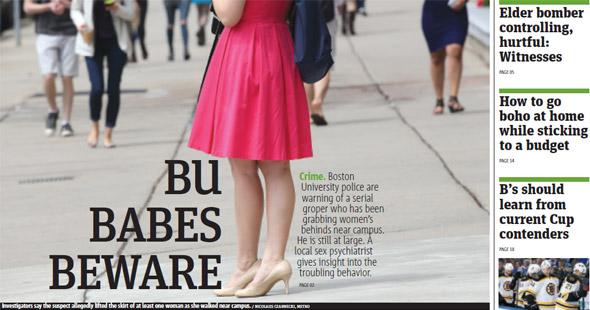 This morning's Boston Metro cover story was about the series of groping attacks reported around Boston University over the past few days, with a "BU Babes" headline superimposed on a photo of a woman from the waist down in a pink dress and heels. Read more.

When offered the choice between being a banana and a Mario Brother, he'll take Luigi every time

Elise Ramsay says goodbye to the guy who gave her a copy of the Metro every morning at the Davis Square T stop:

This tops my list of crazy decisions. And I've made many. On a doubledecker bus in the storm en route to #Nyc and the tires are spinning.

Have now officially been on a bus to #nyc from #boston for 12.5 hours with no food or water and an hour on the snowy roads to go.

Cannibalism will be forgiven.

So spray everybody you see on the T with Lysol.

Metro does its best to dispute study on our regional brainpower

See if you can figure out the disconnect between the front-page headline and two of the three bullet points immediately below it:

Think you can write better than the Metro?

The Metro is hiring a reporter to report for the "18-34 city-centric upwardly mobile men and women" who read the paper:

Ah, what would we do without the Metro? Yesterday, they alerted West Roxbury to the new French pizzerie on Centre Street near LaGrange Street: Denois. Today, Dan Seitz reports they accompanied a short item about Tim Murray with a photo of Therese Murray.

Does Boston Metro know about Boston MetroGuide, which is seeking to hire writers who will get paid only if they also sell ads to go with their "articles"?

... This is your chance to be the official blogger/commentator/voice of Boston on a new Metro Guide Website that is quickly growing in popularity. ...

The newspaper that thinks it's TMZ.com

That would, of course, be the Metro, which today determined that Tiger Woods's little mishap was the day's top news, which set off Marshall T. Spriggs:

... Since you seem to be rapidly becoming a Boston specific version of the TMZ website that you reference in your lead article, the only question left to me is whether I should even bother to pick up the Metro. ...

Metro: Service journalism at its finest

Boston's largest, most award-winningest newspaper has a handy tip for Beacon Hill parents on Halloween: "Wash any loose rat droppings from your kid's candy before ingesting."

Also alerts us that lots of college students live on Mission Hill and that drug users have been known to frequent Central Square.

Who actually voted the Metro 'Best Newspaper of the Year'?

The Weekly Dig reveals: Executives at agencies that buy ads in newspapers, who vote on things such as how eagerly a given newspaper bends over backwards for advertisers.

Oh, Metro, you're so reliably unreliable

Boston Metro gets hep to this whole idea of people using Twitter to broadcast the latest MBTAfail, but see if you can figure out what's wrong with this paragraph:

MBTA Transit Police Lt. Commander Robert Lenehan, who runs transit police Twitter page, posted a message last Thursday for riders to expect large crowds at North station due to a TD Garden event. He hopes to continue to learn about what riders want to hear about.

Well, aside from the missing "the" in there, that is. Yep, unless you happen to know that Lt. Commander Robert Lenehan is posting at MBTAPoliceTPSA5, you're never going to get to see his tweets.

Metro's new half-owners Swedish as ever

The Herald reports the Swedish company that owned 51% of our scrappy omnipresent tabloid has sold its entire US operations to the guy who used to be its CEO, Pelle Törnberg. Like the other owner of the paper, Metro in the US was a money loser.

Go figure: Foreclosure-help ad in the Metro may not have been legit

The state Attorney General's office has gotten a temporary restraining order against a New York firm that allegedly used ads in the Metro to drum up business among homeowners facing foreclosure by promising legal services it couldn't deliver. Among other things, the company demanded $1,500 up front from prospective clients, which is illegal in Massachusetts and also, despite calling itself Loan Mods by Lawyers, it, in fact, employed no lawyers, the Attorney General's office reports, adding the Metro cooperated fully with state investigators.

Have you read the news today, oh boy?

Could anything stun Metro readers?

The Herald breathlessly reports on an incident at the Forest Hills T stop on Wednesday:

Scores of Metro readers were stunned when they picked up the free newspaper the other morning and discovered a frightening front page splashed with anti-Israel rantings.

Why no pictures of either the frightening front page (come on, we're Herald readers, we can take it!) or of stunned Metro readers lying prostrate at the bottom of the escalators like pigeons just given electric shocks?

Become their next sports editor:

Ideal candidate should possess the ability to find ways to lure readers from other sections of the paper into sports and demonstrate the creativity and willingness to break through the standard elements of a sports page.