A group of anti-vaxxers who sued to try to block a Boston indoor vaccine mandate aren't letting the end of the requirement stop them: They've filed an amended complaint that now seeks $6 million for each of them for alleged harm the rule did them. Read more.

A group of anti-vaxxers, led by the suspended cop who is part of another group that screams at Michelle Wu's kids about how their mom is Hitler, today filed a federal suit to try to overturn the city's requirement people show proof of vaccination at restaurants and other indoor spaces - hours before Wu announced she was lifting the mandate because of how far Covid-19 statistics in Boston have fallen. Read more.

Boston's Covid-19 numbers are dropping fast enough that the city could meet its metrics for ending a requirement that indoor diners and gym users show proof of vaccination "in the coming weeks," Dr. Bisola Ojikutu, executive director of the Boston Public Health Commission said this morning. Read more.

Attended a protest or vigil recently? Better get tested for coronavirus, city says

Boston and Massachusetts General Hospital said today they've begun recruiting 1,000 people in East Boston, Roslindale and in 02121 and 02125 for antibody testing that might help show just how widespread the virus is in those communities. Read more.

South End now has highest rate of Covid-19 infection in Boston; could be linked to higher testing rates at neighborhood homeless shelters 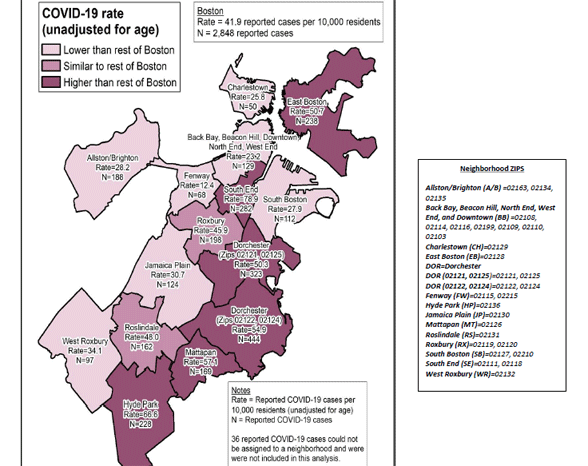 Boston Public Health Commission figures released tonight show the South End now has the highest rate of Covid-19 infection among city neighborhoods - its 282 confirmed cases as of Thursday give it a rate of 78.9 cases per 10,000 people, compared to a rate of 66.6 in the neighborhood with the next highest rate, Hyde Park. Read more.

NBC Boston reports on the decision by the Boston Public Health Commission to ban menthols from convenience stores and other places where the under-21 set is allowed in.

A city analysis of public-health data from 2016 and 2017 shows Bostonians are having healthier babies and are less likely to grow up smoking, or do lots of binge drinking or have unsafe sex than in years past. But the numbers also show a rapid rise in opioid deaths and too many of us are anxious and torpid - fewer Bostonians are exercising and rates of certain chronic diseases remain unchanged. Read more.

The Boston City Council agreed today to hold a hearing on the recent decision of the Boston Public Health Commission to shutter two programs, with a total of 40 beds at the Southampton Street shelter, aimed at helping homeless people - in particular those who are HIV positive - gradually reenter society. Read more.

Sorry, kids, no more tobacco for you

The Boston Board of Health voted today to raise the minimum age to buy tobacco in the city from 18 to 21. That includes e-cigarettes.

When news broke of an apparent foodborne illness striking down BC students who ate at the Cleveland Circle Chipotle, the chain issued a press release that made it sound like it had closed the outlet voluntarily.

In fact, Boston health inspectors ordered the place shut yesterday, both because of those ailments and for two other key reasons:

"There was an employee that was sick during their shift on Thursday."

Public-health official say that there have been 65 cases so far - some among people not affiliated with BC.

City and state health officials warned today that Scarboro Pond in Franklin Park appears to be experiencing a bloom of blue-green algae and are warning visitors to stay well away from the water - and to keep their dogs away as well. Read more.

City health officials and police are trying to figure out what's causing a sharp increase in drug overdoses in Boston this year.

In a statement, the commission said samples from street purchases by Boston Police "have not indicated more potency or drugs laced with particular potentially-fatal substances."

UPDATE: Roxbury Here has a much more detailed report on the Roxbury meeting.

City officials will meet with residents tomorrow evening to discuss their plans for the Radius Specialty Hospital on Townsend Street.

The Bay State Banner reported last week the Boston Public Health Commission is thinking of using the facility for 265 beds in "closed campus" programs - participants would be bused in and out and would not be allowed to leave the Radius campus during their stays.

Apparent enterovirus cases in Boston have been on the decline since they peaked the week of Sept. 20, the city's director of infectious disease said today.

Dr. Anita Barry told the Boston Public Health Commission board that emergency-room visits and hospital admissions for children and teens with severe asthma or other respiratory problems are still running ahead of last year but that rates have been dropping steadily since last month.

Crews are working seven days a week to prepare two dormant public-health buildings in Mattapan for long-term use by halfway programs, while the city looks to rent or buy additional space - including possibly in the closed Radius hospital in Roxbury - for the several years before the bridge to Long Island can be repaired.

WFXT reports the city today shut the long decaying bridge to Long Island, forcing the Boston Public Health Commission to find alternate quarters for the more than up to 400 homeless people who normally spend the night at a shelter there.

Several city councilors say they're not opposed to medical marijuana but that Southampton Street is just the wrong place for one of the two dispensaries provisionally approved by the state because it's already in the middle of an area with large methadone clinics, a jail, trash-transfer facilities and the BU biolab.

And at a hearing today, councilors expressed major disappointment in state officials, none of whom showed up.

Have you seen the new Boston Public Health Commission ads with the guy with the blood-drenched face? Boston Biker has, and is not amused:

Helmets are good, and people should wear them. But showing a kid who looks like someone took a bat to his face is not going to get more people to ride their bike, and I think we would all be better off if more people rode their bikes, with or without helmets.