The Globe reports BPD is also looking at whether he issued threats on Twitter. His Twitter feed is gone now, but, of course, somebody saved his tweets and forwarded them to BPD first.

A clerk in the detective unit at the District A-1 station downtown was arrested on federal charges yesterday for allegedly forging her supervisors' signatures on overtime slips for time she didn't actually work, the US Attorney's office reports. Read more.

Boston to pay Brighton family $500,000 to settle suit over way police with a 'no knock' warrant smashed into their apartment and detained them and one of their children by mistake

A Faneuil Street couple today formally signed off on a settlement in their suit against Boston and several BPD officers who smashed their door down with a battering ram in the middle of the night and then cuffed them and their 15-year-old daughter as their other two children - 4 and 5 - watched, in a raid that was supposed to be aimed at somebody who lived in the apartment next door. Read more.

Walsh vetoes proposal that would restrict BPD use of tear gas, projectiles

Bodycam videos show cops going after protesters downtown after that George Floyd vigil on May 31; officials to investigate

Attacks on demonstrators from Boston Police 5/31

The Appeal gets copies of some of the video from the night of May 31, after a George Floyd protest ended and as looting began. The videos: Read more.

You have the right to secretly record police in public places, court rules

A federal appeals court ruled yesterday that people have the right to surreptitiously record police officers at work in "public spaces" such as parks, agreeing with two local activists that the First Amendment takes precedence over a state law banning private recording in that circumstance. Read more.

FBI agent, Boston cop who fatally shot suspected ISIS follower in Roslindale will have to undergo questioning by his mother's lawyers

A federal judge ruled today it's too early for her to consider whether to dismiss a lawsuit against and FBI agent and a Boston Police detective by the mother of the man they shot in front of the Roslindale CVS in 2015 when, they say, he came at them with a large knife. Read more.

Walsh commits to police oversight board with subpoena power

Mayor Walsh said today he agrees with recommendations of a police-accountability task force and will work to set up a new office with a civilian review board that can investigate complaints against police officers - with the power to subpoena both officers and documents. Read more.

Suffolk County District Attorney Rachael Rollins last night released a list of 135 Boston, State, Chelsea and MBTA police officers and one IRS agent who have been accused of crimes or misconduct that might possibly affect the evidence or testimony they supplied for criminal cases. Read more.

Boston cops friending some people on Snapchat and watching their videos for criminal activity; one man arrested that way charges they're only doing that with minorities

A Dorchester man who was arrested on gun charges in 2018 after Boston gang-unit officers say they watched him in eight separate Snapchat videos holding what appeared to be a gun - and then arrested again on gun charges four months later after officers watched him in a new video holding what appeared to be a gun - will argue that Boston cops with Snapchat accounts are only going after Black and Hispanic people. Read more.

WBUR reports on today's release of recommendations from a task force looking at reforming Boston Police. 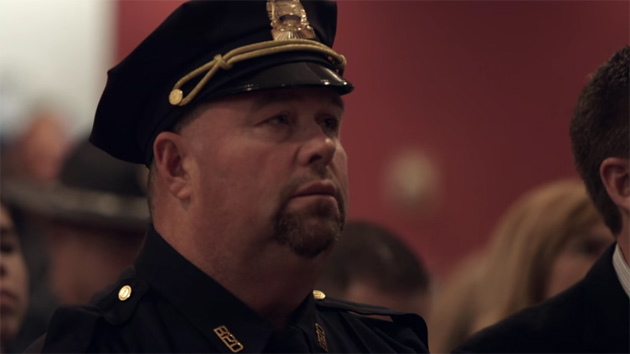 Twitchell during ceremony in which he became a sergeant, from "Boston's Finest."

In 2013, Donnie Wahlberg and his crews followed Boston cops around for a documentary series about how they did their jobs and protected the community from the bad guys. One of them was Robert "Twitch" Twitchell of Norton, who today was one of nine current and retired cops charged by federal officials with putting in bogus overtime payments while working at the BPD evidence warehouse in Hyde Park. Read more.

Nine current and former Boston Police officers at the BPD Evidence Management Unit on Hyde Park Avenue in Hyde Park were arrested today on charges they put in for some $200,000 in fraudulent overtime over three years, the US Attorney's office reports. Read more.

The Woke Windows Project has collected BPD data that includes information on incident and disciplinary reports, salaries and even traffic citations and keyed them all to specific BPD officers. Read more.

Even street people have rights

WBUR reviews body-camera video with defense attorneys of BPD action in the Methadone Mile during last summer's Operation Clean Sweep following the attack on a jail guard there.

Boston cops stop and frisk a newspaper editor in Roxbury

Update: Miller reports he was stopped outside the courthouse by cops who had never heard of his newspaper and because they thought he was photographing the nearby B-2 police station.

City Council President Kim Janey is expressing outrage that several of her colleagues had their houses vandalized in an apparent protest over the police budget. Read more.

The Boston City Council voted 8-5 today to approve Mayor Walsh's spending plan for the fiscal year that begins July 1, with the main issue being whether to make even more drastic changes in the police budget than the $12-million shift out of the police overtime account proposed by the mayor. Read more.