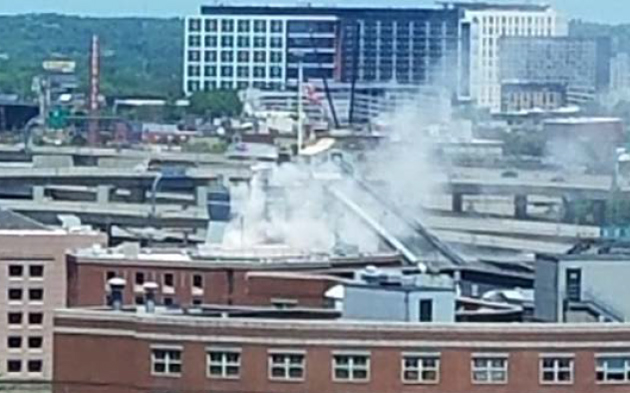 From the state complaint.

The Massachusetts Attorney General's office yesterday sued Boston Sand & Gravel over what it says is excessive sand and dust flowing into a small creek and into the air from the company's five-acre facility in Charlestown. Read more.

Sellers of unauthorized merchandise at tomorrow’s Twenty One Pilots concert at the Blue Hills Bank Pavilion can expect to have their products seized by police, in line with a court order issued yesterday. Read more.

Citizens Bank this week sued the armored-car company that shuttles money to and from its branches and ATMs to make the company keep doing that until the bank can fully replace it.

In its suit, filed in US District Court in Boston, Citizens said Garda Atlantic had threatened to stop all its service today, a move that would have left "thousands of individuals and small businesses" unfairly without access to their money.

STB filing against Winchester could have national impact

More than a year after local real estate agents tried to pressure Winchester into taking action against freight trains, residents clamored for action at community meetings. It was claimed that noise during freight operations violated a local noise ordinance and Massachusetts law. Nearly a month ago, the town's zoning board ruled in favor of the residents and a cease and desist was handed to Pan Am Railways.

In response, Pan Am filed with the Surface Transportation Board, stating that they are subject only to federal law in this case. Shortly after, on July 12, CSX Transportation, Norfolk Southern Railways, Housatonic Railroad, and the Massachusetts Railroad Association (which represents nine railroads within Massachusetts collectively) made a motion to participate in the STB filing.

CommonWealth magazine came across an interesting lawsuit involving the Boston Public Library and Maryanne Lewis, a lawyer-lobbyist and former state representative who is considering a run as an independent for Congress. The BPL says Lewis was improperly awarded a secret consulting contract by its former president, Bernard Margolis, and that Lewis never performed any consulting or legal services. Lewis says she did the "government relations consulting services" she was hired to do and wants the $32,000 she is still owed on her contract. The BPL is not only refusing to pay but demanding the $46,000 Lewis has already pocketed.