Angry Steve Lynch is the best Steve Lynch: MBTA to bring back all the services it just cut

WHDH reports the MBTA will be restoring the cuts it just made to service due to Covid-19 now that it has all this extra money. Of course, this being the T, that doesn't mean right away, it takes time to turn that ship around again. 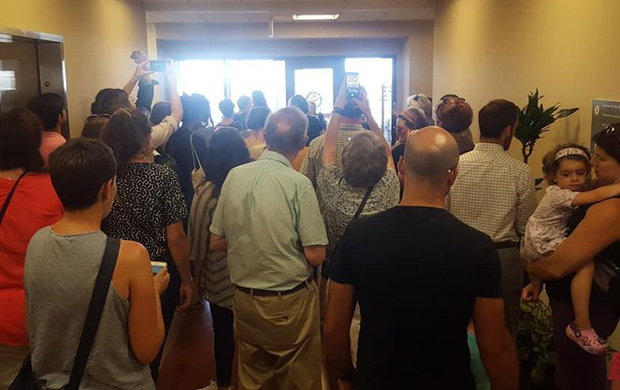 At this past Thursday's protest in Lynch's office. Photo via Tonya Tedesco.

On July 12, six of Steve Lynch's constituents visited his South Boston office to ask him to join other Democrats in working to close the camps and stop family break-ups. Lynch wasn't there and didn't respond. Read more.

Jamaica Plain doctor to run against Lynch in 2020

Mohammad Dar, an internist in Jamaica Plain, today announced today he will run on a progressive platform against incumbent US Rep. Stephen Lynch in the 8th District.

FAA officials spent 3 1/2 hours listening to residents and elected officials rip into the way planes now fly over a host of communities, at a Milton meeting on Thursday that they agreed to attend only after US Rep. Stephen Lynch threatened to cut the agency's budget for community outreach by $25 million.

The meeting brought out several hundred people from Belmont to Hull, to complain that a new GPS-based flight-path system may be great for airline profits and schedules, but means unlucky residents are now subjected to endless waves of planes, often starting at 5 a.m., for days on end, because of the way it slots planes into very narrow air corridors. Residents also said planes are flying lower than they used to, further contributing to the noise. Read more.

Yesterday, the Dorchester Reporter posted parts of an interview with US Rep. Steve Lynch in which he seemed to indicate he was fine with the president's plan to bring 10,000 Syrian refugees to the US: Read more.

This past week was a big week in politics here in Boston.

1. Steve Lynch will not run for Mayor.

Leading up to this past week, many speculated that 8th Congressional District U.S. Representative Stephen Lynch was using the U.S. Senate race to raise his profile so he could run for Boston Mayor. Lynch's chances were ruined by losing his hometown of Boston by a margin of 31,000 plus votes to Lynch's 28,000 plus votes.

Essentially, Markey "Al Gored" Stephen Lynch. To understand this, Al Gore lost his home state of Tennessee to George W. Bush in 2000 and that was the real reason why Gore lost the presidency not because of Florida. For Lynch to have won the U.S. Senate Democratic Primary, he needed to run up the vote against Markey in Boston and this just did not happen.

The 1st Suffolk Senate race was an unbelievable contest. My parish, St. Ann's, falls right inside this state Senate district. Three great candidates fought tooth and nail to replace Jack Hart who left his seat for a high paying job at a law firm.

Only one day before the April 30, 2013 Democratic Senate Primary for United States Senate, WBUR is reporting that Congressman Steven Lynch has canceled all but one campaign event due to an unspecified illness. Lynch's sole campaign event that will still take place will be his rally tonight at the Local 7 Iron Workers Hall at 7PM.

Blue Mass. Group takes a look at the contortions that would eliminate the current 9th Congressional District.

Won't anybody think of the Irish? According to the Dorchester Reporter, Steve Lynch urged a legislative redistricting committee not to break up his 9th District because that would mean breaking up the most Irish congressional district in the country.

The 2010 federal census means Massachusetts is losing one of its ten congressional districts.

Campaign roundup: Lynch could run for Senate, tells liberals they can suck it

Democrats hold a get-out-the-vote rally in Roslindale Square at 4 p.m. The kidlet wants to go, but reports that, unlike the last time Deval Patrick came to the Square, she isn't planning to give him a piece of her mind.

Steve Lynch, facing only nominal opposition tomorrow, murmurs he's thinking of running for Senate, again, this time in 2012. And he says liberals better get out of his way.

Lynch: Moslems should move proposed Manhattan center out of respect for 'us'

D'Alessandro said he supported the rights of a Moslem group to build a cultural center two blocks from Ground Zero: "We have a constitutionally protected right to practice our faith as we see fit, and you know, those rights, those core values mean the most when it's uncomfortable for us to adhere to them," he said.

Channel 2's "Greater Boston" will air a debate between 9th District incumbent Steve Lynch and Democratic challenger Mac D'Alessandro at 7 p.m. tonight (the debate will be taped at 4:30). Greater Boston airs for 30 minutes, so that would make this twice as long as their earlier debate.

Opponent charges Steve Lynch is as evil as Johnny Damon

We got this flyer from the D'Alessandro campaign yesterday:

Report from the Big Dog rally for Steve Lynch

Clinton pushes for Lynch, heads off to big wedding: Part of a set of photos by Dave Parsons.

Mike Ball was at the Ironworkers Hall in Southie today:

... You'd think the rally was for Clinton and Lynch was brought in to fluff the crowd for him. Lynch praised Clinton's presidency mightily and repeatedly, then Bill took over and did the same. He eventually got back around to saying how important it was to keep Lynch in office. ...

David Bernstein gets a peek at some poll numbers done in the 9th District before Lynch had any primary opposition.

The Mac D'Alessandro campaign says it's submitted 4,000 signatures to the secretary of state's office, which should be more than enough to get him on the Democratic primary ballot this fall against Ninth District incumbent Steve Lynch.

Man, he's one of my favorite perennial candidates - how can you not love a guy who crashes his car on the Jamaicaway while calling into WBUR - while denying allegations he was a groper?

Still, who knew that this time he's running for congress in my district, against Steve Lynch? Hey, anybody know what ever happened to Mildred Jefferson?