First mural by a local artist goes up on Greenway wall 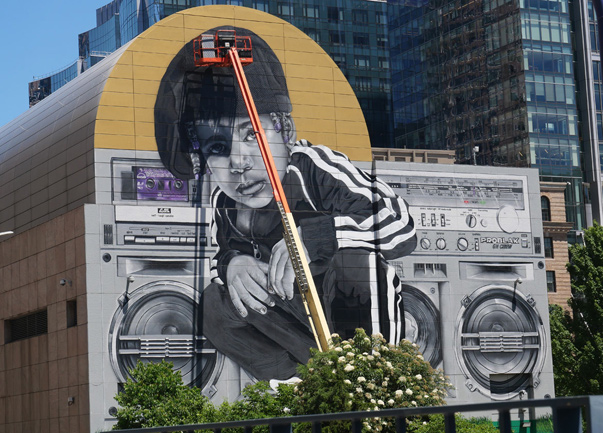 Greg Cook takes a look at Rob "ProBlak" Gibbs's new mural, "Breathe Life Together," going up in Dewey Square across from South Station. It's the tenth mural on the large wall, but the first by a Boston artist. 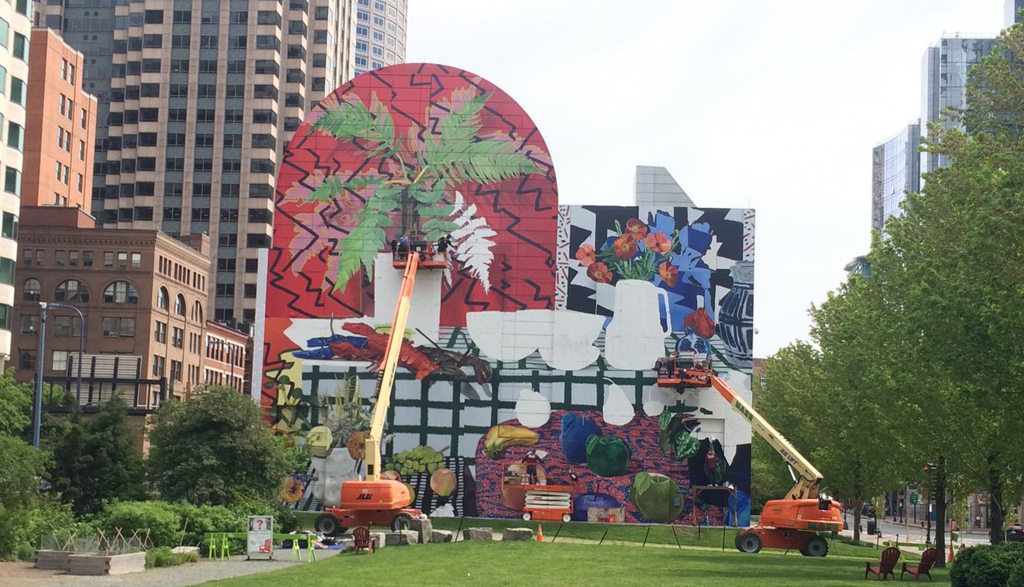 Adam Castiglioni watched workers putting up the new mural on the Greenway at Dewey Square this morning. 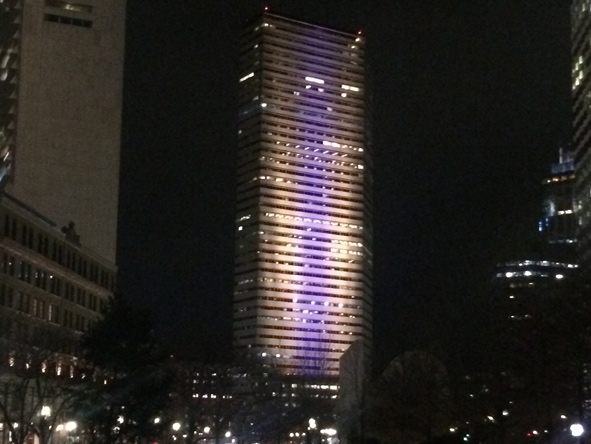 Adam Castiglioni reports One Financial Center - the tower across the street from South Station, was lit up in Lakers purple and gold tonight.

The Garden was also lit up: Read more.

After the downpour, a nice sunset 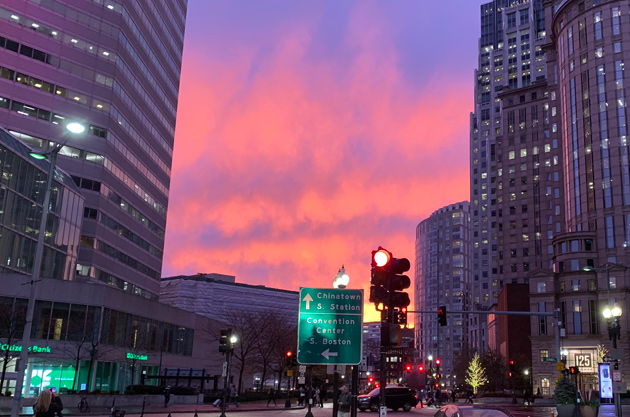 Flea looked up while crossing Dewey Square near South Station as the sun went down.

Meanwhile, traffic getting onto 128 north at the split was at a complete standstill, allowing the UHub mobile unit to snap this photo of the sunset: Read more.

Try this with cats 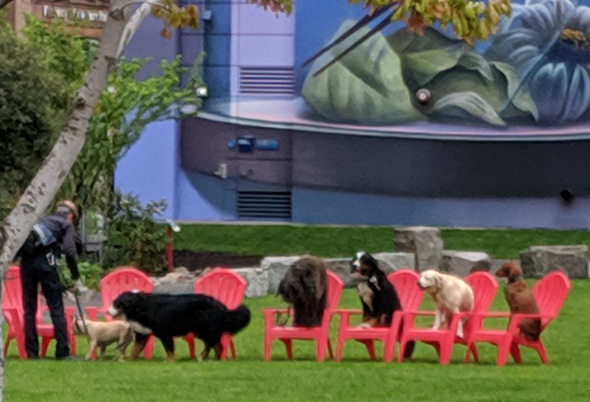 Brandy spotted a photographer lining up dogs in chairs in Dewey Square downtown at lunchtime today.

Adam Castiglioni watched artists at work on the Greenway at Dewey Square today as they painted Shara Hughes's mural.

Clover Food Lab founder and CEO Ayr Muir writes he's permanently garaging his pioneering fleet of Clover food trucks, with the Dewey Square one scheduled to go out with a party on Friday. Read more.

With Keytar Bear playing in the background, Jed Hresko noticed the Dewey Square fruit guy had a new sign up today. Looks aren't important, but you'll need to care and cook for him and, oh, no lip, please: Read more.

Just the thing to wash down your Zwieback with

Are we facing a shortage of toddlers with dehydration these days? For some reason, Pedialyte had some shills in Dewey Square yesterday trying to foist samples on passing adults. Maybe it goes great chilled with some vodka.

UPDATE: Ye hair-of-the-dog editor has been informed by reliable sources that Pedialyte is pushing itself as a hangover cure. Blecch. Read more.

The fruitin' o' the green

Protesters gather in Dewey Square for march to the Common

Steve Abreu looked out his window shortly after 4 p.m., when anti-Trump protesters who gathered there began to march towards the Common.

Meanwhile, scores of state troopers traveled to the South Boston convention center this afternoon to go over plans for protecting the much larger march planned from the Common to Copley Square. Read more.

Joe Pesaturo gives us the bird's eye view of South Station and Dewey Square on a snowy Saturday. 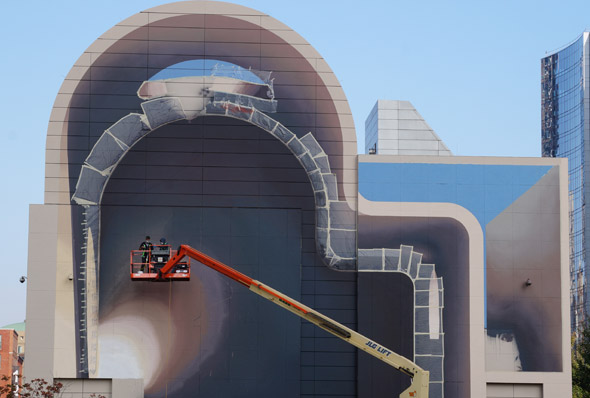 Artist Mehdi Ghadyanloo was hard at work in and above Dewey Square today, turning South Station side of the O'Neill Tunnel ventilation shaft into the Greenway's latest mural, to be called Spaces Of Hope. Read more.

Bldup reports the sale of 175 Federal St. to a German investor.

You work with what you get 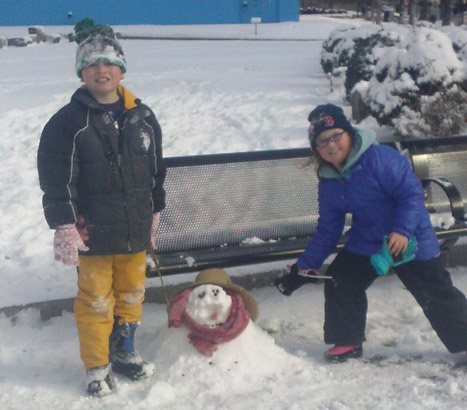 Patrick McMahon shows us a couple of kids with the snowman they built this morning on the Greenway in Dewey Square.

William Fleurant took a look at the newest Dewey Square mural going up on the Greenway this morning. 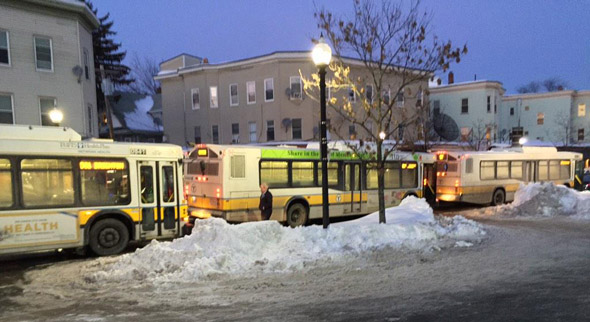 KWAPT shows us the non-moving bus traffic on Washington Street in Brighton, where a bus and a cab may have tried to occupy the same space at the same time. Traffic elsewhere is marginally better, except possibly in Kenmore Square, where the stop lights have taken the night off.

Atlantic Avenue by Summer is also a morass of non-movingness, as Cybah noticed out his office window:

Snowdecahedron Guy is back, and this time he brought friends 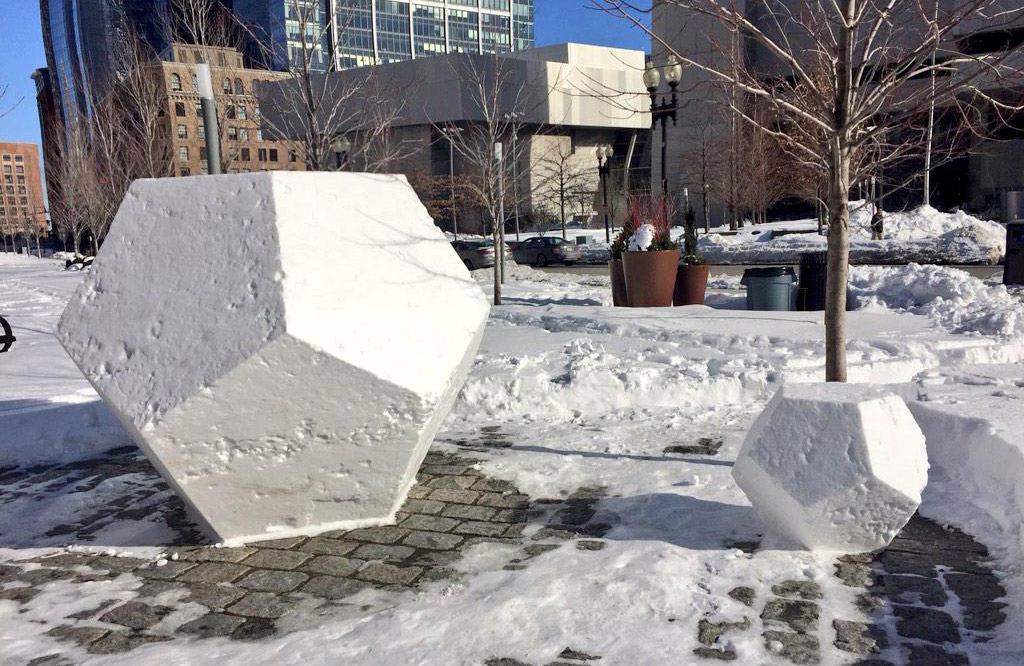 Could they be the work of Dan Sternof Beyer, who sculpted the forms in Porter Square and elsewhere back in 2011? Well, Beyer is a member of New American Art, a collaborative interested in "beautiful, interactive public art," and just take a look at what they posted yesterday on their Tumblr site.

Good thing Boston has more than one paramedic unit: Boston EMS Incidents reports that when a report of a person suffering a heart attack in the Prudential Center food court came in around 10:30 p.m., the Paramedic 1 unit stationed on Purchase Street was dispatched to the scene - but couldn't even get out of its bay due to the large traffic jam caused by protesters in Dewey Square and police blocking traffic to keep motorists from plowing into the protesters.

Dispatchers then routed Paramedic 2, based on Warren Street in Roxbury, to the mall, where firefighters and EMTs were treating the unconscious but still breathing person until the paramedics could arrive.

Some cops make arrest while others block protesters in Dewey Sq. Photo by Conqy.

A Ferguson protest in Dudley Square turned into a march of people that kept getting thwarted by Boston and State Police to shut one of the highways running through Boston.

The action started at the Southeast Expressway southbound at the Mass. Ave. connector, where protesters were mostly blocked - although they shut down the connector, police kept them off the Expressway.