Phantom Gourmet back on air, but with the less vile brother

WBZ reports the restaurant-chatter show is returning to TV, but only with Dan Andelman, not Dave Andelman and with paid advising by former Boston City Councilor Tito Jackson on how to not just be less racist but help support minority-owned businesses. 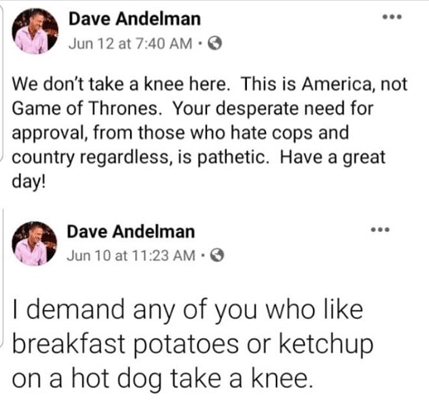 Some of the BLM stylings of Dave Andelman.

Update: WBZ takes the Phantom Gourmet off the air, at least temporarily.

After people began besieging WBZ, which airs "The Phantom Gourmet," with complaints, Dave Andelman tonight apologized for a making "a mistake" - a series of Facebook posts over the past ten days taking issue with Black Lives Matter protests and vigils. Read more.

Dave Andelman whining about bullying is the ultimate irony. He’s calling for Yelp to be shut down for bullying when he has a history of bullying and suspect business practices. Dave Andelman is a manipulative fraud: his TV show, token efforts as a “lobbyist,” and personal conduct all betray a contempt for his viewers and the restaurant industry from which he derives his livelihood.

"Do Not Serve" posters featuring Andelmans have gone up at the Staff Meal food truck, BostInno reports. It's partly due to an argument over whether food trucks are stealing business from restaurants, but goes back to last year's ugly little incident at Grill 23.

Grub Street Boston reports the owners of Grill 23 are standing behind a hostess who got called a little monkey on air by the Andelman boys because she wouldn't seat them before the dining room was scheduled to open:

Himmel Hospitality is shocked and saddened at the personal attack that has been made on an employee and in such a public manner.

It's painful to watch grown men in the media throw tantrums

Wah, poor Howie Carr is upset Scott Brown went to "60 Minutes" to shill his book instead of to him.

Wah, poor Mike Andelman at the Phantom Gourmet is upset a hostess at Grill 23 wouldn't seat him and his fellow Phantom Gourmet'er before the dining room opened:

It's 5 o'clock, and guess what, if the owner of Grill 23 was standing next to this dumb hostess, this moronic hostess who was just getting her, uh, jollies off by sticking to the rules of her little brochure in a little binder, this little monkey, her only job is to look at this binder and say don't let people in 'till 5:30. ...

Dan: Although in her defense she was good-looking apparently. I'd like to see a picture. Was she wearing yoga pants? These are things I want to know. I have a thing for hostesses.