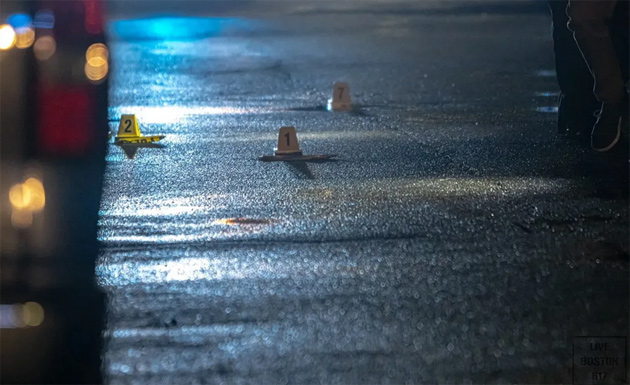 Evidence markers at the scene. Photo by Live Boston.

Live Boston reports a 14-year-old girl found with gunshot wounds in an Uber car early this morning at Metropolitan Avenue and River Street in Hyde Park was likely shot a few blocks away on Wood Avenue - an area that has seen a number of gunfire incidents, including one murder, and the shooting of another young teen, over the past year. Read more.

Vehicle rolls over on Cummins Highway in Mattapan; bursts into flames, at least two to the hospital

Stanley Stacos reports a vehicle flipped over on Cummins Highway where it meets Wood Avenue and Harvard Street shortly after 9 p.m. Read more.

A 13-year-old was shot in the leg on Wood Avenue near Westminster Street shortly before 10:30 p.m.

It's the latest shooting or gun incident within a couple of blocks of Ross Playground over the past year, including a murder on Ayles Road in October.

Between Westminster and Stafford streets, around 10:40 p.m. One vehicle hit.

Shots fired in area of Wood Avenue in Hyde Park

Boston Police are investigating gunfire around 10:30 p.m. on Frazer Street, off Wood Avenue and River Street in Hyde Park. One car hit, no people.

In February, a man was shot in the head and back at Frazer and Reddy streets.

Car into house after crash with bus in Hyde Park

WFXT shows us the car into the house at Wood Avenue at Ruskindale Road; reports no students in the bus at the time.

Shortly after 11 p.m. on Saturday on Wood Avenue at Frazer Street, according to Boston EMS Incidents and Hyde Park, MA Neighbors.

Bad crash involving a motorcyclist on Wood Avenue in Mattapan

Around 6:40 p.m. on Wood Avenue at Mariposa St. The fatal-accident reconstruction and homicide units were called in, just in case.

Boston Police say Yvonne Lewis shot a relative in the head around 12:40 p.m., then was arrested about five hours later in Peabody. Read more.

A Hyde Park man scheduled for trial next week on car-theft charges was arrested Saturday after a man who had had his car stolen noticed the vehicle being driven down a Hyde Park street and started following it, the Suffolk County District Attorney's office reports.

Maurice Pridgett, 33, was arraigned yesterday in West Roxbury Municipal Court on a charge of receiving a stolen motor vehicle as a subsequent offense and two counts of receiving stolen property over $250 - police say they found stuff in the stolen car that was taken during two separate car break-ins, the DA's office reports.

Police say a lieutenant walking the area of River Street and Wood Avenue around 12:30 p.m. - as part of a stepped up presence following a shooting on Saturday - saw four men arguing.

One pair of suspects suddenly turned and ran toward Wood Avenue, the other two followed.

The Norfolk County District Attorney's office reports it recently dropped charges of armed assault with intent to murder against three men because the alleged victim and the main witness - his sister - refused to testify.

Geraldo Lerouge, 20, of Hyde Park, Ricardo Clermont, 21, of Quincy and Milor Nerette, 18, of Randolph, had all been charged for the attack, in which the victim was allegedly jumped and sliced with a box cutter while coming out of a chocolate shop on Feb. 17.

The Portsmouth Herald reports two Wood Avenue residents have been arrested on charges they forced a 16-year-old girl into prostitution in a Portsmouth hotel.

Police charge Jean Payoute, 22, and Wayne Miller, 21, somehow found the Nashua runaway and advertised her as an escort available in New Hampshire, Maine and Massachusetts.

Two alleged members of the Wood Avenue Eagles gang were arraigned yesterday on charges they stabbed an alleged Roslindale gang member in the South Shore Plaza in Braintree on Feb. 17.

UPDATE: Police report the victim told them four men approached him in his driveway and one took out a gun and shot him in the face. A friend then drove him to Carney Hospital.