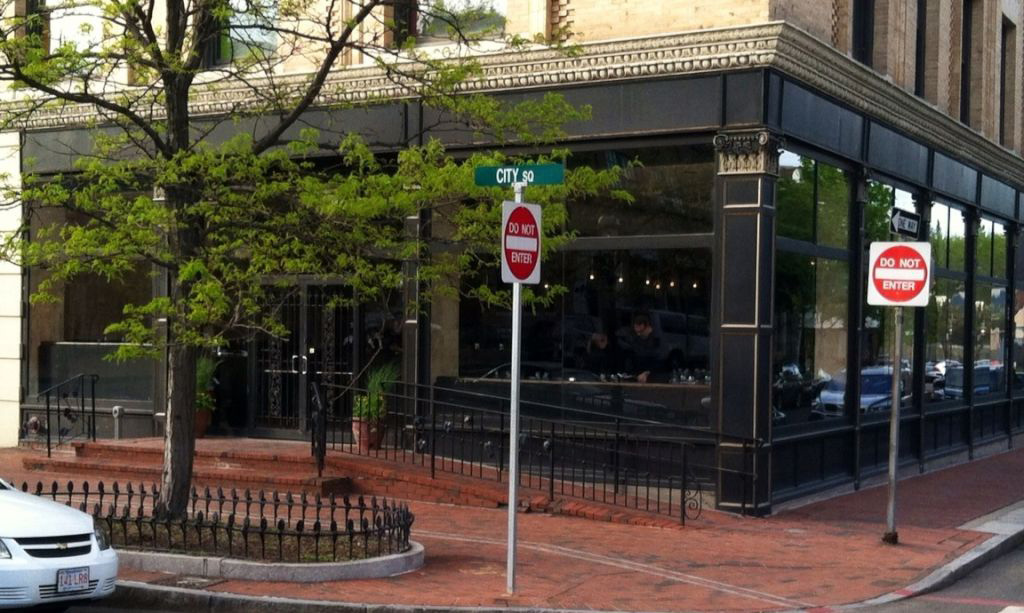 A roving UHub photographer snapped this shot this evening and reports Todd English's long shuttered City Square eatery appears to be open for business this evening, even if only of the soft-opening kind.

"It's killing me, I need to get this open," Todd English told the Boston Licensing Board today, adding that all that now stands between him reopening the once fire-ravaged Olives is one last fire inspection, scheduled for this Thursday. He explained the latest holdup along with his lawyer, Dennis Quilty, in response to a simple question from board Chairwoman Nicole Murati Ferrer: Read more.

This sure looks like a restaurant about to re-open

Inside the new Olives.

Tlecam peeked inside the rebuilt Olives in City Square the other day.

When Todd English appeared before the Boston Licensing Board in December, he said he expected to be serving food at his long shuttered Charlestown restaurant sometime in January.

Today, English, his lawyer and his construction engineer appeared before the board to explain why Olives still isn't open. The problem, they said, is that while the restaurant itself now passes muster with the Fire Department, the City Square building it's in did not.

English and attorney Dennis Quilty today.This time, the celebrichef told the Boston Licensing Board, he really, really means it: Renovations to his fire-ravaged City Square restaurant are nearly complete and he could be ready to welcome diners again in January.

At a hearing this morning, he said he's so confident now he's begun assembling his restaurant staff. Just yesterday, upwards of 180 people stopped by Olives to apply for work, he told board Chairwoman Nicole Murati Ferrer (board member Suzanne Ianella recused herself; board member Milton Wright was absent).

Think they can finish in 90 days? David Garlough peered inside Olives today.

The Boston Licensing Board yesterday agreed to give Todd English 90 more days to actually re-open his fire-damaged Olives restaurant in Charlestown or risk having his liquor license taken away. That's the same extension the board gave the celebrichef in July, when he told board members he thought he could have the restaurant rehabbed and re-opened by in eight weeks. It's also the same extension the board gave English in April, when he told the board he hoped to be open by July.

A grease fire in May, 2010 shut the place. At the April meeting, English blamed problems getting paid by his insurance company.

In the meantime, Charlestown residents have grown annoyed with the unopened storefront and the fact the restaurant still has dedicated valet spaces that nobody else can park in even though it's closed.

The board often grants continuing extensions to restaurant owners who show evidence they are actually working to open closed restaurants, although the board does occasionally lose its patience and revoke the liquor licenses of long shuttered establishments no matter what the owners say.

Unlike with food-serving licenses, the number of liquor licenses in Boston is limited by the state legislature.

The Herald considers the rumors the celebrichef is about to turn his debt-laden Kingfish Hall into a Belgian sudser, even as he faces a mid-September deadline from the Boston Licensing Board to re-open Olives in Charlestown or risk having its liquor license lifted.