Hiking Boston: Why should people in the back country have all the fun?

Miles Howard has created a guide to 25 miles of connected trails through Boston, from Mattapan and Hyde Park all the way up to Charlestown - complete with a variety of types of maps and step-by-step directions, along with lists of what you'll see as you hike Boston's own scenic countryside: Read more.

Citizen complaint of the day: Hey, Brookline, come pick up your stupid scooters

An irate citizen files a 311 complaint about the Bird scooters from Brookline he or she says are now piling up along the Riverway in Boston, where the things are not (yet) legal: Read more.

The Fog rolls in; the Fire Department responds 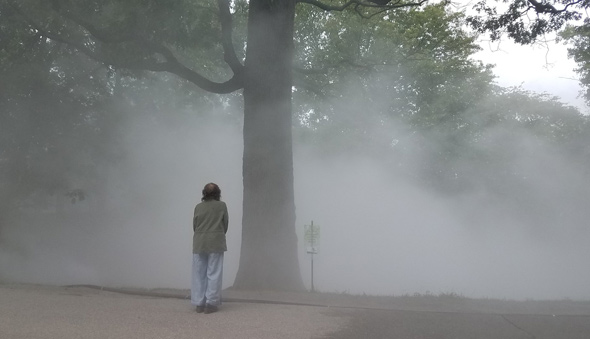 Vasant Marur visited the Fens location - and watched BFD roll up after somebody reported the "fog" as a fire (to be fair, the Fens do have a rep for catching on fire fairly easily): Read more.

Across Perkins Street and down an embankment from Jamaica Pond, you'll find the much smaller - and far less visited - Wards Pond.

Right now, the water lilies are in full bloom - along with other flowers, some of which you might have to look for pretty carefully, because they're kind of small. Read more.

The birds, berries and bugs of the Emerald Necklace

Arbotopia is a running account of wildlife found on walks through the parks of the Emerald Necklace.

Pin the tail on the ducky 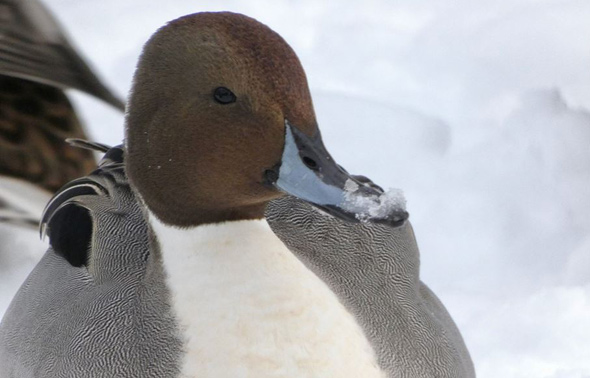 Mary Ellen spotted this northern pintail at Leverett Pond in the Emerald Necklace near Rte. 9 and Huntington Avenue yesterday.

Inside the Curley house. From the Boston City Archives collection of photos of the house.

James Michael Curley's old place on the Jamaicaway, which has mostly sat unused for decades, will get new life under a plan by the Emerald Necklace Conservancy to re-open it for regular historical and cultural events. Read more.

The Boston Sun reports on the nascent Charlesgate Alliance, which aims to restore what grandeur it can to Charlesgate, once a tree-lined pond where the Muddy River entered the Charles but now a dumping ground where homeless people drown.

Ouch: Mike Dukakis falls in the most Dukakis way possible

As you might expect, Mike Dukakis is a speaker at an MIT transit forum today. People of course wondered why he was sporting large bruises on his face and a bandage on the bridge of his nose. Cambridge City Councilor Jan Devereux, who posted a photo of the dented Duke, reports:

He fell picking up trash on the Emerald Necklace.

Councilors could be down with fines for feeding geese 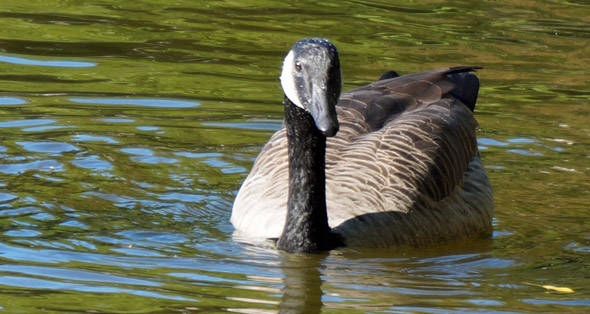 Winged menace gives you the eye.

Boston city councilors will take a gander at a gaggle of ideas to deal with geese and the crap they leave behind.

At a hearing today, councilors heard suggestions that included fining people who feed them, having parks workers and volunteers coat goose eggs with oil, which kills the chicks but fools the mother goose so she doesn't lay more eggs - and buying more umbrellas for city parks workers with which to find off angry geese when they try to grab the eggs to coat them in oil. Read more.

PRI interviews a Finnish landscape architect about everything that's wrong with the Emerald Necklace.

Ed. note: Interesting article, but it sounds like she doesn't know anything about the Muddy River reclamation project and didn't spend any time south of Rte. 9. 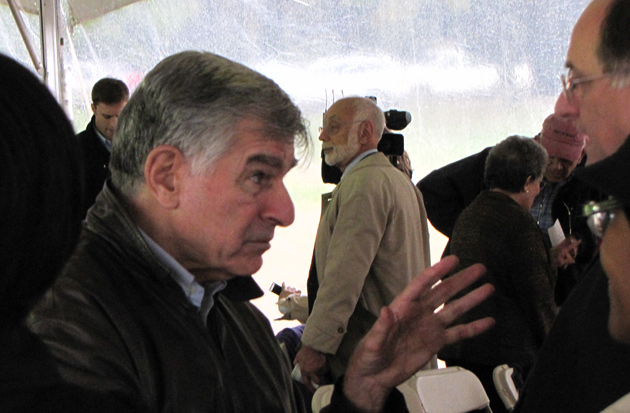 Work officially began today on a project to restore the Muddy River to something closer to what Olmsted might recognize - and to reduce the odds of another devastating flood along the normally placid series of brooks and ponds at the heart of the Emerald Necklace.

Officials said the first phase of the project, which will last three years and cost $31 million, will involve dredging current channels, replacing some culverts with larger pipes or opening them back up as streams and moving some nearby roads.

Missing burl. Boston Parks photo.Boston Police report arresting a man
who may be responsible for vandalizing trees in the Emerald Necklace in recent months - by sawing off burls, large bark protuberances that are popular among woodworkers and sculptors.

Police say Mike Scanlan's mistake this morning was wielding a chainsaw on a tree in the Fenway Victory Garden, where several witnesses saw and heard him - and then called police after they watched him walk over to an apartment building at 15 Park Drive.

When officers arrived at the gardens, they found "what appeared to be several pieces of freshly cut wood," police say.

Watch your fingers on the park side of the Jamaicaway

Patty Neal reports the snapping turtles are out in force this morning.

The city has installed a series of traps in parks to see if they can stop the destructive elm bark beetle:

The traps consist of 18.5"x 28" green plywood boxes mounted approximately 15 feet off the ground on trees located at least 150 feet away from any elms. Four have been placed on Boston Common, four in the Public Garden, three in the Fenway Victory Garden, and one in Copley Square.

Nathaniel Smith, who lives in Jamaica Plain, limns the joys of an early morning run through the Emerald Necklace:

I run around Jamaica Pond, then down around Wards Pond and Olmsted Park. The park system is great, with sidewalks, ponds, and unpaved wooded paths, and while very popular it feels like a private moment when I run at 7am.

There's another abandoned park restroom Boston wants to lease out

This time, in the Fens. The Fenway News reports Boston is seeking ideas for what to do with "the Duck House," an old restroom building on Agassiz Road that's gone unused since a fire in 1986:

... The Parks Department is seeking expressions of interest that provide for a public benefit and complement park management and programming. If a compatible use can be identified, the Department could grant a lease to a tenant who would restore the building for this use, provide public benefit, and enhance the Back Bay Fens. The Department would consider a long lease term; however, if the term is longer than three years, legislation will be required to enact such an agreement. ...

The Arborway sign was altered to read "Motorway" this morning. The message is somewhat ambiguous - are pedestrians and cyclists protesting the speed and noise of traffic along Boston's parkways? Or is it motorists laying claim to their turf?

When not getting dissed by surly help at Somerville creperies, Mike Mennonno tends to his garden in the Fenway Victory Gardens. He reports on a green war between members of the Fenway Garden Society over the height of some people's plants:

... For those who protested, the President of the FGS ominously reminded gardeners that back in the day they used to plow the whole thing under every year. He warned that if allies in the Parks Department weren't properly placated, Fenway gardeners could lose their unique privileges. No other community garden has individual plots the size of ours, each with its own fence and gate. He even went so far as to say that there were those who would love to see the gardens themselves, which they consider an eyesore, disappear. ...

City attorneys are rooting around Inspectional Services Department documents to see if the department went too far in approving expansion at the Bicon building off the Emerald Necklace, the Jamaica Plain Gazette reports.

Lyss, who is both a Bicon patient and a nearby resident, doesn't get the root cause of opposition to the building:

I understand the desire to keep Boston's neighborhoods leafy and keep them from getting overrun by rampant, soulless development. Let's be realistic here - it's not in a park in the proper sense - it's not surrounded by parkland in the traditional sense (ex: Tavern on the Green in Central Park). It's on a high-traffic rotary that isn't too attractive itself, save for the leafy entrance to Franklin Park.