Reports from this morning's protests at various T stops. Jennifer Smith has more from Dorchester.

When a picture is worth a thousand words, MBTA edition 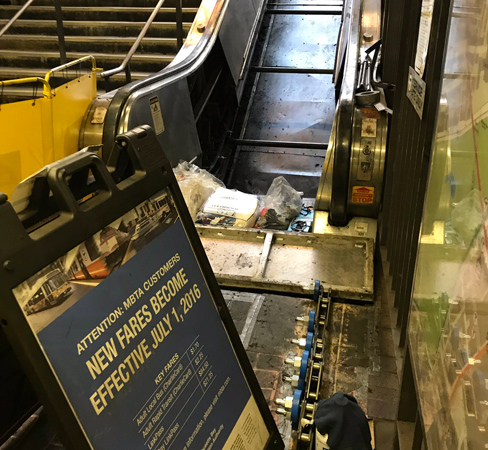 Aaron Rosenberg spotted this fare-increase advisory being used to block a Park Street escalator that's been out of service for three weeks - after he had a "45 minute commute to go 3 stops." Also, note the date on the sign.

Citizens, hear them out: City Councilor, volunteers to protest on the T on Fare Hike Day

Boston City Councilor Michelle Wu (at large) is helping organize a two-day protest against MBTA fare increases that will include stationing protesters outside each T stop and on as many trains as they can muster on July 1 - the first day of increased T fares. Read more.

The Globe reports the T is looking at replacing the current fare machines on buses and trolleys with new devices that would only accept payments by phone, credit card or CharlieCard.

A T board member said that in addition to speeding up boarding, the new system would satisfy what she claims is public demand to be charged based on distance or time of day. Ed. question: Any of you T riders clamoring to be charged more for riding at rush hour or from Forest Hills to Braintree?

The T is running new announcements on the Green Line, at least at above-ground stops: "Pay your fare! It's only fair!"

Oh my God. The "Pay your Fare!" announcements on the Green Line got obnoxious after three stops.

Particularly when its playing over drivers flagging people past farebox.

MassDOT says reductions in overtime and other costs mean the T should end the current fiscal year $75 million under budget - money that will immediately go towards plugging a budget deficit that starts July 1. Read more.

Schedule of upcoming meetings on fare hikes, the end of late-night service on weekends and commuter-rail schedule changes.

The Globe has the details - starts with a 10-cent increase for a single subway ride.

Back in December, MBTA officials warned they'd have to make their annual spring pledge to cut service and raise fares unless the legislature decided to give it more money.

As it now does at the end of every year, the MBTA is warning it will have to cut service and raise fares without action by the legislature to give it more money for the fiscal year that starts July 1.

A fare-hike protest that began outside the Park Street T stop this evening ended at Chinatown station on the Orange Line, where 25 protesters held open the fare gates on the inbound side and cheered when maybe 10 people went through the open gates - although some pressed their Charlie Cards to the readers anyway.

The Globe reports the T is halting the sale of 12-ride punch tickets good for six months because too many people were managing to get extra rides out of them. They'll be replaced with 10-ride tickets good for just a month.

When transportation officials say 'We just have to do it,' they're talking about roads, not the T

The state Department of Transportation will spend $54 million and periodically shut the Big Dig to replace those crappy light fixtures.

"We just have to do it," state Transportation Secretary Richard Davey said, to which Dan Kennedy asks:

How come no one said that about preserving #MBTA service?

The MBTA said today savings in everything from group insurance to electricity purchases mean fares will go up an average of 23% come July 1, rather than the far higher increases originally forecast.

However, the T is also counting on $51 million in savings that would require legislative approval, including $4 million in tort reform.

Although most riders will be spared the deep cuts initially proposed, the T said it will eliminate weekend service on the E line past Brigham Circle and on the Needham, Kingston/Plymouth and Greenbush commuter-rail lines. Eliminated entirely: The 48 Jamaica Plain Loop bus.

Before our April 4th Board Meeting, we will lay out our final recommendation for closing the Fiscal Year 2013 gap. We continue to work on identifying prudent one-time revenues that will allow us to stave off some of the proposed service cuts for one year. Our final proposal will include both cuts and a fare increase, however.

The Metropolitan Area Planning Council is releasing a report today that says proposed massive cuts in T service and fare hikes would drive more people to cars, which in turn would lead to hundreds of millions of dollars in new health-care costs as drivers crash, die and gain weight. Mariana Arcaya, MAPC public health manager says:

So the MBTA hearings are over, now what?

The Outraged Liberal considers what's next for T riders, notes the Globe buried a statement by acting T GM Jonathan Davis that the authority is redrafting its plans for the coming year and that it won't be going with either of the two options for dramatic service cuts/fare hikes it proposed in Janauary.

The T Riders Union organized a pack of superheroes to fight evil service cuts and fare hikes at an MBTA hearing in Somerville.

Hitler reacts to the T's plans to cut service

Some subtitles NSFW. Plus, you know, Nazis. Via the Phoenix: