A world-class city needs a Hyatt with a liquor license in the Seaport, lawyer tells board

When applicants go before the Boston Licensing Board for a liquor license, they have to answer the question of the "public need" for the license. At a hearing this morning, a lawyer for the Hyatt chain cited Boston's international stature as a reason for the board to approve the chain's proposed purchase of the license now used by An Tain on India Street for a 294-room, 12-story hotel it's building at 315 Northern Ave. in the Seaport. Read more.

The Boston Guardian alerts us to a battle between downtown resident and business groups and a Winthrop company that wants to install a 25-foot-tall electronic billboard at Washington Street and Temple Place. Read more.

Jon Keller finally finds something to smile about

Our resident scold, who normally spends his days complaining about our driving habits and kids on his lawn, is happy today because Boston has become world classier than New York: GE moved here, Berklee is bigger than whatever allegedly passes for music education in that sad, sorry city to our south and, oh, yeah, Yankees suck!

A new low in Boston world-classism

I was all set to complain about Dan Shaughnessy returning to his stupid "tomato can" fixation in his piece yesterday about just how badly the Celtics did (sorry, Dan, the German for "tomato can" is not "tomato can"), but, no, if I'm going to get all ranty about a Globe columnist today, I'm going to get ired up about Mike Ross, because, unlike Shaughnessy, Ross really should know better. Read more.

Thanks, GE: As the T falls apart and fares look to go up, the state considers building Boston a helipad 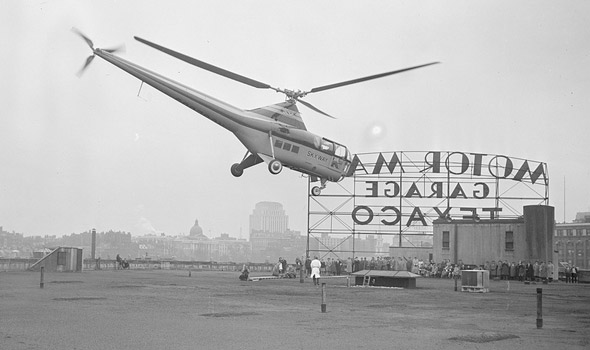 The top of the Motor Mart in Park Square used to be a heliport. Photo by Leslie Jones.

First we learn the city might spend $100 million to fix the old Northern Avenue bridge so GEsters don't have to worry about getting stuck in traffic. Tonight, the Globe reports our local titans of industry can't wait for GE to come to town so we can get us a helipad - one that the state is looking at building as part of the $120 million in infrastructure it promised GE, because what the hell kind of world-class city doesn't have a helipad?

The downtown business community has gone without a public-use helipad for more than 15 years. But that could be about to change. GE’s pending arrival has jump-started the conversation about building one.

They quote some hand servant to the ruling class that "it’s time to consider this as a transportation system amenity."

Photo from the BPL posted under this Creative Commons license.

Texas city strives to be even world-classier than Boston

Watch out, world: San Antonio is on the move:

Sandy Morander, president and CEO of the YMCA of Greater San Antonio, addressed the broad question of San Antonio's potential as a world-class city by comparing it to her stays in Boston and Dallas.

"A world-class city starts and ends with the people,” she said. Neither of those cities have "the collaborative spirit that San Antonio does. San Antonio is an amazing city."

Never mind the next Somerville, what's the next Boston?

Let's start with Budalang'i, Kenya, a town of some 60,000 people near the Ugandan border, which is slated to get its first college next year, despite the fact that the entire place floods several times a year:

"When you hear of Budalang'i, you easily relate it to floods and all sorts of calamities but that will soon be in the past if we embrace education. We cannot always grow through the conservative ways of industrialization. Look at Boston which is a world class city thanks to education. It has many top range universities and there is where Budalangi is going," [MP Ababu Namwamba] said.

You call this a world-class city? Walsh's treatment of Beacon Hill residents proves that a lie, she says

Karen Cord Taylor ponders why Mayor Walsh, who came into office with such promise and youthful vigor, is taking the side of a "dictatorial public works department that decided to destroy a city’s historic fabric with no consultation with a neighborhood" rather than listen to Beacon Hill residents who are only seeking to ensure handicap access ramps fit into the local millieu, like in Cambridge.

Boston leaders are always worried - is this city really world-class or not? City agencies that operate on a level of cheap, uninspired, unvetted solutions make it clear that Boston has a long way to go before it can be "world-class."

City Councilor Sal LaMattina (East Boston, North End) warns our status as a world-class city is threatened by inadequate funding for our parks:

I know that we recognize that protecting, preserving and improving our parks is vital to continuing to grow Boston's population and maintaining our status as a world class city.

As if you needed more evidence of how world class we are: Direct flights to Panama start in July

Massport CEO Tom Glynn summed it all up today:

It's official: We are world class

Who are we to argue with the president of the United States?

Boston is the vibrant, welcoming, and world-class city it is today because of Tom Menino.

Boston, Cambridge officials to set aside bickering and discuss how to retain world-class tech talent

City councilors from both cities are planning a joint hearing, with the World Class Cities Partnership (yes, that's a thing), to talk about ways of encouraging our smart people to stay here.

World Class City Alert: We're not the only place to fret about our status

The Toronto Star includes the following nugget in a review of a book about London by a Canadian who found himself living there:

For Torontonians, the idea of trying to define what, exactly, gives a world class city its caché and how we can make Toronto one is a sacred pastime, with the city always coming up short.

All that's standing between Boston and world-class status

Fashion, Amy declares. And she aims to do something about it.