Get ready for more life sciences along the water: Biotech developer pays Gillette $80 million for a parcel on A Street

A joint venture between a New York developer and a Los Angeles biotech venture-capital firm last week paid Gillette $80 million for a 2.4-acre parcel at A and Binford streets that Gillette now uses mainly for parking. Read more.

Some potentially major changes being studied for World Shaving Headquarters

The Fort Poin Boston Blog reports that Proctor and Gamble has started the early stages of a study of its Gillette plants in South Boston and Andover aimed at creating "new, world class, high tech production facilities, a cutting-edge innovation center and modern office space" - with an emphasis on a major continuing presence along Fort Point Channel.

A worker at the Gillette plant in South Boston and two accomplices have pleaded guilty to federal charges that they stole shaving cartridges hot off the assembly line to sell online, the US Attorney's office in Boston reports. Read more.

Tony Stark's deal to take over the Gillette plant 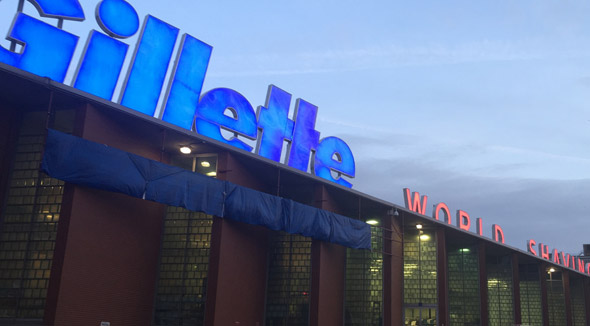 The lighting makes it impossible to read, but that covered over sign in Chris Devers's photo says "Stark Industries," so you have to wonder if Stark plans to divert all those razor blades for a new protective coating for his Iron Man suits.

Roslindale man charged up over the labels on Duracell batteries, so he sues

A Roslindale man and a Reading woman are suing Proctor and Gamble and Gillette over the risk that their Duracell batteries might leak some time over the next ten years.

Jamal Yusuf and Lauren Carlson are seeking to become lead plaintiffs in a class-action lawsuit for more than $5 million in alleged damages over the fact that labels on packages of "Copper Top" batteries with "Duralock" have a 10-guarantee - but also a warning that the batteries might leak.

A Mansfield company that makes systems for depositing thin coatings on things says Gillette is violating its patents in the way it makes its Fusion ProGlide razor blades extra sharp.

In a lawsuit filed yesterday in US District Court in Boston, Zond says it had extensive talks with Gillette about using its plasma technology to apply thin films to razor blades, but then Gillette used what it had learned about Zond's patents to make the ProGlide blades in a process known as sputtering:

Some background info on the ad.