Around 2:30 a.m. at 54 Holworthy St., Scott Parkinson reports. The homicide unit was called in due to the severity of his injuries.

NBC Boston reports the arrests of two men from Hyde Park and one from Dorchester. All are alleged H-Block gang members.

Gunfire at Humboldt Avenue and Hutchings Street in Roxbury

Around 4:35 p.m. Several fresh gunshot holes were found in a car parked there.

Around 6 p.m. at Waumbeck and Harold streets. The passenger in a car fired on two guys on scooters; hit one. The victim managed to run two blocks down Harold, but his injuries are bad enough to have the homicide unit called in, just in case. Police found the second scooter driver about 20 minutes later, with only minor scratches.

Four in car in Roxbury shot; one dead 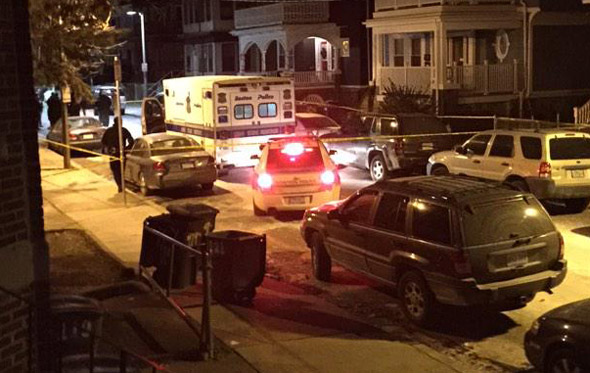 The scene on Harrishof. Photo by Ryan.

Stanley Staco and Boston EMS Incidents report four people in a car were shot around 10:45 p.m. on the 100 block of Harrishof Street.

Around 3:50 p.m. at Homestead Street and Humboldt Avenue.

Derrick Wood, arrested after a car crash near a Harrishof Street murder on June 9 faces arraignment next week for that murder.

A second suspect remains at large.

Either Wood or that second man allegedly shot Craig Marriro to death as he stood on Harrishof Street around 11:30 p.m. on June 8, the Suffolk County District Attorney's office and Boston Police charge. Following the crash, police officers

The Globe identifies the 48-year-old man shot to death on Harold Street Sunday night as Craig Marriro, whose brother died the same way at the same place 21 years ago.

Man shot to death in H-Block drive-by, suspects crash car a mile away

A man was shot around 11:30 p.m. outside 131 Harold St. by one of two people in a small red car that then sped away. Police found the crashed car about a mile away on Devon Street.

The passenger of the car was arrested on Devon Street, near Columbia Road. The driver, described as a black man, about 5'10" with short, cropped hair and wearing a white hat and a black shirt, ran away.

Because of the severity of the victim's injuries, the homicide unit was called in.

The Supreme Judicial Court ruled today that a wiretapped statement by an H-Block associate charged with murdering a young teen in a feud with the rival Heath Street gang can be used against him because H-Block is involved with the sort of "organized crime" for which state law allows wiretaps.

Teen shot in shoulder in Roxbury

Around 7:40 p.m. on Thursday on Humboldt Avenue, Stanley Staco reports.

Around 12:20 a.m., residents in the area of Harold and Harrishof streets reported up to 12 gunshots. Arriving officers quickly found two cars with "ballistic damage" (a third was found later). Not long after that, they found a woman on Harold with a gunshot wound to her shoulder.

Some 75 charged in H-Block gang crackdown

From a BPD poster. See the whole thing.

Raids that began before dawn have netted some 75 people on charges related to drug dealing and violence in Roxbury's H Block section, Boston Police report.

A little more than half of the suspects were already in custody on other charges; the rest were arrested today, police say.

DA: JP gang member who really wanted to shoot somebody on turf of rival Roxbury gang succeeded on second try

A Braintree man associated with Jamaica Plain's Heath Street gang was ordered held in lieu of $75,000 bail today on charges he shot somebody on the home turf of the rival H-Block gang on Friday after he allegedly tried but failed to shoot somebody else on the same street the night before, the Suffolk County District Attorney's office reports.

Prosecutors had asked for bail of $1 million for Paul Walrond, 22, of Braintree, at his arraignment today in Roxbury District Court. Judge David Weingarten set the lower amount.

The victim is in stable condition, police say.