City Council President Andrea Campbell (Dorchester) is calling for a public hearing to help figure out why Boston residents - and especially those who live in Roxbury, Dorchester and Hyde Park - pay so much more for car insurance. Read more.

Update: McCarthy apologizes for "muddled" comments not meant to attack anybody.

On the night of the preliminary election in September, outgoing District 5 City Councilor Tim McCarthy tried to rev up supporters of his aide and would-be successor Maria Esdale Farrell, who won a slot in the November final by coming in second against Ricardo Arroyo to represent Hyde Park, Roslindale and Mattapan. Read more.

In a city known around the world for protesters who hid their identities to throw tea in the harbor, city councilors to consider regulation to ban protesters from wearing masks 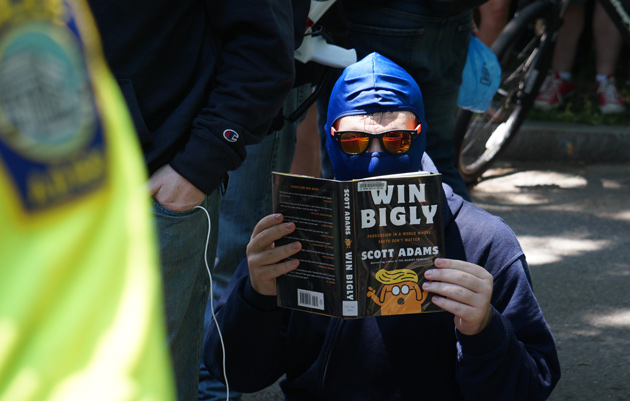 Masked right-wing protester at demonstration for immmigrant rights on the Common, 6/30/18.

Boston city councilors agreed today to consider drafting an ordinance that would prohibit protesters from wearing masks or other identity-hiding disguises at political protests - with the proviso that exemptions be considered for religious or medical reasons. Read more.

District City Councilors Matt O'Malley and Tim McCarthy both oppose a proposed charter school on Belgrade Avenue in Roslindale, near where their districts meet, but they said today there's no way they're supporting a resolution by at-large Councilor Althea Garrison to put the entire council on record as opposing the proposal. Read more.

BPS looks to get rid of unused school in Hyde Park

The Bay State Banner reports the School Committee is looking at handing the old Rogers Middle School in Hyde Park to the Department of Neighborhood Development, which typically then tries to sell off the buildings to a private concern. Read more.

Tim McCarthy, who has represented Hyde Park, Roslindale and Mattapan on the city council since 2013, announced tonight he's decided not to run for re-election this fall.

McCarthy to run for re-election as city councilor, but likely for the last time

The Dorchester Reporter interviews Tim McCarthy about his plans to run for re-election in District 5 - Hyde Park, Mattapan, Roslindale - and how, if he wins, he probably won't run again. He's already facing two opponents in the 2019 election. 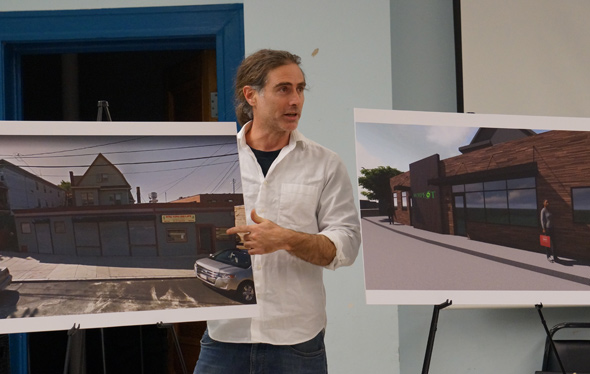 Mitch Rosenfield with current photo of building and rendering of proposed shop.

Three main types of people attended a community meeting tonight on a pot shop proposed for the intersection of South and Walter streets: People who support the idea of a locally owned shop, especially one in a long derelict storefront; people who don't object to the idea of a pot shop in Roslindale in general, just not at that location; and a smaller group of people who begged the would-be operators to think of the children and not open anywhere near families and Fallon Field. Read more.

Councilors to consider just how the T sucks for BPS students

Boston city councilors agreed today to focus some attention on problems ensuring BPS secondary students can get to schools - and after-school activities and jobs - in a far-flung city with an unreliable public-transit system, and will schedule a formal hearing on the matter. Read more.

Councilors want developers to stop chopping down so many trees

The City Council agreed today to look at ways to make developers take trees into consideration as they transform Boston into a denser city. Read more.

Charlie Redd announced this morning that he'll be shutting Redd's in Rozzie in about a month. Read more.

As it has done in years past, the Boston City Council voted today to formally ask the state Legislature to let Boston Police patrol the South Boston Waterfront. Although Boston officers respond there in emergencies, legally, State Police have jurisdiction. Read more.

'Charlie on the MTA' could be updated with new people to vote for to fight the fare increase: Members of the Boston City Council

Boston City Councilors say the $85 million the city directly pays into the MBTA every year should at least buy them a meeting with T officials to press their case to do more than just maintain an increasingly unreliable system they say particularly penalizes residents who don't live near a subway stop. Read more.

Ed. note: This post has been extensively rewritten to take into account Harvard's decision to postpone any work and to add a statement from somebody in favor of it.

Harvard's Arnold Arboretum says it's put a controversial proposal to put solar panels on an open field at Walter and Weld streets on hold.

Still, five city councilors have written Harvard President Drew Faust to make clear their objections to the plan - and request that Harvard use a neighboring parcel instead.. Read more.

The plane truth: Roslindale and surrounding neighborhoods overwhelmed with jets 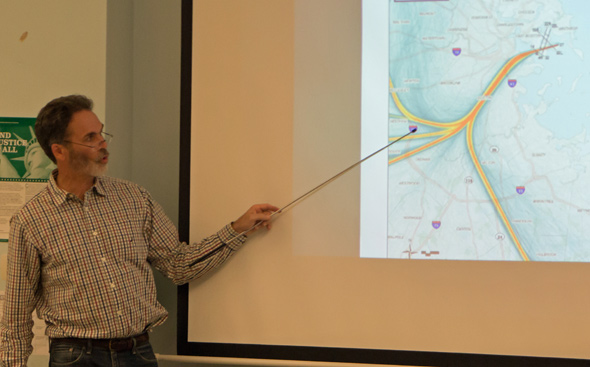 Wright points to the narrow flight path from Logan to Forest Hills; the blue shows the paths planes used to take.

Modern technology and a 1990s court decision have created a narrow flight corridor off a Logan runway that can mean hour after hour of planes roaring over Roxbury, Jamaica Plain, Roslindale and West Roxbury, from late at night to early in the morning, driving residents nuts. Read more.

Doctors, city councilors debate idea of center where addicts could shoot up under medical supervision

Giving addicts a place where they could shoot up under medical supervision would save lives and clean up neighborhoods, several doctors - and one heroin addict - told several Boston city councilors at a hearing today. Read more.

The Boston City Council voted unanimously today to tell the federal government to cut the nonsense and let Haitians here on "temporary protected status" visas stay here, because the awful conditions in their homeland that brought them here persist. Read more.