The Highland Park Neighborhood Council voted this week to ask the city to rename a portion of Dudley Street to Chuck Turner Way in honor of the former city councilor, who died last month.

The proposed renamed street would run from Malcolm X Boulevard and Shawmut Avenue to Washington Street - past the building where Turner had his neighborhood office - in Nubian Square.

City Councilor Kim Janey reports that Chuck Turner, who once held the District 7 seat she now does, died today:

Councilor would exempt Chuck Turner, other residents over 60 from having to clear their sidewalks of snow

City Councilor Tito Jackson (Roxbury) wants to exempt Boston homeowners over 60 and people with disabilities from the requirement to shovel their sidewalks after snowstorms.

In a request for a hearing that will go before the council tomorrow, Jackson says: Read more. 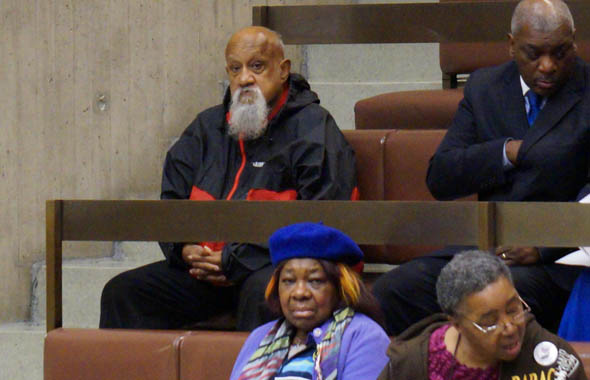 Among those who attended to support Yancey: Former Councilor Chuck Turner

The City Council today approved a proposal to spend $120 million to build a new high school in Mattapan, for which Councilor Charles Yancey (Dorchester) has been fighting for close to two decades.

The proposed borrowing for the work will require a second council vote in two weeks and approval by Mayor Walsh.

The Gazette adds Turner is now also blogging, at Chuck Turner Analysis, where he focuses on national economics through a Boston lens:

Turner had sought a new trial on the extortion charge - related to a $1,000 payment from a Roxbury businessman. Although Turner did not appeal his three perjury convictions, he argued his overall three-year prison sentence - only six months less than former state Sen. Dianne Wilkerson, who pleaded guilty to more charges - was based on vindictiveness by prosecutors over his pre-sentencing allegations of racism.

Court: City council had no right to remove Chuck Turner from office before he was sentenced

In a moral, if not practical, victory for Chuck Turner, the Supreme Judicial Court ruled today that while the Boston City Council has the right to pass rules on the fitness of members, it went too far in kicking the convicted Roxbury councilor out after he was convicted but before he got his three-year federal extortion sentence.

Moot point? Supreme Judicial Court to consider Chuck Turner's ouster before he was sentenced for taking a bribe

The Supreme Judicial Court next week hears arguments from the lawyer for convicted felon Chuck Turner and the city of Boston on the way the city council ousted Turner after he was convicted in 2010 but before he was sentenced.

In Roxbury, out with the old, in with the new

Why the feds never got beyond Dianne Wilkerson and Chuck Turner

CommonWealth takes a look at Ron Wilburn's grand jury testimony (with transcript provided), discovers the Cooperating Witness proved unable to deliver the goods on anybody else involved in liquor-licensing issues in Boston and the feds, so far, have either failed to follow up or decided there just was no there there.

Judge to Chuck Turner: You're being replaced

The Globe reports a federal judge has rejected ex-Councilor Turner's effort to block the Feb. 15 and March 15 elections to replace him.

Outside the federal courthouse yesterday

This pro-Chuck Turner video makes the argument that Boston's just a racist hellhole, but does include US Attorney Carmen Ortiz's post-sentencing comments (starts around 2:20):

The Dorchester Reporter reports on Turner's sentence for accepting a bribe and then lying about it to the FBI.

That's only six months less than Dianne Wilkerson got for accepting more money after a career filled with criminal and disciplinary issues, but unlike Wilkerson, Turner didn't plead guilty and never expressed remorse.

He's scheduled to turn himself in March 25; his lawyers promised an appeal.

If it stands, the sentence will render Turner's suit to get his council job back moot, since state law calls for booting elected officials sentenced to prison.

City Councilor Mike Ross, who presided over Turner's expulsion hearing in December said in a statement:

This is a sad day for all of us. Chuck was a colleague of mine for a decade. My thoughts are with Chuck and his family as they process the sentence handed down this afternoon.

Chuck Turner has a fan club across the river

The Herald reports on some "ragin' grannies" serenading the ex-city councilor in Cambridge:

The Boston City Council says its vote to boot Chuck Turner doesn't violate his constitutional rights, so a federal judge should dismiss his lawsuit - which might become moot on Tuesday when he's sentenced on his federal corruption conviction.

"Candidacy and the right to hold office do not rise to the level of a fundamental right, the council argues in a brief submitted Friday to the federal judge hearing the suit by Turner and some constituents to get his job back. Also, elective offices are not "property" subject to the 14th Amendment, the council argued.

Blackstonian reports from last night's forum for candidates seeking to replace Chuck Turner; also rates their performance and fact-checks some of their statements.

The Dorchester Reporter zeroes in on how the candidates feel about the legality of the City Council's vote to expel Turner.

The federal judge who will sentence Chuck Turner for his bribery and perjury charges has denied a request to postpone sentencing until at least March.

In an order issued last week, Judge Douglas Woodlock said it's simply too late for Turner to request anything just because he disagrees with one lawyer and wants counsel from another - who just happens to be on an extended overseas stay. Turner is scheduled for sentencing on Jan. 25 on his bribery and perjury convictions.

The Globe reports a federal judge isn't so sure the Boston City Council had the authority to boot Chuck Turner over his federal bribery/perjury convictions and wants the city to convince him by Friday - three days before another federal judge is scheduled to sentence Turner, which could make the whole thing moot if that judge puts Turner in prison, since state law requires the unseating of imprisoned officials.

Chuck Turner sues to get his job back

As promised/threatened, convicted ex-city Councilor Chuck Turner has filed a federal lawsuit demanding he be allowed back into the City Council chambers.

In his suit, co-filed with several constituents yesterday in US District Court in Boston, Turner charges the council violated his and their Constitutional rights against punishments enacted after the fact - in Turner's case, a council rule allowing for ousters that was passed after his indictment - and that the move leaves all of District 7 without an elected representative. Somewhat ironically for a man who once proposed gutting the First Amendment, Turner also charges the council violated his First Amendment rights.

The City Council set Feb.15 and March 15 as the dates for the preliminary and final elections to replace ousted felon Chuck Turner.