The T officially began service today on dedicated bus lanes that run down the center of Columbus Avenue between Egleston and Jackson Squares. The goal is to speed service on the routes that use Columbus - the 22, 29 and 44. The T is now looking at extending the dedicated lanes to Ruggles. 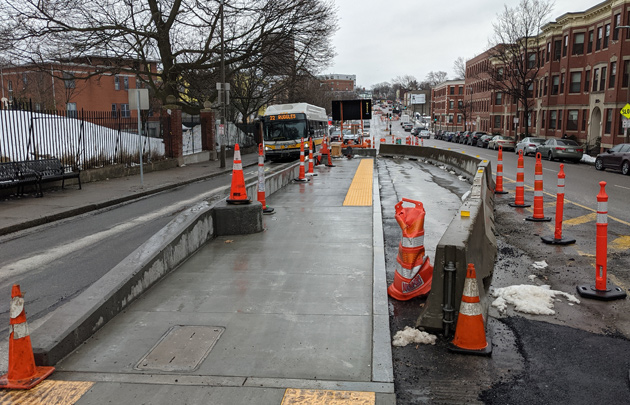 One day, that bus will zoom right down the middle of the avenue.

Construction crews have been busy in recent months building new bus stops between Egleston and Jackson squares for dedicated bus lanes and stops that planners say will mean a faster ride to and from Jackson Square and Ruggles on the 22, 29 and 44 bus routes. Read more.

DA: Man attacks bus driver who took pity on him and let him ride for free

A homeless man was arraigned on a variety of charges this week after he allegedly went nuts on a Route 22 driver who let him ride for free after the fare machine wouldn't accept his dollar bills, the Suffolk County District Attorney's office reports.

Donnell Flattes, 23, was charged with interfering with a bus driver, indecent assault and battery, possession of a Class D substance with intent to distribute, resisting arrest, and two counts each of assault and battery on a public employee and making threats to commit a crime for an incident on a bus on Talbot Avenue in Codman Square around 8 p.m. on Sunday, the DA's office says:

Police: Casanova strikes out with woman on bus, so he attacks bus driver instead

Transit Police report arresting Joel Casanova, 34, of Dorchester, on charges he attacked the driver of his 22 bus after a woman whose attentions he sought told him to leave her alone.

Police described the incident as the bus traveled north on Blue Hill Avenue near Columbia Road around 9:50 a.m. on Saturday: