Walsh: You come for the king, you best not criticize the Boston Resiliency Fund

Both Mayor Walsh and Police Commissioner William Gross today tore into elected city officials for their comments on, in Walsh's case, the Boston Resiliency Fund and, in Gross's case, what he said were BPD efforts to fight violent crime. Read more.

The president of the Boston Police Patrolmen's Association is accusing the Boston Teachers Union of helping to demonize cops and even endanger their lives by supporting a Black Lives Matters program that calls for hiring more black teachers and school counselors instead of school cops.

WGBH provides an overview of Mayor Walsh's annual state-of-the-city address, in which he called for $500 million of new affordable-housing construction and a fund to help renters below certain income levels pay their rent. Read more.

City Council President Andrea Campbell (Dorchester) is calling for a public hearing to help figure out why Boston residents - and especially those who live in Roxbury, Dorchester and Hyde Park - pay so much more for car insurance. Read more.

Jeff Durham of Codman Square says he's been certified for a spot on the fall ballot for the District 4 (Dorchester and Mattapan with small parts of Jamaica Plain and Roslindale) seat now held by City Council President Andrea Campbell. Read more.

City Council President Andrea Campbell (Dorchester) and other councilors say they're fed up with death and destruction on Boston streets caused by texting Massholes and other bad drivers, and want to look at new methods to stop them.

Among the possibilities raised by Campbell: Cameras mounted at key intersections and along major roadways that could catch and generate people barrelling through red lights and going way too fast. Read more.

The City Council today agreed to continue studying a proposal by Council President Andrea Campbell (Dorchester) to extend the right to vote in municipal elections to "immigrants with legal status." Read more.

The outrage of Codman Square residents who recently learned Popeyes was building an outlet where it had been denied permission two years ago could lead to new regulations that require companies to notify neighbors of even proposed projects that meet all zoning requirements. Read more.

The Dorchester Reporter reports on the non-race to succeed Councilor Michelle Wu (at large) as council president. Campbell will preside over council meetings and assign members to committees.

The Boston City Council voted unanimously today to tell the federal government to cut the nonsense and let Haitians here on "temporary protected status" visas stay here, because the awful conditions in their homeland that brought them here persist. Read more.

Councilors to consider violence in Boston at hearing in Roxbury

Thanks to @joshzakim & @PanMass for organizing a #CityHall spin class in the Council chamber. pic.twitter.com/oB4cu1Y1Mf 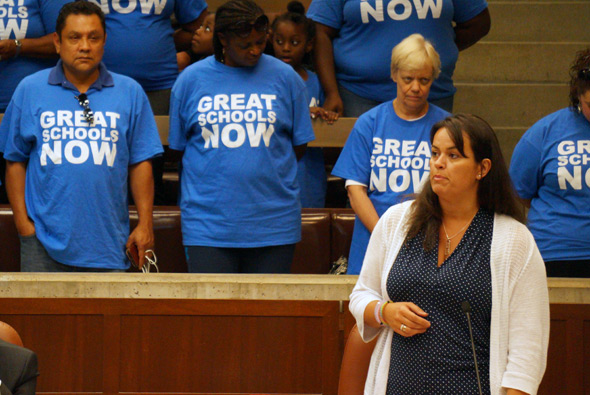 Anticipating voters will approve the recreational use of marijuana, city councilors voted today to ban pot shops and medicinal marijuana dispensaries from opening closer than a half mile to each other.

City Councilor Michael Flaherty (at large) had originally sought a one-mile restriction, but offered a half mile as a compromise. Read more.

Some councilors extol benefits of new property tax; at least one, however, says enough's enough

City Councilors Andrea Campbell (Roxbury) and Michael Flaherty (at large), say that for an average of about $23 per resident a year, Boston would be able to build more housing for people being priced out of the city - and help upgrade city parks and historic sites. Councilor Bill Linehan, however, is not sure he buys it. Read more.