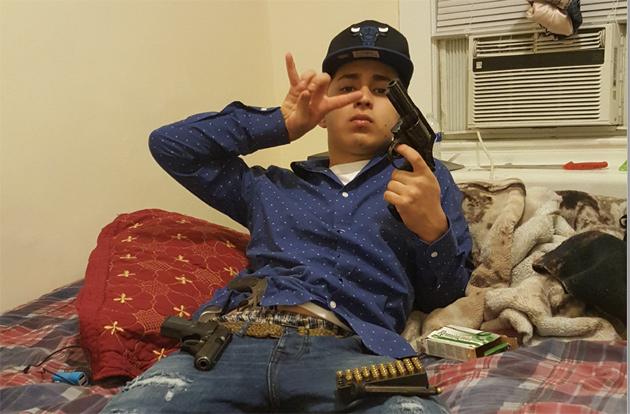 Not directly implicated in any of the murders that led to the arrests of dozens of local MS-13 members in 2016, and deemed too young to be indicted with his homeboys, Cristian "Duende" Alvarez Hernandez was turned over to Immigration for return to his native El Salvador. Read more.

The knife Gonzalez plunged into Martinez, recovered from the water off Constitution Beach.

A judge today sentenced MS-13 member Edwin "Sangriento" Gonzalez to life in federal prison for helping to butcher one teen on Constitution Beach in 2015 and a second teen five months later on Falcon Street because he thought they were members of a rival gang, the US Attorney's office reports.

A federal judge today sentenced Carlos "Chuchito" Melara, 21 and a Salvadoran national, to 35 years in prison for fatally and repeatedly stabbing a 15-year-old on Constitution Beach in East Boston in 2015 - along with three other gang members - the US Attorney's office reports.

A member of an Everett MS-13 "clique" pleaded guilty Friday to helping to catfish a 15-year-old to Constitution Beach in East Boston so that he and other gang members could beat and stab him to death in 2015 as part of an MS-13 war on a rival gang.
Read more.

A Salvadoran national living in East Boston admitted in federal court yesterday that, as a national MS-13 leader, he ordered the deaths of Wilson Martinez, 15, and Cristofer Perez de la Cruz, 16.

Henry Josue "Street Danger" Parada Martinez, 22, pleaded guilty yesterday to racketeering charges that include the murder of Wilson Martinez, 15, whose body, stabbed repeatedly, was found on Constitution Beach on Sept. 7, 2015, the US Attorney's office reports.

Oscar "Demente" Moran, arrested in January, 2016 as part of a local crackdown on the MS-13 gang, is now formally charged with ordering the murders of Wilson Martinez, 15, and Cristofer Perez de la Cruz, 16.

Murdered teen's fate was sealed the month before at national gang conclave in Virginia, feds say

The 64-page federal indictment against alleged local members of the murdering, drug-running MS-13 provides some details on the gang-war murders of three teenagers in East Boston between September and January: Two were killed by gang members looking for promotions by proving they could murder somebody while the third died because gang leaders had decided at a meeting to step up its wars with rivals across the eastern US. Read more.

A man whose body was found on Constitution Beach in East Boston this morning was apparently stabbed to death, the Suffolk County District Attorney's office reports.

A passerby found the man's body along the water near the East Boston Yacht Club around 8 a.m., the DA's office says.

The deceased has not yet been identified. He had injuries consistent with stab wounds, but the Office of the Chief Medical Examiner will determine the cause and manner of his death.