The Massachusetts College of Pharmacy and Health Sciences announced this afternoon that it's moving to online-only classes on March 22.

Jonathan Chavez, 22, of Mission Hill, had bail set at $200,000 yesterday at his arraignment for an armed home invasion at 11 Sunset Dr. this past Sunday that has left two MCPHS University students in critical condition. Read more. 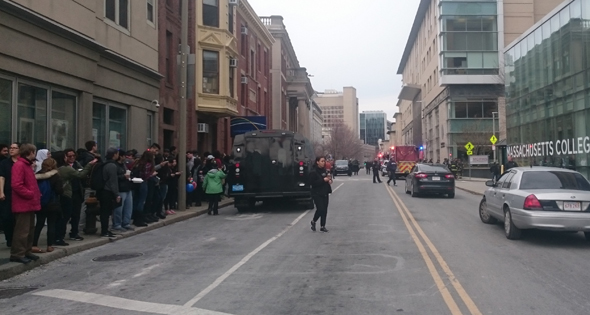 A normally bustling Longwood Avenue shut down, people ordered to other side. Photo by Matt Colvin.

Police emptied MCPHS University and MassArt buildings at Longwood Avenue near Huntington and put the nearby Boston Latin School in "safe mode" around 11:30 a.m. as the bomb squad investigated a suspicious package inside.

Shortly after 11:50 a.m., bomb technicians determined the package was not harmful. The university began letting students back in and Boston Latin came out of safe mode.

The scene on Palace Road (photo by Kyle): Read more.