The Supreme Judicial Court today upheld Dwayne Moore's conviction for murdering four people - including a toddler - and permanently paralyzing a fifth person in what became known as the Mattapan Massacre on Woolson Street in Mattapan early on Sept 28, 2010. Read more.

A man who narrowly escaped death himself the week after his sister and her young son were murdered in 2010 was identified as Boston's latest murder victim.

Kimani Washington was sentenced today for his part in the armed robbery that took place before four adults and a toddler were taken outside and shot to death, four of them fatally, on Sept. 28, 2010, the Suffolk County District Attorney's office reports.

Washington's sentencing came after he pleaded guilty to charges of home invasion, armed robbery, armed carjacking, unlawful possession of a firearm, trafficking in a Class B substance, and possession of a Class D substance. The DA's office says Washington, who was facing two assault-and-battery charges at the time, left Woolson Street before the massacre.

The Globe's Brian Ballou tweets. Dwayne Moore will be formally sentenced to life without parole tomorrow for the deaths of three adults and a toddler on Woolson Street in Mattapan in 2010.

A Suffolk Superior Court judge today agreed with Dwayne Moore that it might be difficult for him to get a jury of unbiased peers in Suffolk County for his retrial on charges of slaughtering three adults and a toddler in 2010.

Eddie Washington supplied the guns and the getaway car, then helped corral the four people who would wind up dead on Woolson Street, a prosecutor charged at his arraignment this morning.

Suffolk County Assistant District Attorney Edmond Zabin did not say whether Washington actually joined Dwayne Moore in spraying five victims - four of whom died - with gunfire. However, it may not matter, because Zabin laid out a case in which Washington could be charged with first-degree murder under the "joint venture" doctrine, which could hold him as guilty as if he had pulled the trigger.

Authorities today announced the arrest of a second man on murder charges for the deaths of three adults and a child on Woolson Street in Mattapan on Sept. 28.

What began as a simple robbery of a drug-dealing ex-roommate ended with three adults and one child dead on a Mattapan street and a fifth person clinging to life in the hospital, a Suffolk County prosecutor said this morning.

Dwayne Moore, 33, was formally charged this morning with four counts of murder for the people found dead on Woolson Street on Sept. 28. He pleaded not guilty and was ordered held without bail at his arraignment this morning in Dorchester District Court. He is next scheduled for a Dec. 22 court hearing.

Dwayne Moore, 33, of Mattapan, was arrested today for the Sept. 28 murders of three adults and one child on Woolson Street in Mattapan, Boston Police and the Suffolk County District Attorney's office announced.

Police and prosecutors said they could not comment further because a Suffolk County grand jury is currently investigating the crimes.

Andrew Flonory, 25, of Brockton, was shot multiple times as he sat waiting for a bus at Ashmont station on July 23.

At the time, Wicked Local Brockton reported Flonory was waiting for a Brockton Area Transit bus around 11 p.m. when "two men on bicycles approached him, one of them toting a weapon" and opened fire. Flonory was taken to Boston Medical Center for treatment of gunshot wounds to his arms, chest and back.

What kind of moron gets out of a car just used in one of the city's worst multiple murders, then hangs around it for a couple hours?

Boston Police Commissioner Ed Davis said today that homicide detectives actually had Kimani Washington in for questioning just a couple hours after Tuesday's quadruple murder - because one cop noticed him skulking around what turned out to be the getaway car at Blue Hill Avenue and Warren Street - and that Washignton even admitted being in the car and handed over the key.

First arrest made in connection with Mattapan murders

Manchester Police report Kimani Washington was arrested without incident around 6 p.m. at an apartment complex right off an I-93 interchange.

Boston Police records show that Washington, who lives at 45 Fowler St., was arrested twice this year on charges of assault and battery, first for an incident May 26 at 71 Kingsdale St. in Dorchester and then on July 26 for an incident at 95 Fowler St. 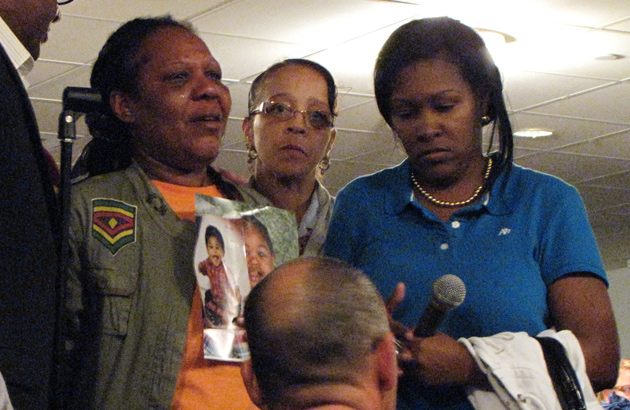 Amanihotep Smith was one of the four people gunned down on Woolson Street in Mattapan this morning. His grandmother briefly held up photos of the 2-year-old at a community meeting at Morning Star Baptist Church on the murders before she broke down in tears and was ushered out by ministers and social workers trying to comfort her. Amanihotep died in the arms of his mother, Eyanna Flonory, 21, of Dorchester, who was also shot to death.

Five shot, four dead in Mattapan, including a toddler

Woolson Street turned into a grisly scene around 1 a.m.; one of the victims is a toddler, Channel 5 reports. Police are looking for a silver or gray Ford Explorer.