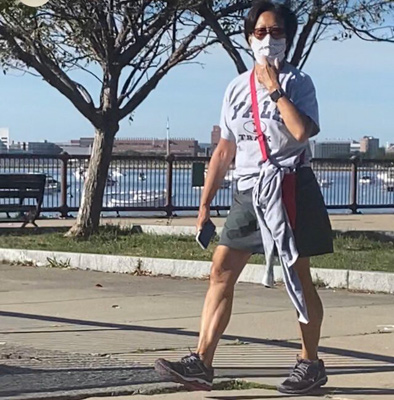 Somebody called 911 this morning when a woman who said she was with WCVB began going up to the unmasked and asking why and videoing them with her camera. One person took exception and snapped her right back and then posted about "this lady [who] says she works for channel 5 and is provoking citizens." Read more.

Local airwaves down to just one Janet Wu again

New England One reports that WHDH's Janet Wu has left the station, leaving WCVB's Janet Wu our only on-air Janet Wu. Channel 7's Wu will continue teaching at Emerson, but has started doing some reporting for a New York station.

Did the Herald blow Martha Coakley's response to an inane question completely out of context?

At Blue Mass. Group, David Kravits makes the case. At issue: What Coakley said in response to some question by Janet Wu on Channel 5's new political show. Speaking of which, KennedySeat.com wonders when the adults will show up on the show:

... In the three episodes of this show I have watched (I skipped Christy), I have continually been struck by how the guests just run circles around the hosts, who are clearly overmatched. Even Pagliuca, who is a neophyte in the political world, handled the Channel 5 team easily. ...

This is what Channel 5's investigative team has been reduced to: Janet Wu wandering around Boston like some crazed pediatrician with a throat-culture Q-tip, rubbing random objects in random public places (such as a single crossing button at a single, unidentified crosswalk) and having a lab determine whether they have bacteria on them.

Guess what? They do! Alas, Janet can't tell us if these are KILLER GERMS because she apparently spent so much on the swab sticks that Channel 5 refused to pay for real testing. But you never know:

This just in! Two of the people who were involved in that December car accident with Cambridge city councilor and would-be state senator Anthony Galluccio did not contact Channel 5 reporter Janet Wu to tip her off about the accident. Repeat, they did not call Wu first.

I know, let the full implications of that sink in for a moment. Besides, as the Alewife, which breathlessly reports this fact, adds: Developing...