Tracey Staedter inspected the barricades along the Marathon route this morning.

Meanwhile, the city alerts us:

Meters are free and time limits are not in effect, but all other parking rules remain in effect.

What's a patriot have to do to get a cab in this town?

Patty Neal reports these Minutemen were having trouble finding a cab today.

In 1939, three years after he had bested local favorite Johnny Kelly - barefoot, and with a burst of speed at the top of what is now Heartbreak Hill - Ellison "Tarzan" Jones won his second Boston Marathon.

William Dawes rides off to sound the alert

Paul Revere gets all the glory, but William Dawes also rode into the countryside that fateful April night to warn the colonists that the Redcoats were coming.

This morning, the National Lancers re-created Dawes' ride from the First Church in Roxbury in Eliot Square.

Reading a poem about Dawes on the front steps of the church:

Listen my children, and you shall hear, of the midnight tweets of Paul Revere

Starting at 8, the Paul Revere House will be "livetweeting" Paul Revere's ride.

Alas, poor Dawes, never gets as much credit.

RT if by land, Favorite if by sea.

No, a Lexington minister did not say there was 'no king but Jesus' just before before the shot heard 'round the world

J.L. Bell fires grapeshot at the notion that the Battle of Lexington supposedly started with a verbal volley in which a Redcoat commander demanded the Minutemen put down their arms in the name of George III, the sovereign king of England and a minster retorted that "We recognize no Sovereign but God and no King but Jesus."

Besides the fact that none of the dozens of participants in the battle who wrote down their recollections of it ever mentioned the alleged exchange, the minister who allegedly made the retort wasn't even on the Lexington Common that morning.

Backpacks, strollers will be allowed along Marathon route, but police would prefer if you didn't bring them

Boston officials today outlined some of their security measures for the April 21 Marathon that include road closings, more cameras and police and more cots and emergency personnel for the larger number of runners expected.

"Our goal is to make it a safe family day," Police Commissioner William Evans said. "I'm very confident we're going to have a great day."

Remembering the patriots in Patriots Day

Calendar of Patriots Day events - some this weekend. The list is, however, missing the annual re-enactment of the rides of Paul Revere and William Dawes.

Last Boston Marathon for the Hoyts

Forget the backpacks at the Marathon

Also, no baby strollers along the route. Bring stuff in clear plastic bags.

Meanwhile, some Watertown residents want better answers on the search for the Tsarnaevs after last year's bombings.

In April, Marathon runners will pass 26 miles of daffodils

The Daily Free Press reports on the final planting of memorial bulbs in Kenmore Square on Saturday. 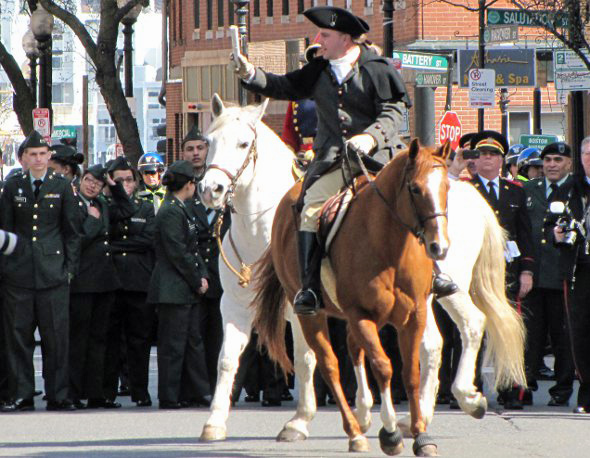 Paul Revere hoofed it out of the North End this morning to warn the colonists the Redcoats were coming.

Afterwards, Minutemen stood at attention in front of the Paul Revere statue and Old North Church as Taps were played and a wreath laid at a memorial for fallen patriots on the Prado.

The Patriots Day parade in Arlington was fun, but it didn't really have a lot of Minutemen - way more Shriners, in fact (and a troop of Civil War re-enactors, um, what?).

Just in time for Patriots Day, the BPL has posted Marathon photos by Leslie Jones, including the immortal Johnny Kelley finishing the race second in 1940 and on the way to his first-place finish in 1945 (on far right; in Natick Center, ye ed thinks):

Mikesssss photographed the annual midnight bike ride along the Marathon route. Later, Photographynatalia photographed some of the survivors runners:

Paul Keleher watched the Marathon near the Newton/Wellesley line. He captured both the women's leaders (winner Sharon Cherop was fifth at that point) and the men (winner Wesley Korir was fourth):