Although like the original Boston 2024, it's kind of a failure - after getting you all hyped up about the idea of renting dumpsters, it doesn't tell you how to contact whoever's behind it for more info.

File under "Dodged a Bullet," perhaps? The Los Angeles Times recently reported the Olympics that LA is getting - in 2028 - are now expected to cost $700 million more than the previous estimates.

This week marks the third time in three years that organizers have revised their expenses upward.

Globe to Bostonians: It's not too late for you morons to do the right thing

When did Shirley Leung get on the Globe editorial board? The Editorial We at our Paper of Record wakes up from a long slumber and sighs and tut-tuts today that we lost the Olympics, but says it's not too late for us to learn from our stupid, pitiful yahoo mistake in turning our noses up at the Opportunity of a Lifetime: Read more.

No, our Olympic dreams didn't collapse because Bostonians are timid little tightwads

Some Globe columnist who isn't Shirley Leung took the time last week to wail about how we coulda been a world-class contenda, if only we weren't such penurious little bastards too scared to dream and spend big.

Not quite, as Evan Falchuk reminds us: Read more.

The BBC reports the referendum leaves Los Angeles and three European cities in the running.

The Globe and Mail reports public officials don't want be be put at risk for costs and private companies aren't keen on ponying up money, either.

The governor's office today released the Brattle Group report on financial implications of holding the 2024 Olympics here. And what the Brattle Group found was that Boston 2024 dramatically underestimated the costs of certain facilities and that the much vaunted "deadline" effect for forcing infrastructure improvements could have meant even higher costs as contractors demanded extra payments to build everything on time. Read more.

Associated Press reports the guy says Boston failed to deliver on the "promises" it made.

The Globe reports Mayor Walsh began realizing he might have to kill the bid about three weeks ago.

WBUR says yeah, we could still get something out of all that planning.

This just in from Emily Rooney:

The sun still rises over an un-Olympic town

So what happened in Boston, and what next? A roundup of some Olympic thoughts:

Jon Keller says this is the Market Basket story all over again - the 1% once more was tone deaf: Read more.

Our resident scold opens the throttle

No, not Shank - he claims to be happy. We're referring, of course, to Shirley Leung, whose post-Olympics column is petulant, exasperated, cranky. We can almost picture her, head down on the bar as she orders up another shot and complains about those ungrateful wretches she's forced to share an area code with.

Get out the butter: Boston Olympics are toast

Mayor Walsh said this morning he will not agree to sign the "host city contract" without assurances that Boston will not be liable for any possible cost overruns. And if the USOC says he has to agree to a contract today even though it won't be available until September, "then Boston is no longer pursuing the 2024 Olympic and paralympic games." Read more. 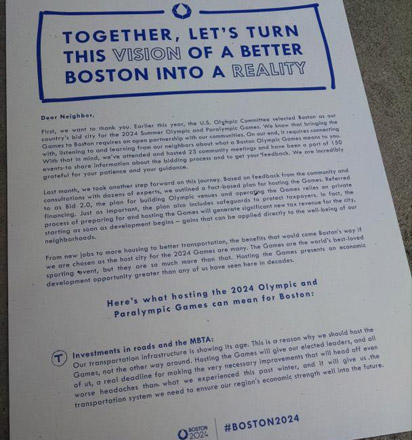 Steve reports finding a two-page leaflet on his front steps in South Boston yesterday from Boston 2024, extolling its new "fact-based plan for hosting the games" that will, of course, fix the T, create thousands of new jobs and housing units, lead to better bike lanes and mean more taxes for the city. Read more. 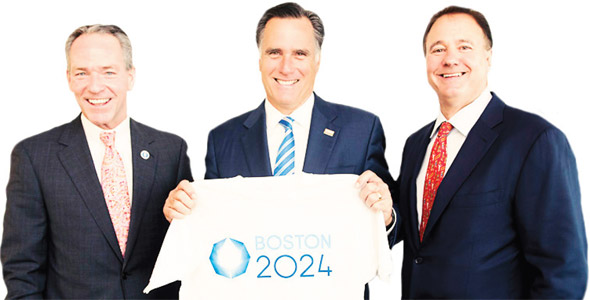 Fish, Romney and Pagliuca, from the Political chapter.

Boston 2024 today released the two previously withheld chapters of its initial bid documents that won us the right to compete for the 2024 Olympics.

Although Boston 2024 has repeatedly said - as recently as last night - that the games will be profitable - the previously secret Bid and Games Budget document said that would happen only after first plugging a sizable budget hole: Read more.

Boston 2024 head Steve Pagliuca opened an Olympic debate tonight by saying the group would release the financial and political parts of the initial bid tomorrow, rather than next week.

Boston 2024 details insurance plan; but what if stadium developer pulls a Filene's Hole?

Boston 2024 today released details of its plans to spend more than $100 million on insurance to cover the risks of a hurricane hitting Boston during the Olympics, terrorists striking the games, sponsors dropping out, ticket sales proving disappointing or entire countries boycotting the games. Read more.

This statement just in from Mayor Walsh:

The question of releasing the original bid documents has become an unnecessary distraction in what should be a constructive civil discourse about the future of the City of Boston. It's important that we continue our focus on building a concrete and sound plan that is shaped by community input and brings long-term benefits to the City of Boston and its residents. As a result, I asked Boston 2024 to provide the original bid, in its entirety, for public review. Both Boston 2024 and the United States Olympic Committee fully support the release of these documents in order to maintain an open and transparent process.

The chapters, from Boston 2024's original bid to the US Olympic Committee, involve the financing and political support for the proposed 2024 games.

And when the mayor talks, Boston 2024 listens, unlike when mere city councilors talk.

City Council President Bill Linehan today blocked a vote to force Boston 2024 officials to show up with secret documents related to Olympic financing - until at least the council's next regularly scheduled meeting on Aug. 12. Read more.

The City Council tomorrow is scheduled to consider Councilor Tito Jackson's request to force Boston 2024 officials to show up with a copy of two chapters of their original Olympic bid that they don't want anybody to see. Read more.