This statement just in from Mayor Walsh:

The question of releasing the original bid documents has become an unnecessary distraction in what should be a constructive civil discourse about the future of the City of Boston. It's important that we continue our focus on building a concrete and sound plan that is shaped by community input and brings long-term benefits to the City of Boston and its residents. As a result, I asked Boston 2024 to provide the original bid, in its entirety, for public review. Both Boston 2024 and the United States Olympic Committee fully support the release of these documents in order to maintain an open and transparent process.

The chapters, from Boston 2024's original bid to the US Olympic Committee, involve the financing and political support for the proposed 2024 games.

And when the mayor talks, Boston 2024 listens, unlike when mere city councilors talk.

City Council President Bill Linehan today blocked a vote to force Boston 2024 officials to show up with secret documents related to Olympic financing - until at least the council's next regularly scheduled meeting on Aug. 12. Read more.

The City Council tomorrow is scheduled to consider Councilor Tito Jackson's request to force Boston 2024 officials to show up with a copy of two chapters of their original Olympic bid that they don't want anybody to see. Read more.

Charles Yancey has thoughts about the Olympics, but won't tell us what they are just yet

Boston 2024!! Huge topic for Boston. However I will post my response on the relaunch of my website #ComingSoon Very Soon #YanceytakesTwitter

Here in the UHub newsroom, of course, we can hardly wait. Maybe he'll also explain why he suddenly dropped his 20-year campaign for a high school in Mattapan when he finally had at least a 9-4 majority on the council last fall.

Council could consider demand for Boston 2024 financial and political documents 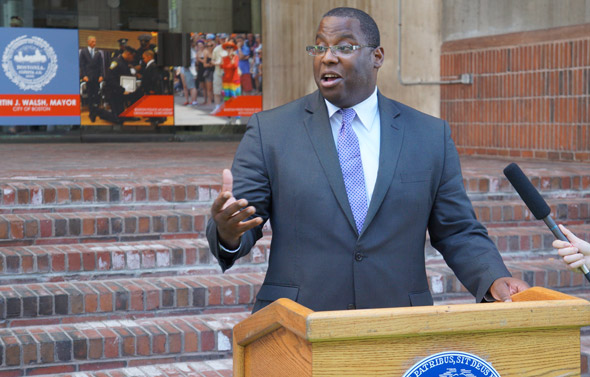 City Councilor Tito Jackson (Roxbury) this morning filed his formal request to ask fellow councilors to order Boston 2024 to hand over two private chapters of its Olympic bid that relate to finances and political support of the proposed games.

City Councilor Tito Jackson gave Boston 2024 until Friday to give him the 100% unredacted version of its "Bid 1.0" for the 2024 Olympics. On Friday, Boston 2024 sent the Roxbury city councilor a note saying, in essence, sorry, Tito, no can do, there's proprietary stuff in there, but we can show you the Bid 2.0 stuff, and it's even better.

Jackson, who has latched onto the fact that one of the few actual powers the City Council has is that of subpoenaing people, has scheduled a press conference for 10 a.m. Monday to discuss what his next steps are in getting the docs that may or may not have committed Boston to something.

Pan-American Games Land With a Thud in an Indifferent Toronto

The reports our neighbors to the north are not all that enthused about the Pan-Am games.
The Pan-Am games are sort of a tryout in an effort to host the Olympics. The reaction of Torontonians is telling.

Mayor John Tory is so exasperated that he has taken to lecturing them about their attitude.

Not much change in Olympic polling numbers

WBUR reports the numbers from its latest Olympic polling in the Boston area and across the state.

An Olympic poll going around

Kevin McCrea reports on a polling call he got last night. "They did not identify who they were from but clearly were paid by Boston 2024. They asked 13 (!) questions to garner a lot of information about potential supporters/opposers of the Olympics." Read more. 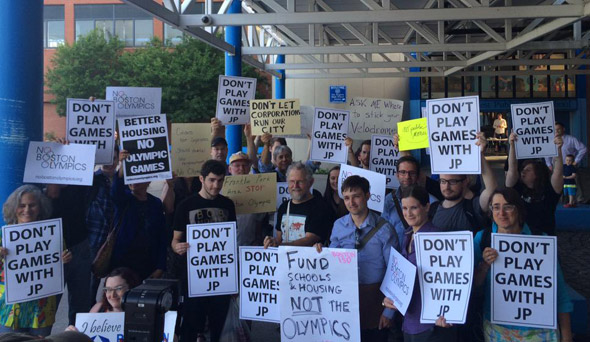 Protesters gathered before the meeting.

The day after Boston 2024 announced their revised plans, organizers of a city forum on the games tried a new approach in Jamaica Plain: Splitting the meeting into three parts, to discuss different ramifications of the would-be games.

"They're separating us to take away our voice!" some protesters yelled at the English High School session, not far from Franklin Park, which remains the proposed venue for equestrian events and the pentathlon. Read more.

Boston 2024 plans call for massive Widett Circle redevelopment even if we don't get the Olympics, plus tax breaks for the developer

Boston 2024's "2.0" plan for Widett Circle calls for tearing down all the existing industrial and mass-transit facilities in the 83-acre area and turning it into 8 million square feet of office and residential use with the hope Boston gets the Olympics, but under a plan that would continue even if we don't get the games. Read more.

2024 Olympics plan still calls for taking Widett Circle, building stadium, turning it over to a developer

Boston 2024 officials are outlining their "Bid 2.0" version of the proposed 2024 Olympics in Massachusetts. Current Boston 2024 Chairman Steve Pagliuca says the plan still calls for buying out the existing businesses in Widett Circle and building a temporary stadium there - and then turning the land after the games over to a private developer, who would build a whole new transit-oriented development with 4,000 apartments. Read more.

At the South Boston convention center. If you can't break away from work, you'll supposedly be able to watch it live online.

We'll have to wait until next week to hear any new information about the financials for the proposed 2024 Olympics. The City Council Special Committee on the 2024 Olympics held a hearing today about venue selection and financing but it didn't get many answers. Read more.

Lynch: Forget about building an Olympic stadium in Widett Circle

Steve Lynch (D-South Boston) went on NECN's Broadside tonight and told host Sue O'Connell that condemning the existing businesses at Widett Circle for a temporary 60,.000-seat stadium is stupid and something he'll fight. Suffolk Downs might work, he says.

"I don't think you'll build a stadium for three weeks and then take it down," he said. "I really think it's a bad idea."

Forget about subway-like service on the Fairmount Line; another blow to Olympics plan

The Herald reports the Baker administration has stopped plans to buy "diesel multiple unit" trains that would have allowed the Fairmount Line to run at subway-like frequencies, saying now's not the time to load up on new technologies on the T. Read more.

DMUs are passenger coaches with their own diesel engines, which can be more easily assembled into smaller trains at non-peak hours; the Patrick administration had touted them as a way to improve service on the line - and also to serve the proposed West Station stop in Allston on the Worcester Line and connect Back Bay with the South Boston convention center.

The Dorchester Reporter reports organizers are considering hiring a single company to handle all the land purchases and venue development should Boston get the 2024 games.

The Dorchester Reporter reports Boston 2024 wants to shift tennis from its original location at Harvard to Harambee Park, conveniently located near a Fairmount Line stop.

Reading is fundamental - except when it comes to Olympic bid documents