Boston Police report arresting a 17-year-old they say was the leader of a group of teens preying on taxi and Uber drivers in recent weeks. Read more.

The Globe reports on an order issued by a federal judge yesterday that gives the city six months to revise its car-for-hire rules - and that if it wants to continue treating services such as Uber and Lyft differently, it it better be prepared to show some really good reasons.

Uber driver gets probation for putting hands on woman passenger

A judge sentenced Abderrahim Dakiri, 34, of East Boston, to two years of probation after finding him guilty of assault and battery for a 2015 incident involving a passenger in his Uber car, the Suffolk County District Attorney's office reports. Read more.

Boston cabbies now have to get fingerprinted

All 6,000 of them under a new Boston Police regulation. What about Uber and Lyft drivers? They're not cabbies, so exempt from any BPD regulations, but the Globe reports legislation on Beacon Hill would require those drivers to get fingerprinted as well.

I've lost sleep trying to figure out what cost me 0.1 #uber pic.twitter.com/sh7UzWhn8d

Boston Magazine braces us for today's State House hearing on regulating ride-hailing service such as Uber and Lyft.

The perils of being an Uber driver: When your passengers become assholes and piss off the occupants of another car - who have a BB gun

Arlington Police report they are looking for the occupants of an SUV who apparently reacted to verbal abuse from passengers in an Uber car by shooting out the car's rear windshield with a BB gun.

Police say the action started around midnight in the rear seat of an Uber driver's 2007 Saturn Vue: Read more.

Cambridge cabbies go on strike; shut down one side of Mass. Ave. Bridge 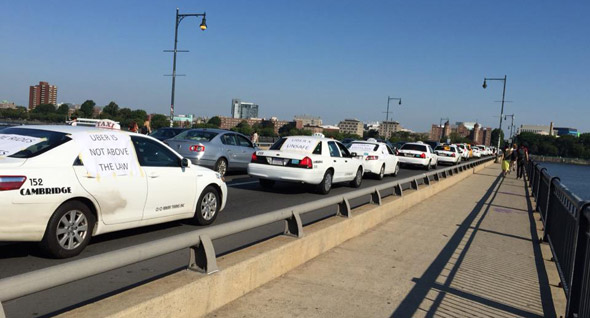 WBUR reports Gov. Baker has submitted legislation that would require both background checks and minimum insurance levels for people who drive for services such as Uber and Lyft.

A Suffolk County grand jury today indicted Michael Doherty, 41, of South Boston on assault-and-battery and civil-rights charges for an incident in January in which he allegedly used a racial epithet while attacking an Uber driver he claimed had brought him to the wrong address.

Line of the times 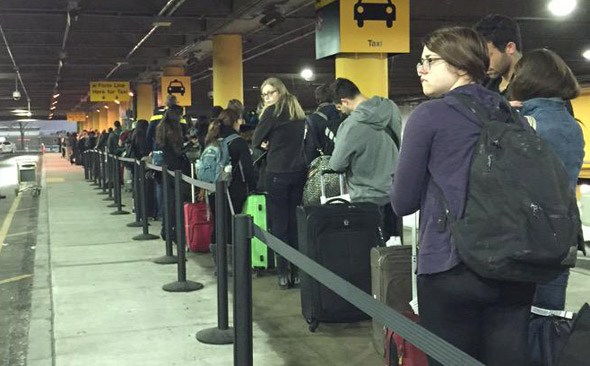 As she waited at 1 a.m. today in this long cab line at Logan, Rachael Ringenberg wondered:

Mary Moore writes she had actually been proud to have never taken an Uber car.

My patience ended this morning, when I stood on the street for 20 minutes in temperatures that hovered in the teens, waiting for a taxi that I'd ordered the night before.

Boston Police report arresting an Uber driver they say indecently assaulted a passenger after he dropped off three of her friends early Sunday.

According to a new study (warning, PDF) released by Uber, yesterday, its Boston drivers - of which it estimates there are now 10,000 - are earning an average of $19 per hour, ~33-percent more than area taxi drivers and chauffeurs.

The study came under immediate criticism because its research was co-conducted in-house by John Hall, Uber Technologies' "Head of Policy Research", so, yeah, he had a conflict of interest. He has a doctorate from Harvard University, though, so there's that.

Boston cab owners say city and state are driving them to ruin; sue over non-regulation of Uber and its ilk

Heavily regulated Boston cab owners last week filed a federal lawsuit against city and state regulators they charge have put them at a competitive disadvantage by letting Uber, Lyft and similar concerns steal their business.

In their lawsuit, filed in US District Court, the Boston Taxi Owners Association and two individual medallion owners charge the city is ruining their investments in expensive medallions by letting ride-share or "transportation network companies" pick up passengers for hire without any similar investment.

An off-duty Boston cop charged with beating an Uber driver was arraigned today on two counts of assault and battery, violating the civil rights of the driver and a man who came to his aid, assault and use of a motor vehicle without authority, the Suffolk County District Attorney's office reports.

Boston Police report a 16-year officer is facing assault and battery charges - after he allegedly beat an Uber driver he accused of taking him to the wrong address and then drove off in the man's car.

The Salem News reports the city's mayor has drafted regulations that could make it difficult for the rideshare service to keep sharing rides there.

NECN reports the driver, who picked up a woman on Tremont Street in Boston, was arraigned in Cambridge District Court in connection with a Dec. 6 incident.

State legislators to look at regulating Uber, Lyft and their ilk

WBUR reports how state legislator are jumping on the ride-share regulation bandwagon started by the Boston City Council.