The ugliest building in Boston 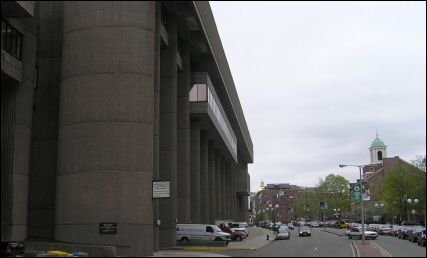 The state Department of Mental Health's Hurley Building was designed in the same "brutalist" mode as the nearby City Hall. But City Hall is a delightful little confectionary compared to this truly brutal, depressing series of concrete fists smashing the spirit of onlookers into a thin pulp. Elephantine concrete columns follow one after another, with no visual relief, figuratively pounding you in the head without stop. Dynamite would be too kind for this monstrosity, which would be far better suited as the headquarters of the KGB circa 1965 than a building in the cradle of American liberty. It's especially depressing given its location across the street from the classic West Church and, for that matter, all of Beacon Hill.

I disagree. City Hall is worse, if only because it is so prominent, alone in that useless, empty, dirty plaza.

All the workers in City Hall should be fired, the building vacated, and then demolished. In its place, they should build a 20,000 square foot brick federal that looks like it might be old, and hire as many people as they want to work in that space. And in that space alone.

We would accomplish much good that way.

City Hall is just fine as a building. It has some truly great public areas and all-in-all serves its function quite efficiently. Unfortunately, it is a victim of bad lighting, unimaginative decor and lack of attention. It represents an era of a City that was trying to reinvent itself after years of being a dirty, crumbling backwater. It is much easier to write it off and say how ugly it is etc., than it is to look at what qualities the building has and the catalyst it was for this city's rebirth. It is the cornerstone of the New Boston and a building we should be very proud of.

the story my grandfather, a infinite font of Boston stories, told me about City Hall is that some team of famous architects were visiting Boston and came to look at City Hall. After studying its exterior for a while, one of them said, "Looks like the crate Faneuil Hall came in."

Sigh. I'd rather have the current city hall than something that says, "we give up, we're not creative enough to design good new architecture so we'll just try to make new stuff look like what worked 200 years ago." Even if this is in fact the case. Nobody writes music that sounds like Beethoven (1770-1827) today, why should we build buildings in the Federal style (1790-1830)?

And anyway, isn't anyone else sick to death of all the brick in this city?

Even worse than this building is the Government Center Garage, which turns Congress Street into a dark tunnel and cuts off the Bulfinch Triangle from the North End and the Quincy Market area.

We've gotten rid of the elevated Green Line, the elevated Orange Line, and I-93. Shouldn't this come down too?

...but where would you propose making a new one? There's really nowhere else in the area to put that many parking spaces. My agency has about 20 spots in that garage, and I don't know what else we could really do.

There was a great article about this building in Boston Magazine many years ago. Apparently construction was started and stopped several times, and never quite finished: some of the snaky exterior stairways on the Fleet Center side...don't actually go anywhere.

For a mental health building I don't know if that's creepy or it's performance art.

It was supposed to wrap around the entire huge block. Instead, the high-rise part was never built, and many years later the Brooke Courthouse was built on that part of the site instead.

It shows how, if you have to put up a massive edifice, to build something that looks inviting, at least from the front.

...there are some that don't go to an entrance, but as far as I know, they all at least have a good-sized landing at the top, so you can walk up the stairs and hang out in sort of a crow's nest. Others connect to walkways to another set of stairs. My clients who receive services over there have mentioned enjoying having so many places to walk around and hang out in such a small area. People also use the stairways to have somewhere to go and talk privately.

. . . among some state employees that the building was meant to look like the shape of Massachusetts when seen from above. A look at the sattelite image on google maps suggests that this is not so. The part that fronts Cambridge Street does look like Cape Cod (except that it's all turned around, extending west from the mainland, with Provincetown to the south of Hyannis), but the rest of the block, even with the Brooke Courthouse included, seems to reach only as far west as Framingham. So much for that.

There are some mighty fine examples of bad architecture in this city - made even worse by the fact that most of them are spitting distances from some of the most beautiful ones in the world. City Hall is a perfect example - look at its proximity to Beacon Hill and I rest my case. Outside of downtown I would say the BU School of Law is not only ugly - but its location is a beacon of blight on the Charles.
http://gallery.prwdot.org/boston_colleges_tour/IMG...

And a bit further up the Charles

Is that Harvard dorm that looks like it will crush you just for spite if you dare walk under it.

you mean this one, thanks again to prwood's photobank. :-)

Besides the Hideous Triangle of the Hurley, City Hall, and Government Center Garage, my other nominations:

Tremont-on-the-Common. Not just ugly, but also full of stupid philistines who tried to prevent the Opera House from reopening.

Church Park Apartments, across Mass. Ave. from the Christian Science Church. The rest of the Christian Science master plan turned out beautifully, but this building is a huge mistake. The retail stores in it struggle, because they are too far back from the sidewalk, behind and under an overhanging concrete canopy. You can't even see their signs clearly from the street.

Midtown Hotel, on Huntington Avenue, also across from the Christian Science Church. This suburban low-rise motel just doesn't belong in this densely populated neighborhood. Demolish it and replace it with more suitable mid-rises that match their neighbors in height and scale, and that relate to Huntington Avenue in some way.

I have to say that none of these buildings strikes me as being as offensive as the truly ugliest building in the Hub, the Jail by the Charles (the one by the Charles Mass General/Mass Eye and Ear stop on the Red Line), which in an incredible twist of fate, seems to be avoiding the wrecking ball. The developers of the new complex seem to be preserving this eyesore. I wonder if the people who used to inhabit it and work there ever expected this monstrosity occupying some of the best real estate in the city to be tenderly preserved, like a historic landmark.
I really don't mind the modern stuff. It's Boston's old architecture that's kept whether it deserves it or not that drives me crazy.

Problem of the hour: Red Line without power
We could call her Downtown Abby
DA: Party at downtown hotel with two men, four girls ended when one of the men accidentally shot one of the girls in the head
An early winter comes to Devonshire Street in New York
Citizen complaint of the day: Frickin' potheads on the Common
Not quite the waiting room in Beetlejuice, but ...