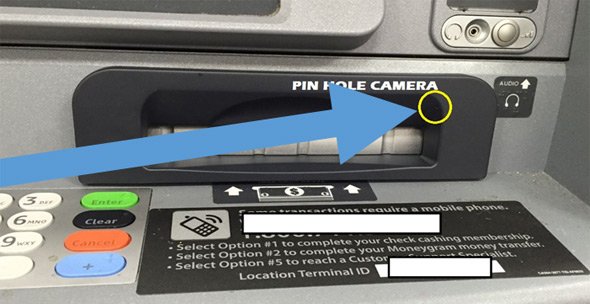 Cambridge Police report that on July 1, an alert consumer found an illegal card reader on an ATM at a convenience store in the city.

The device was attached with double-sided tape. The pinhole camera was located on a plate over the money dispenser area.

Skimmers typically include a pinhole camera with which to record a user's keystrokes as she punches in her PIN - as well as electronics to record the card's account number. They're slipped over an ATM - or gas pump - card slot and, if done well, can look like they're part of the ATM.

Cambridge Police say that because of the July 1 incident, officers on patrol will start checking ATMs at local convenience stores and gas stations to see if they've been surreptitiously added to.

Police say you should always examine a card slot before sliding your ATM or credit card in.

Be suspicious if you see anything loose, crooked, damaged or if you notice scratches or tape residue.

Also, block the keypad with your other hand while entering your PIN, try to use an ATM in an inside location and try to stay away from ATMs in tourist areas, which Cambridge has several of.

Neighborhoods:
Cambridge
Topics:
Crime
Ad:
Like the job UHub is doing? Consider a contribution. Thanks!

Appears blocked out in the photo but why won't CPD share the store location so possible ATM users can monitor their bank accounts? Or even narrow it to a neighborhood or street if they won't name the specific store?

I have reason to believe it was in the 7-11 store on the corner of Pleasant and Mass Ave. I work nearby and used the ATM there on 6/30. This past Sunday, several hundred dollars was withdrawn from my account at an atm in Boston, while I was at home all day with my atm card in my pocket.

The block party took place down there on 6/24 , and this store is right in the center of that block. That would mean there was significant risk to a potentially huge number of people, if it was indeed at that location. It irritates the hell out of me that they didn't name the store. If I'd known, I could at least have changed my pin before I was robbed.

Given that it says "PIN HOLE CAMERA" in big letters right on the thing, it's sort of your fault for falling for it.

In all seriousness, though, it's good to get into the habit of tugging on the various parts of an ATM to check for skimmers. From the smaller rigs like this, to larger units which overlay the entirety of the machine and will skim your card *and* record your PIN entry. Particularly when overseas, never, ever use a machine without giving it an inspection. Banks are generally good at spotting fraud so you're not likely to get burned, but even saving yourself the annoyance of having to go a week without your card while they send you a new one is worth the few seconds it takes to check.

Avoid all ATMs in places that aren't real banks. If you're in a city you are never more then a few blocks from a real ATM or at least a drug store where you can buy a stick of gum and get $40 back in cash if you pay with a debit card.

The little stand-alone ATMs are bad news. They can be reprogrammed and modified without the thief ever touching the surface of the machine. Do. Not. Trust.

Because they can't handle the new "chip" cards without very costly upgrades, most of these ATMs will be discarded in the next year or two.

My friend who had his identity stolen when he lost his wallet said that, when he called all his banks/card companies to cancel/reissue cards, he asked them all what to do to avoid fraud like this, and they all said variations of the same thing: use ATMs built into structures (i.e. nothing freestanding, that a couple of guys can pick up and move) that are associated with real banks you recognize, and ideally require a card to access.

Wish I could avoid them (without fees)

Don't know how common this is, but my credit union has an agreement with the Allpoint network and they're all the freestanding kind. I feel fairly comfortable - probably stupidly - using the ones at Target or Costco, but I hate using the ones in gas station convenience stores (on the rare occasion when I do).

Yes, Allpoint is the network

Yes, Allpoint is the network I have to use to avoid fees, and they are all located in CVS, Walgreens, some gas stations but are definitely not attached to banks. Would be good to know what kind of machine this hacked one was.

You think it says "PINHOLE

You think it says "PINHOLE CAMERA" in large friendly letters, in a different typeface, on the skimmer? I'm fairly sure that was added for clarity, like the big blue arrow.

I guess I wasn't obviously super-sarcastic enough for three people. I even wrote "in all seriousness" to denote that I wasn't being serious in the previous sentence.

examine a card slot before...

What was an unsuspecting victim supposed to see in this instance? How many people who block the keypad with their hand do so at an angle that would have prevented this skimmer from working?

Companies that service these ATMs or the banks involved should be on the hook for routine inspections. This is way beyond what the average person should be able to detect.

Don't be lulled into thinking that ATMs in real banks aren't

also vulnerable to having skimmers installed in them. Criminal ingenuity and 3-D printing have made it possible to fabricate very difficult-to-detect, easy-to-install skimmers.

It is also possible to install a skimmer at a store register, particularly large stores that have multiple registers; e.g. if a register is closed or there is a self/checkout lane that store personnel aren't watching closely.

This isn't helping me

Go to this site

This site has a bunch of photos and an exhaustive discussion of skimmers.

Hyundai to pour $400 million into artificial-intelligence foundation in Kendall Square
If you want to sue after your kid gets screwed by a public school, you have to notify the mayor first, not the superintendent, court rules
Red Line riders don't have a prayer when a train dies at Kendall Square
Pfizer, Covid-19 vaccine partner sue maker of failed vaccine to keep it from claiming they stole from its patents
Red Line riders lose any glee due to dead train at Kendall/MIT
Smoots Forever