Rain holds off long enough to let Dorchester celebrate itself 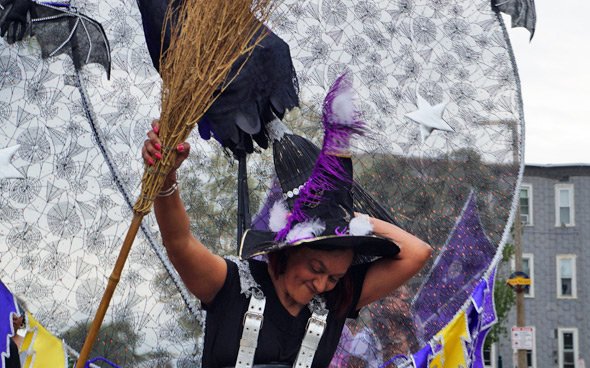 Did she cast a spell to hold off the rain?

Some of the musicians prepared for the rain that mostly didn't fall: There were, of course, plenty of dancers: Dorchester's large Vietnamese community had several floats and groups, including veterans of the Vietnam War - clad in their original South Vietnamese uniforms: One float proved Dot is out of this world: Dot Out was followed by a couple of angels from a local Baptist church: Nobody would mistake the Dorchester parade for the South Boston parade: Roughly 450 candidates for Suffolk County register of deeds marched, including Doug Bennett, who had, of course, the largest handmade sign in the parade - and somebody else to hold it: ... next Saturday, there'll be the parade, streets closed, etc., etc..

"Nobody would mistake the Dorchester parade for the South Boston parade:" .... Pretty inflammatory to suggest black lives don't matter in South Boston.

Adam can't help himself from

1. The photo has "Peace" in it, and peace groups have historically been banned from the South Boston Parade, being forced to march in a separate parade.
2. If you really think South Boston would allow a group from Black Lives Matter to march in the south boston st patricks day parade, you are delusional.

Too bad the conversation has

Too bad the conversation has switched from a (somewhat rare) positive post about Dorchester to a negative one about Southie. Adam, with all due respect, you kind of hijacked your own post.

There's a reason I like going to the Dorchester parade

We can get off the train at Ashmont (or Fields Corner for that matter) and get a good seat on the curb five minutes before the parade starts.

No public drunkenness, no brawls, no spilled beer or vomit, at least not in all the times we've been going, just people enjoying the parade.

If that be hijacking, then, yes, I'll make the most of it.

I may not have articulated my

I may not have articulated my comment correctly. I from time to time visit Dorchester as well. Dorchester gets so much negative press, obviously from mainstream local media, that when you wrote about the Dot parade, I didn't understand why you had to turn part of what was a postivie story about Dorchester into a negative story about Southie. It's about the Dot parade and this has nothing to do with the Southie St. Patrick's Day parade. When I'm in Dorchester or any other neighborhood of Boston, I'm certainly not thinking about Southie. When I'm planting flowers at my relatives' graves at Cedar Grove, I'm not thinking about dbags in Southie, I'm thinking of what a peaceful place Cedar Grove is in Dorchester. Usually I then go out for lunch nearby and I'm having a nice lunch in Dorchester, not thinking... what would it be like in Southie right now. For the record, I know several people who live in Southie -- some born and raised and others who moved there as adults. They are not all racist drunks. That's acutally a pretty hurtful accusation. Yep, my cousin has an Irish last name and guess what: he's not a racist and not a drunk; he has a decent job, put himself through college on scholarship and is all around a decent caring guy. The ladies who work at my dentist's office: Irish last names and they are NOT drunks and NOT racists.
Back to the parade bit: if you don't like drunken parades, you would definitely not like the gay pride parade in the Back Bay/South End. It's pretty raucous -- people are dancing, drinking showing some skin and having a FUN time and a celebrating PRIDE -- it's AWESOME! Sorry we won't see you there!

I don't know what Pride parade you go to

But the one that goes down Charles Street is a lot of fun and I have never had any problems taking my daughter to it (ditto for other folks; scroll down for the toddler photo).

Please note I didn't say I have a problem with everybody who lives in South Boston - just some issues with the parade. I know some people who grew up and/or live in Southie, too (I know, it's just goshdarned amazing) and they're fine, decent, very nice people. And I'm sure there are lots of places along the route to enjoy the parade without worrying about what happens if you accidentally bump into some drunken guy; they're kind of hard to get to by public transportation, though.

I was trying to give an

I was trying to give an honest reply. Sorry to bother you. Please contine the usual bashing of people from Southie every chance you get.

Was trying to give you an honest reply. Sorry you can't accept that people have different opinions on things.

Adam made a relevant comment, and the PC police on the right freak out.

gaffin made a completely irrelevant comment, and the pc police is freaking out after he got called out.