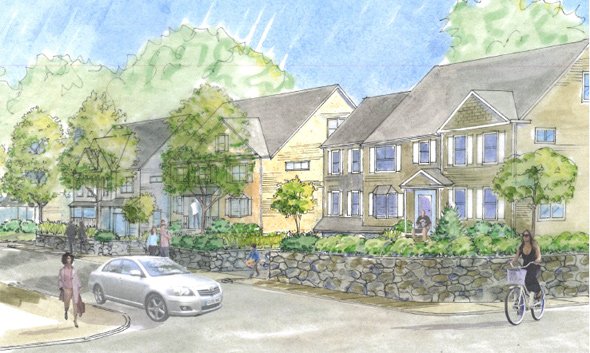 In an era when developers seem to be competing to see how many apartments and condos they can cram into Boston, one developer has proposed converting nearly 8 acres of scrubland between Washington Street and Thrush Street in West Roxbury into a series of stand-alone houses.

In a filing with the BPDA this week, CAD Builders of Canton says its proposed "swath of single family homes," each with multiple bedrooms and each with its own unique design on land formerly used for storage by the Todesca landscaping supply company, would fit right in with the existing single-family homes of the nearby bird roads. And it would be better than the sort of multi-family units already on and going up along Washington Street - including on the site of the old Todesca place, the company says.

Besides, CAD continues, homes would certainly be a better use for the land than the old landscaping stuff - or the quarry that neighbors the land on one side.

CAD is familiar with the surrounding neighborhood - it's built several houses there.

CAD proposes to set aside 1.5 acres for permanent open space.

Each of the homes would sit on at least 6,000 square feet of land.

Neighborhoods:
West Roxbury
Topics:
Development
Ad:
Like the job UHub is doing? Consider a contribution. Thanks!

29 rich home owners who are outraged that a quarry is being allowed to operate next to their house where they are trying to raise their kids.

Yeah the wrong side if they want to stay AWAY from the quarry. They will basically abut the quarry.

If they can get the quarry to

If they can get the quarry to stop blasting, which shakes my entire house regularly, I will welcome them to the neighborhood with open arms.

I'm really curious how the locals will react to to this. On one hand it is 29(!) more families worth of added TRAFFIC and SCHOOLS and god knows what else, But on the other, they are singly family units so that means there won't be any *cough* "transients" living there...

I'm sure the locals don't want anything

No matter what is proposed, the locals anywhere never want anything. They want everything to stay exactly the same forever.

This is a bit of a different part of West Roxbury

I've been to some neighborhood meetings about proposals along there and while there were, of course, issues raised, it was nothing like the hellfire rained down on the proposal to replace an abandoned factory on Lagrange Street with apartments.

Have you looked at the potential for compounding the already

"Build Absolutely Nothing Anywhere Near Anything" (or "Anyone")

No shortage of those.

Sorry, I wasn't talking about this specific project in WRox, I was talking about any project anywhere, from Boston to the outer burbs. People don't want anything.

"No matter what is proposed,

"No matter what is proposed, the locals anywhere never want anything. They want everything to stay exactly the same forever."

Most young people, who are more often transients who rent and are new to the neighborhood, never go to those meetings. Therefore the "neighborhood" is often represented by property owners who only care about the value of their property and a general resistance to change.

Plus there are people who have never taken an economics class and think new development would raise prices. Which makes no sense, because if you raise supply at a rate higher then demand then prices will inevitability go down (compared to inflation). If the opposite happens (which is what has happened the past 30 years or so), then prices skyrocket.

The developer probably made a calculated decision because they don't want the fight that comes along with a higher-density project. This proposal is fine, but is no more righteous than a larger one would be.

No moral judgments on my part

Sorry if it came through that way. It's just that I've been writing up tons of development proposals over the last couple of years and it's amazing to see what's essentially a smaller version of a suburban subdivision being proposed these days in the city of Boston. I mean, just yesterday, I also wrote about the controversy over a plan to replace a two-family house with an eight-unit building in South Boston.

That particular piece of land is an interesting one in terms of development because, it's all single-family homes on one side and apartments/condos on the other (including a 46-apartment building now going up where the old Todesca building used to be).

But you're probably right about single-family homes there being a much easier path for the developer than apartments or condos. In part, that's because the developer specializes in single-family homes. But in the end, this is, after all, West Roxbury, even if we are talking about land partly between a quarry and the apartment/condo buildings of Washington Street (still, this isn't the West Roxbury everybody thinks about when they hear "West Roxbury," so who knows?).

Using phrases like "developers seem to be competing to see how many apartments and condos they can cram into Boston" feels negative to me but so be it.

While this is the City of Boston, it is also, indeed, West Roxbury so I wouldn't make the argument that single family homes don't fit into the neighborhood, and the developer definitely made a calculation that they can sell out at around $1m each so why bother with the fight?

The 29 new homes will decrease market pressure and provide badly-needed new housing stock in West Roxbury, so I'm happy about that, but we really need new development of all scales and scopes throughout the city (and beyond!!!)

I think the important

I think the important question we need to be asking, though, is whether we would get such low-density proposals if the zoning laws didn't make it so easy for aggrieved neighbors to derail a larger project. I mean, this parcel is huge, and using the usual units-per-acre formula, and building only 7 story buildings, this space could fit almost 1,500 units of new housing, which would easily be enough to justify building out the additional bus lines needed to support them. Instead we house...29 families.

That probably helps in the developer's calculation as well.

The single family use here is a natural extension of the existing street grid.

That part of Roslindale/West Rox is experiencing the same boom that JP was five years ago, as people are getting priced out of anything closer to the city. 2500 sq ft new construction single-family homes are probably going to be anywhere from $1.1 million up. Which of course makes me wonder: who are these families who can swing seven-digit mortgages, and are so desperate to live in the city that they'll drop over a million dollars on a cookie-cutter single-family on a bus line a mile away from any of the actual amenities that make it worthwhile to live in a city?

Number one public school in the state!

Honest answer- I'm not sure. If this was in a leafy street near a commuter rail station, I would understand it a lot more.

Bit of a gamble

It’s not like you can wait and see if little Megan gets into BLS and then drop a mil on a house on the behind of West Rox. You’d have to buy it the year before. Are there really people who do this?

Considering the percentage of kids who get enough Sumus Primi in the first two years and leave for greener pastures (is it down to one in five yet?) and it looks like a stupid bet.

who bought a big condo in Southie in 2005 for under $200k and is sick of what that neighborhood turned into, won't mind the extra 30 mins on their commute in exchange for not living with someone above and below them complaining about their music and blocking their attempts at home improvement through HOA by-laws. Their profit can be turned into a tax-free down payment on their new million dollar house.

The same people who are dropping that kind of coin in Milton, Needham, Westwood, and a host of other municipalities in the area. That, and BLS, though if that falls through and they have boys, Roxbury Latin and CM are walking distance.

who are these families who

who are these families who can swing seven-digit mortgages, and are so desperate to live in the city that they'll drop over a million dollars on a cookie-cutter single-family on a bus line a mile away from any of the actual amenities that make it worthwhile to live in a city?

This is such a typical West Roxbury NIMBY reaction. I hear this all the time. Who cares who they are? Are you mad because they can afford to drop a million on a house? If they can pay the mortgage and want to buy, thus raising nearby property values, good for them. Just because you can't do it, doesn't mean that there aren't many others that can.

What a waste of space.

What a waste of space.

Locals would say the same thing

I doubt this suburban development will regularly see a ratio of 5 walkers/bikers per car.

Even their own traffic studies found that 80% of people who live here drive to work every day. But giant parking lots rendered in soft pastels don't have nearly the same je ne sais quois.