Letter from Alexander Hamilton to the Marquis de Lafayette could be on way back to state archives, some 75 years after it was stolen 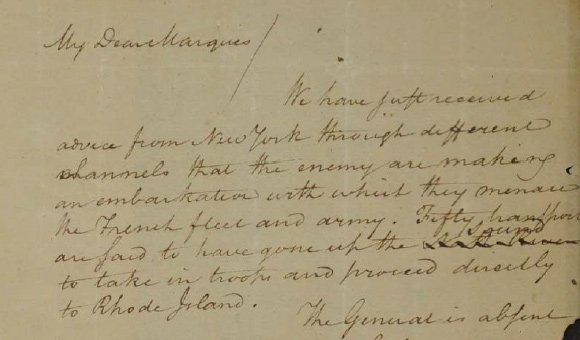 The US Attorney's office in Boston has begun the legal process to formally return a Revolutionary War missive from Hamilton to Lafayette to the Massachusetts State Archives, some 75 years after it was stolen by a worker there who was stealing and selling historic documents written by such authors as Washington, Franklin, Revere and Benedict Arnold.

The framed letter, which Hamilton wrote on July 21, 1780 to advise Lafayette of British naval movements in Long Island Sound, popped up last November when a South Carolina family delivered it to an Alexandria, VA auction house to sell.

The auction house estimated its value at between $25,000 and $35,000 - but then a worker checked a National Archives site on Revolutionary-era documents and discovered a copy of the letter's text along with a notation that the letter was "missing" from the Massachusetts archives. The text came from a photostat the state had made of the document in the 1920s.

According to a suit filed yesterday in Boston federal court by the US Attorney's office, technically against the document itself, the family that had the letter believes a deceased relative bought it in the 1940s from a rare-book and document dealer in Syracuse, NY. The archives worker was arrested in 1950.

The letter is already back in Boston - in the custody of the FBI. The US Attorney's office is asking a federal judge to start a process in which the existence of the document will be advertised on a federal forfeiture site for 30 days, to allow for a possible hearing at which people could object to the government formally taken ownership of the document to return it to the state.

Topics:
History
Free tagging:
Revolution
Ad:
Like the job UHub is doing? Consider a contribution. Thanks!

I'm happy that there are people who look out for such things and help to bring them back to where they belong.

I don't think either the

I don't think either the document or it's retrieval is as romantic as you make it out to be.

The provenance of the document was researched not to ensure it found it's way to the rightful owners, but to make sure the auction house is not on the hook for trafficking in stolen property.

Besides, the content of the letter was already on a photocopy. No history was going to be "lost" and the document wasn't as risk of being destroyed. It's just a historical document valued at $25k-$35k because it's rare.

It's cool to have this letter that was handled by men so important to our history. I'm glad it's coming back.