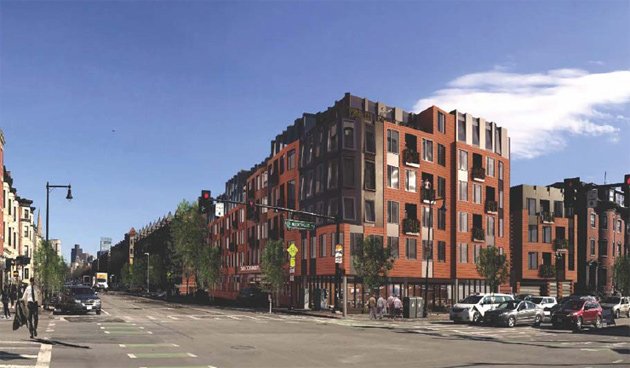 New Boston Ventures has filed plans with the BPDA to replace the Harriet Tubman House on Columbus Avenue at Massachusetts Avenue with a six-story condo building that would feature a "social enterprise cafe" called the Hi-Hat and space for programs run by the United South End Settlements - which is selling the site to the developers and plans to use the proceeds to renovate its other building on Rutland Street and to support its community programs.

Of the 66 condos, 11 would be built as work/live spaces for artists on the ground and second floors, the developers say in a filing with the BPDA. Some 17% of the units - 4 percentage points more than the city requires - would be sold as affordable, New Boston Ventures says. The non-artist condos would be a mix of one-, two- and three-bedroom units. The new building would have a 42-space garage.

The cafe's name is an homage to the jazz cafe that long occupied the site. New Boston Ventures, with offices on Tremont St., said it has already helped five of the six non-commercial tenants now in the Harriet Tubman building find new space, and that it will work to move or reproduce Jameel Parker's current mural on a wall of the building elsewhere.

The ground floor commercial uses will introduce transparency to the Project site and will activate the pedestrian experience at this corner. Streetscape features including street trees, light poles, trash/recycling receptacles, public bike racks and benches will be incorporated and/or enhanced as part of the Project’s associated public realm improvements. ...

The social enterprise café, to be officially named The Hi-Hat in honor of the famed jazz club that once occupied that corner, will be located at the corner of Columbus and Massachusetts avenues. The exhibit gallery will help to highlight the rich cultural heritage of the neighborhood. A “pocket garden” will line the edge of the Project Site along West Springfield Street, and will add a year-round visual amenity to the residential streetscape.

USES began looking for a buyer in 2018 after concluding it couldn't afford the repairs the building needs, especially because most of its programs were running at a deficit. New Boston Ventures says it will grant USES roughly 2,300 square feet of space at no cost in the new building for a gallery and other programs.

The developers hope to begin 18 months of construction late this year.

As a neighbor of this site

As a neighbor of this site who's been following this whole process... setting aside the controversy around USES's selling of the site to begin with, concerns about how this will impact the neighborhood, the loss of yet another long-standing institution of the Old South End in a gentrifying area... I don't hate the rendering, but 17% affordable seems way too low.

At six stories, this is (I think) lower than the as-of-right height for this lot, so I wonder if the developer is expecting to add affordable units in exchange for additional height?

At least according to the BPDA filing, the building meets the site's zoning, but needs to provide proof it won't harm groundwater discharge.

I agree that the IDP requirement should be higher than 13%, but in this case they're exceeding it. Also, in a rare move, they're putting the units on site instead of contributing the the fund. It would be great if the neighbors and city could convince the developer to do even more, but it would be better if the laws were updated.

Read the article:
"Some 17% of the units - 4 percentage points more than the city requires - would be sold as affordable"

too low for the area

Too low for the area, and what that building represents. There will probably be 1-2 black condo owners in the entire building. You and others will see that as normal acceptable and fair. Black people wont-but we are too tired to fight.

Why does affordable housing

Why does affordable housing have to be limited by race? Segregation is wrong!

There's zero affordable housing on-site, and USES just doesn't have the money to fix up the building itself.

The developer has to pay USES for the property, and USES is getting free space in the building. The affordable units probably don't bring in enough money to pay for the cost of constructing them, so basically the 55 market-rate units in the building have to cover the vast majority of the costs and make it worthwhile for the developer to move forward with the project. You probably don't work for free and neither do they.

...the original was on Holyoke Street. The current one (a 70s-era maintenance money pit) will be replaced by new construction on Rutland Street. At a commiunity meeting, the developer said they plan to preserve the mural on the entrance wall.

I agree that the affordability is low. I cannot open the submission so does it say what level of affordability they are targeting? Also, are the artists lofts in addition to the 17%? The cafe sounds nice but will be interesting to hear more of the details. I'd be fine with a higher bldg if that means more affordable homes.

All of this is to say that the building should have never been sold and under the pretense of fixing USES's finances. They just laid off 10 staff (and another senior exec quit) and an operating budget should never be balanced off of an endowment or financial windfall such as a property sale. Shame on USES for selling this community treasure and impacting six non-profits.

Boston to keep several street changes originally made for the Orange Line shutdown
Giving a hoot about the South End
Man standing in the middle of Washington Street in the South End objects to being asked to move, so hurls a full can of beer at T bus driver's window
Two councilors say part of the answer to Mass and Cass might be locking people up for treatment whether they want it or not
Tents return to Mass and Cass
Before the Orange Line shut down, officials hired shuttle buses and urged people to not drive downtown - in 1987