In span of 20 minutes at zoning board, Mattapan apartment proposal is approved, rejected, deferred, then, finally, approved 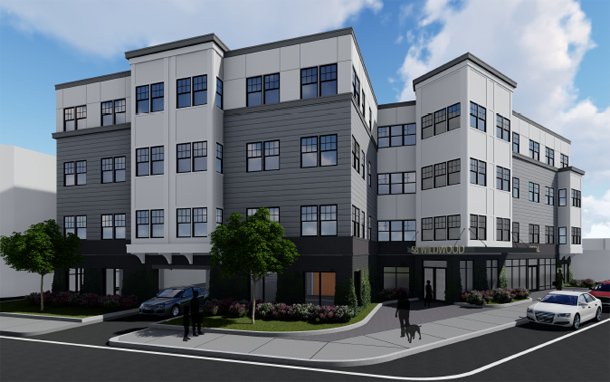 The Zoning Board of Appeal today approved a 27-unit apartment building at 775 Morton St., on the corner of Wildwood St., after confusion caused by a shortage of members due to holdups by city councilors on questions for proposed new members involving marijuana-related zoning.

The marijuana issue had nothing directly to do with developer Anthony Ruscitto's proposal, except it meant only six zoning-board members heard his case, leaving him with little room for margin - the board requires a two-thirds favorable vote for a project to be approved.

The board actually voted 5-1 in favor of the project - with member Bruce Bickerstaff casting the lone vote against - but board Chairwoman Christine Araujo declared the vote was not sufficient and that the project was denied.

At the request of Ruscitto's attorney, John Pulgini, the board then agreed to withdraw the motion on the project and let Pulgini ask for a deferral on the vote - on the hopes that by the time the board could next get to hearing the proposal, it would have seven members. After a recess - and after residents who had opposed the proposal had left - Araujo announced that due to confusion over the quorum issue, she had incorrectly ruled the project denied.

Member Craig Galvin then moved to approve the project, the vote was once again 5-1, but this time Araujo ruled the project was approved. She asked the mayor's neighborhood liaison to forward word to the opponents who had left.

Ruscitto's proposal calls for a four-story building on what has long been a vacant lot, with ground-floor retail space and a 29-space garage accessed through Wildwood Street. Four of the units will be sold as affordable.

The mayor's office supported the proposal, but some residents said the building was too tall and too dense and would cause traffic problems because of the way the way the busy Morton Street curves near the site.

The BPDA board approved the project in January.

Renderings and other documents related to 775 Morton St.

The opponents to the proposal had left before the Board reconvened. Did the developer and his attorney leave as well, or did they stay?

Thanks for reporting this. Even for the ZBA it was a circus.

There is a distant pot shop connection as the dissenting vote member is an investor in the American Legion Highway proposed pot shop.

As for Bickerstaff, yes, he's an investor in the proposed American Legion shop, but it's not like he had to recuse himself today - unlike with every pot proposal before the board.

Interesting that they stayed. Lesson to remember--if you oppose a project, don't leave until the proponents leave.

Good point about Bickerstaff recusing himself from all the pot shop proposals. I hadn't thought of that.

A new low, even for the ZBA. They are worse than the Rockland Board of Selectmen. The average junior high student council does a better job at following procedure. Of course, who cares about procedure when people in the room can't even hear the speakers because the PA system is inaudible. Forget procedure. Forget the Zoning Code. Forget the Enabling Act. Andrew Lelling should watch the youtube videos. Plenty of laughs.

Obviously a procedural mess, but ultimately the right decision. Sorry not sorry, NIMBYs.

but some residents said the

Adam, do you have a copy and paste for this to just insert into any article about new housing to save yourself some time in the write-ups?

This treatment of this case

This treatment of this case by the ZBA is both amusing and quite concerning at the same time. The headline of the story is little gem that sums it up very well!